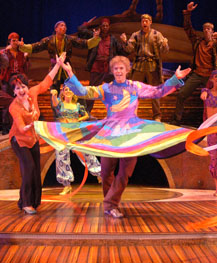 “We all dream a lot, some are lucky, some are not,” but this is a story about a boy whose dream came true.

'Joseph and the Amazing Technicolor Dreamcoat,' the irresistibly upbeat musical about the trials of Joseph, Israel's favorite son, tells the tale of betrayal and hardship – triggered by a talent for interpreting dreams and a multicolored coat – and ultimately forgiveness.

Although it may be a before-our-time-story, setting-wise, the uplifting nature of the musical has carried over for decades now continuing to impress and amuse theatergoers.

Running for a limited two-week engagement only, 'Joseph' stars Patrick Cassidy (yes, he's the teen heartthrob David Cassidy's brother) in the title role, who has spent many years on stage. And Amy Adams, best known as a finalist in the third season of “American Idol” makes her Broadway debut as the Narrator.

Andrew Lloyd Webber and Tim Rice's popular musical began as a 20- minute pop-cantata for a school Easter concert back in 1967, it was expanded in the '70s and made its Broadway debut in 1982. Since then, it has since gone on to charm audiences year after year with its excitement, energy and eclectic mix of music and dance.

From rockabilly, to folk, to gospel, to traditional Broadway themed tunes, the music is a smörgåsbord of diversity, and so are its characters. For example, the Pharaoh's Elvis-esque resemblance, and the rock vibe of “Song of the King” gives the play a nice, humorous kick.

In this retelling of the Biblical story, Joseph is a handsome young man who is his father's favorite child and able to interpret dreams. When his father gives him a multicolored coat to wear, Joseph's 11 other brothers become excruciatingly jealous of him. In a plot to get rid of him, they sell him into slavery.

After, passing the advances of his owner's wife, Joseph is sent to jail. Once in jail, he quickly becomes popular due to his ability to interpret dreams. The Pharaoh, soon hears of Joseph's ability and gives him the post of No. 2 man in Egypt. Years later Joseph's starving brothers arrive in Egypt to ask him for help – unaware that their brother is still alive. In return, Joseph gives his brothers a scare but eventually gives them what they want and reveals his identity.

'Joseph' is the perfect play for anyone who likes elaborate and colorful song and dance numbers looking for something with a lot of heart. But most importantly, this musical is for anyone with a little dreamer in them. So what are you waiting for? GET UP AND GET OUT!