Interpol looks to exit its moody cul-de-sac on ‘Marauder’ 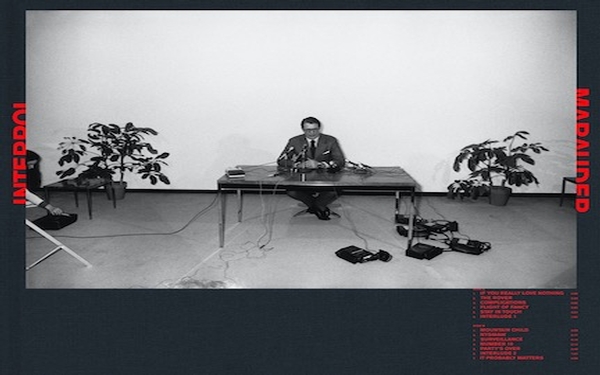 Cover art for the album "Marauder" by Interpol. (Matador)

It’s surprising that it took six albums for Interpol to release a song titled “Surveillance,” but it finally arrives on “Marauder” (Matador). It’s emblematic of an album that tries to respect the band’s past while pushing beyond it with a danceable rhythm and a brighter than expected chorus.

The trio, once part of the next-big-thing wave out of New York in the early 2000s that included the Strokes and Yeah Yeah Yeahs, made its mark with overcast songs that all suggested a scene from a noir movie in which the characters wore tailored suits, smoked cigarettes and sported discreet Joy Division tats. Nostalgia-act purgatory loomed when Interpol marked the 15th anniversary of its 2002 debut album, “Turn on the Bright Lights,” with a 2017 play-the-hits tour.

But “Marauder” isn’t content to recycle the past. Dave Fridmann — whose production credits include psychedelic gadflies the Flaming Lips, Mercury Rev and Tame Impala — was brought on board to spruce things up, and he ramps up the prominence of drummer Sam Fogarino in the mix. His presence is immediately felt in the swinging leadoff track, “If You Really Love Nothing,” beneath Daniel Kessler’s tolling guitar and singer Paul Banks’ shadowy anxiety: “On what future do we build illusions.” It’s one of Interpol’s best recent songs, but its standard proves difficult to maintain on what is in many ways a typically hit-and-miss latter-day Interpol album.

Fogarino’s propulsive foundation and the layered haunted-house backing vocals keep “The Rover” moving, but the vague soul accents in “Complications” and the gothic overtones of “Stay in Touch” sound like genre exercises rather than fully fleshed out songs. The surging “Mountain Child” builds a giddy momentum even as it glances ruefully backward, “We used to rule back then … What did we used to rule back then?”

The letting go of what was — that’s the hardest part, and as long as Interpol continues to reference the mood and menace of its earliest recordings, its new work will continue to suffer in comparison. A handful of songs on “Marauder” point a way forward, no more so than “Number 10.” It’s a toss-off about an office romance that’s buried near the end of the album. But it feels free, insouciant, less burdened by the need to be poetic, dark and mysterious. And also, crucially, it rocks as if the band performing it has nothing to lose.