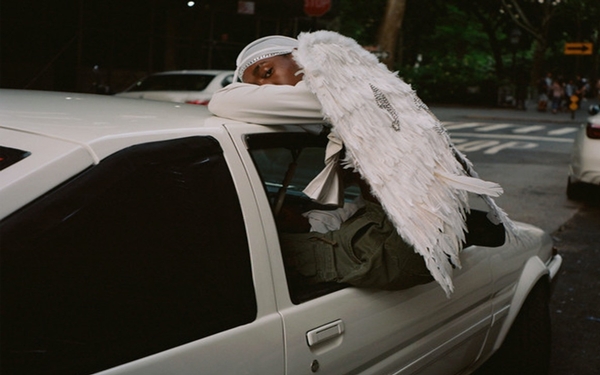 Given Devonte Hynes’ impressive trajectory over the last few years — from respected indie-rock artisan to trusted collaborator of pop stars like Solange and Kylie Minogue — perhaps it shouldn’t come as a surprise to find that Hynes wangled a cameo from no less a figure than Puff Daddy for his fourth album under the name Blood Orange.

What does upend expectations, though, is Puff Daddy’s contribution to “Negro Swan”: not the type of showman’s boast he’s been peppering songs with since the mid-1990s but a tender description of his innermost anxieties.

“Sometimes I ask myself, you know, what is it gonna take for me not to be afraid to be loved the way I really want to be loved,” the veteran rapper and impresario says over a florid piano lick in the song “Hope.” “I’m scared to really, really feel that.”

The spoken confession, part of a trove of material Hynes says Puff Daddy sent him after declaring himself a fan of Blood Orange’s previous record, encourages a new way of looking at the king of the Bad Boy empire. But that’s why artists keep flocking to Hynes as a producer and songwriter — to tap into the radical sensitivity that he displays with more skill than ever on “Negro Swan.”

Full of breathy vocals, lush synths and chewy R&B grooves, the album ponders the costs of life as a member of a marginalized community; it’s about what it feels like to be bullied (“First kiss was the floor,” Hynes sings evocatively in the opener, “Orlando”) and to contend with the unreasonable pressure of being made to represent an entire race or gender or sexual identity.

As usual, Hynes narrates his stories with vivid detail, both musical and emotional: the image in “Saint” of someone whose “skin’s a flag that shines for us all,” the liquid guitar playing in “Charcoal Baby,” the exuberant gospel runs by Ian Isiah that connect “Holy Will” back to the vintage Clark Sisters devotional on which it’s based. (In addition to Isiah and Puff Daddy, “Negro Swan” features appearances by a diverse cast of folks including ASAP Rocky, Steve Lacy of L.A.’s the Internet and actress Amandla Stenberg.)

Yet for all his ability to put you deep inside the experience of vulnerability, Hynes’ stance here isn’t a weak one. There’s pride in his account of survival — and defiance too.

Throughout “Negro Swan,” the writer, director and trans activist Janet Mock (known for her work on FX’s acclaimed “Pose”) delivers a kind of running monologue about how other-ed individuals find affirmation in a culture that too often reduces them to caricature.

As she puts it in “Family,” one means of doing that is by seeking out spaces where “you show up as you are without judgment, without ridicule, without fear or violence or policing or containment.”

Hynes’ bold and moving album feels like just such a space.