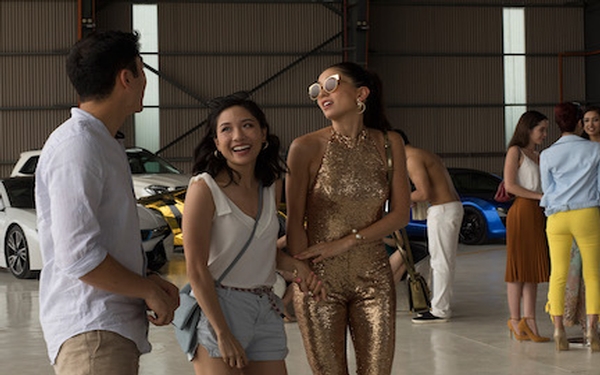 After chemistry class on a recent weekday, sophomore Katherine Ho sat at an outdoor table in USC Village and shared the chain of events that made the pre-med student’s rendition of Coldplay’s “Yellow” appear during the climactic scene in the box-office topping movie “Crazy Rich Asians.”

As students pass on scooters, skateboards and foot, Ho describes “a series of surprises” that led to her voice being featured in the film.

Her story involves a singing camp, a tip from a former teacher, a series of February rehearsals in a freshman dorm and a big reveal, all in service of a song about a hue with meaning that extends far beyond its place on the color wheel.

Sung in Mandarin, Ho’s “Yellow” moment in the movie wasn’t a foregone conclusion. Its placement sparked active behind-the-scenes conversations in the music department on the intricacies of language and lyrical intent. Licensing the song even required a personal plea from director Jon Chu to members of Coldplay that spoke to the history of Asian representation in pop culture. For her part, Ho was one of dozens vying to cover “Yellow.”

A first-generation Chinese American from Woodland Hills, Calif., the 19-year-old is a lifelong singer who has performed on the NBC singing competition show “The Voice.” She is also minoring in songwriting at USC.

Says Ho, “It’s really cool that this word — yellow — and the song have a deeper meaning past just the plot of the film.” She and her friends, she adds, “were never that proud to call ourselves ‘yellow.’ It definitely had a lot of negativity associated with it.”

The chance to shift its meaning came in February. Ho received a text from a former voice teacher asking whether she’d “be down to submit a demo for an unnamed film and TV project,” she says. “He was looking for a young girl who could sing Mandarin.” Ho grew up in a Mandarin-speaking household, and “Yellow” was one of her favorite songs.

She got to work.

Despite the fact that she was starting her second semester as a freshman — and was already overwhelmed with studies — late one night, she got her dad on the phone to perfect the Mandarin lyrics for “Yellow,” working line by line through meanings and inflections.

“I actually fell asleep at the piano and woke up the next morning and recorded it before class,” Ho says.

Ho auditions for a lot of stuff, so she filed the session in her memory bank and returned to her biology classes. When she found out she got the job, she still didn’t know how it would be used. She was told to show up at a Burbank studio, but it wasn’t until about an hour before the session that the studio team called to tell her the song was for “Crazy Rich Asians.”

“I freaked out in the car with my dad, who was there to help me with the dialect stuff,” Ho says.

“After I found out it was going to be played at the very end of the film, it freaked me out even more.”

That ending song was one of a number that Chu and music supervisor Gabe Hilfer had contemplated when brainstorming the movie-ending sequence. Hilfer says that after Chu suggested the Mandarin version of “Yellow,” the scene locked into place.

Given the word’s loaded, oft-derogatory meaning, Hilfer recalls “spirited conversations about it in post-production just to discuss, ‘Is that something we should be concerned with?’ It was not something that slipped under the radar.”

Released in 2000, Coldplay’s vaguely structured lyrics offer ample opportunity for interpretation, Ho says. “For me, the song’s about taking a risk. Not really knowing for sure whether or not this love is going to pay off and being very hesitant. But in the end, you go for it, and you are brave.”

For “Crazy Rich Asians” director Chu, “Yellow” resonated as a kind of anthem, he wrote in a letter to Coldplay after the group initially declined its use in the film. Penned to the individual members of the band, Chu’s note, which was provided to The Times by Warner Bros., describes the song as “an anthem for me and friends (that) gave us a new sense of pride we never felt before.”

The words, he said, offered such “an incredible image of attraction and aspiration that it made me rethink my own self-image.”

Ho said that after she read Chu’s note, she felt the song even more deeply.

“I could almost quote the letter now because I’ve read it so many times,” she says.

“The second we heard it, Jon loved it,” Hilfer says. The team had debated hiring an established artist to handle the rendition, but that didn’t seem necessary. Hilfer recalls them concluding that “the song is already famous, so why don’t we just get somebody who’s incredibly talented?”

A few days later, Ho was in the studio, and a few months after that, she and a friend went to an early screening. During the exuberant closing scene, she heard herself “put a Mandarin twist on one of my all-time favorite songs.”

Throughout the movie, she also saw images of the China she knows and loves through her and her family’s annual trip to Beijing to visit her grandparents and extended family.

“Traditionally, Asian people put family first — and in America, it’s about finding your own passion.”

Referring to the stereotype of strict, success-focused Asian mothers, she adds: “I feel like ‘tiger moms’ are portrayed very negatively in the media. This movie shows that the love of an Asian parent does seem very strict at first, but it comes from a place of deep love.”

Her own parents aren’t so strict.

“It’s actually kind of ironic,” she says. “A lot of people think it’s my parents forcing me to be pre-med. But my parents are actually more happy if I did music, because they think that’s who I am. They’re definitely 100 percent supporting me in music. But I’m just very passionate about biology and health care, so that’s why I’m pursuing the biology track right now.”

Now she says she’s onto a new challenge: “the whole what-to-do-with-my-life thing.”

Special Features
Digital theater is all the rage, but could it destroy the live stage?
234 views

Special Features
Intimate portraits piece together the puzzle of Natalie Wood, the person and mother
342 views

Special Features
Now’s the perfect time to dive into musicals. Here are our critic’s top 7 to watch
246 views

Special Features
Oscars 2020: Who will win and who should win
863 views

Special Features
Secret screenings. Redacted scripts. How they make the twists in ‘This Is Us’
355 views
bid=||