Hal: the revolutionary works and quirks of dir. Hal Ashby 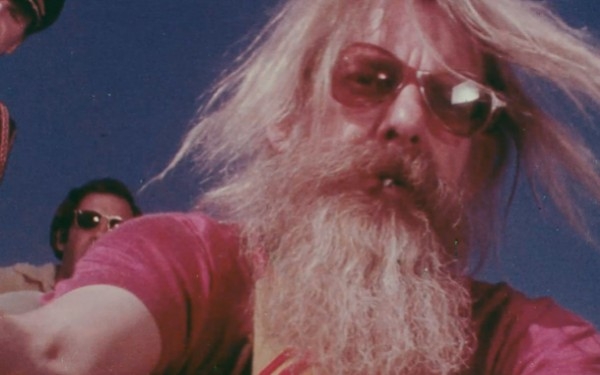 I dreamt about the old woman with the yellow umbrella for days, homesick for a life I didn’t know I wanted until I saw her. Funeral etiquette wasn’t really her thing--why cry when you can sing? Maude was about to turn 80-years-old and who better to spend her last days with than the strange boy with a knack for killing himself? Harold and Maude made me realize how odd the colors of our world are, and oh, how they make it a scrumptious world. It was as if I simply needed to tilt my head to the right and squint just a little bit to see that I could face the turbulent winds ahead. Bring it on. What’s better is that I am far from the only one affected by this film, or any of director Hal Ashby’s films for that matter, and finally we get to see the parade of these freaks flying the Ashby flag high in Amy Scott’s documentary Hal. It’s about time.

The influence of Ashby’s career is widespread and yet often soft-spoken. Having hit his directorial stride in the 1970s, smashing out films like Shampoo (1973), The Last Detail (1975), Coming Home (1978) and Being There (1979), Ashby found himself going up against some pretty big names like Coppola, Scorsese, and Kubrick. While his films--except for Harold and Maude, which the studios swept under the rug until the cult masses got their hands on it--were successful critically and commercially, their highly political and social themes made Ashby an unofficial spokesman for the counterculture. Naturally, this put him at odds with his bosses at the studios.

In Scott’s directorial debut, we are given a lively account of Ashby’s obsessive relationship with film. Starting with his major successes on the cutting room floor (where he won his only Oscar for In the Heat of the Night), and ending with a film being wrenched from his hands at the behest of a fed-up studiohead, Scott guides us through the complicated nature of Ashby’s personality that made him both a creative giant as well as a stubborn hell-raiser if things weren’t going his way.

Scott collects an impressive array of Hollywood’s best, past and present, to emphasize the scope of Ashby’s reach. Hal’s best friend Norman Jewison (dir. of In the Heat of the Night, The Thomas Crown Affair) reminisces about their early days spent on the studio lots doing nothing but smoking weed, cutting film, and fighting injustices--truly Hal Ashby’s holy trinity if he ever had one. Then we hear from contemporary filmmakers like Judd Apatow (40-Year-Old Virgin, Knocked Up) who have been haunted by the audacity of Ashby’s films throughout their film educations.

These types of testimonials, while strong on their own, are only elevated further by interviews with the non-Hollywood elite, his family, the people who didn’t care whether he ever held up a camera or not. This is where Scott earns texture to Hal as a documentary. This is also where a lot of the conflicts in his films start making a whole lot of sense.

While Ashby passed away rather suddenly in 1988 from pancreatic cancer at the age of 59, his career was a punch to Hollywood’s gut that’s left a bruise still to this day. Scott’s documentary, by showing the historical contexts of his films, emphasizes how Ashby’s work is increasingly provocative, poignant, and necessary. Each of his films in the 70s aims to spark a social conversation that was either being stifled or muted entirely, and those messages are equally expressive now.

His directorial debut, The Landlord (1970), for instance, dives straight into the uncomfortable conversation of gentrification and does not back down. Stars of the film Beau Bridges and Louis Gossett Jr. recount what it was like to film in the Park Slope neighborhood of Brooklyn in the midst of heated race conversations, and quite simply, Ashby wouldn’t and couldn’t have it any other way. The tension that Bridges felt from the community, even as he was acting, was the reality of the problem. Ashby needed that to be seen and heard, and didn’t give a flying f**k who it made uncomfortable.

The second decade of Ashby’s career may not have met nearly as much success as his first, and the distrust from the studios did eventually take a toll on his personal health and happiness,  but the beauty of Hal is that even with that melancholy, it is the faces of his characters that stand out over the unfairness of the system. Chance Gardener, Woody Guthrie, Maude, Copee… Each of them represents a triumph over normalcy, a declaration of otherness when the world demanded order. We replay these films to remind us that these fights and victories continue. This is Ashby's way of leading the charge.

Hal opens in NYC at the IFC Film Center on September 7th and in Los Angeles at The Nuart on September 14th. For additional theatre locations and to purchase tickets, visit Hal.Oscilloscope.net.