Kusama-Infinity: more than just a biography of an artist 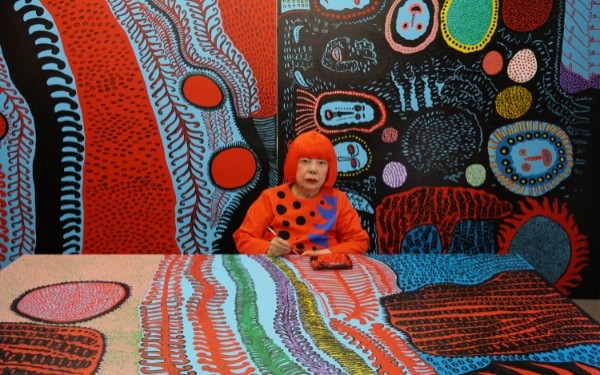 For being the top-selling female artist in the world, the name of Yayoi Kusama is somehow not a household name. Most of us would recognize her exhibition Infinity Mirror Rooms as it doused the feeds of Instagram, Twitter, and everywhere else social media socializes last year, and yet still, her name often doesn’t stir recognition. Leave it to general ignorance, racism, sexism, or somewhere in between, but the six decades of Kusama’s radical work still hasn’t solidified her place as one of the shapers of the Pop Art movement. In her first feature documentary Kusama - Infinity, director Heather Lenz explores this wider notion by taking us through the intimacies of the artist’s life, uncovering the systematic prejudices that sought to hold her back. While they ultimately contributed to problems of serious mental illness, Lenz doesn’t paint Kusama as a victim, but as an artist who fights her devils with paint, fights war with paint, fights intolerance with paint. Lenz wants you to never forget Kusama’s name again.

Born in the small agricultural town of Matsumoto City where her wealthy and conservative family owned a seed harvesting business, Yayoi Kusama’s early fascination with watercolor was met with little excitement. They were living through the second World War and her parents couldn’t see a future for Yayoi beyond the arranged marriage that she would inevitably have to partake in. Yayoi couldn’t see a future without painting. For years she had to stifle her passion, attempt to adhere to the life they expected of her, but it was when she discovered the work of American artist Georgia O’Keefe, a woman who could use color and texture to create emotion and strength, she realized she wasn't alone. She could be Japanese, she could be a woman, and she could be an artist.

The years that followed were frustrating to say the least. When she moved to New York City in 1958, Kusama was met with much skepticism and annoyance. She became obsessed with the image of undulating waves that she looked down on from her plane and she suddenly couldn’t paint anything else; mesmerizing and hypnotizing arrays of dots that somehow breathed when you looked at them long enough filled the canvases that filled her studio. Fellow artists were unimpressed by the simplicity. Gallery owners were perturbed by the small, stubborn, Japanese woman who wouldn’t stop hounding them at their doors.

How Lenz frames the people who turned a cold shoulder to Kusama despite her work’s undeniable originality, precision, and beauty is essential to the effect of Kusama - Infinity as something more than a biography of an artist. By showing artists like Andy Warhol, a white man whose name is synonymous with the Pop Art movement, conspicuously imitating Kusama’s themes and motifs, Lenz exposes the truth that art is not immune to exclusion, that creativity is still biased towards the privileged.

However unfairly she was treated, Kusama at any rate did not step back from her easel. In fact she took on even more mediums that gave her room to express the increasing restlessness and anger she felt inside. Lights, performance, film, protest, and textiles all found a space in her oeuvre as she began to cultivate a following of counter-culturalists. Naked happenings, as she called it, were sprouting up around NYC, purposefully attracting the media and photographers who would perpetuate the images she was creating on people’s bodies. She was truly instigating some of the first moments of social media.

We could say that Yayoi Kusama is an odd woman, surely, but Lenz wants us to realize why. Growing up in the shadow of WWII, facing enormous adversity as an immigrant, surviving suicide twice, and eventually checking herself into a psychiatric hospital where she still lives to this day--these are merely the bullet points. What’s more important is the experience of her work, where you can touch, step into, partake in the tic-toc of her mind. The stubbornness is there, the audacity is there, the tragedy is there, but so is lightness, humor, and compassion for the whims of the world around her, for they are infinite and they are both hers and ours.

KUSAMA - INFINITY is in theaters now!