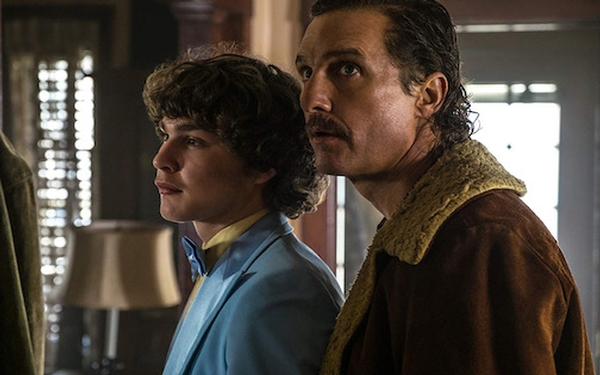 Even in the well-trod genre that is the ‘80s drug movie, the true life story of teen drug kingpin Ricky Wershe Jr., aka White Boy Rick, stands out. The baby-faced baller moved serious weight in Detroit in the mid-’80s, and the legend surrounding him is larger than the real, tragic story. Director Yann Demange’s film “White Boy Rick” balances these details, both outlandish and intimate, carefully.

For the film adaptation, Demange conducted a search for a non-professional actor to embody the young, streetwise Rick and discovered the remarkable 15-year-old Richie Merritt from Baltimore to star, his first acting role ever. Merritt is charming, authentic and incredibly watchable, but he gets a heavy-duty assist from his most frequent scene partner, Academy Award-winner Matthew McConaughey, in his full sleazebag mode as Rick Sr., a shady gun dealer.

Demange crafts an intoxicating world of ’80s Detroit, at once a ghost town and a vibrant scene all its own, and it’s clear why Rick wants in. Scenes at the local party spot, the Skate and Roll, are appealingly dizzying, hazy neon lights illuminating the dancers and dookie chains, the babes in sequins, the corrupt cops and city officials fraternizing with the dealers.

Rick, a daring, tough, but ultimately sweet kid who boasts an entrepreneurial streak like his dad, insinuates himself with the baddest crews in town. He’s an ideal mark for a pair of FBI agents (Jennifer Jason Leigh and Rory Cochrane), who groom him as a criminal informant for cash. Along with a narcotics officer (Brian Tyree Henry), they even push Rick into slinging rock himself to authenticate his cover. It’s never clear if he fully understands the possible outcomes of his snitching, just trying to stay one step ahead of the gangs and the feds.

Written by Logan and Noah Miller and Andy Weiss, the story of White Boy Rick has been a hot commodity since the publication of the 2014 article “The Trials of White Boy Rick” by Evan Hughes, which was nominated for a National Magazine award. Hughes details the myth of the teen Scarface, and the bewildering series of events and political corruption that led to his life imprisonment at age 17 under Michigan’s draconian 650 Lifer Law, which specified a mandatory life sentence for possession of 650 or more grams of cocaine (it has since been overturned).

“White Boy Rick” finds the best version of itself in its familial moments. Rick Sr. is ever the optimist, often to the detriment of his own family, but he never gives up on his kids. Bel Powley co-stars as Rick’s sister Dawn, a junkie for whom her father and brother never stop searching throughout Detroit’s crack houses. Bruce Dern and Piper Laurie also give memorable turns as his grandparents.

From the high life to life behind bars, this is ultimately a father-son story, and McConaughey transcends the wilder aspects of his character to deliver a stripped-down and touching performance of a man utterly devoted to his children, ultimately devastated by the failures of the state that led to his son’s imprisonment.

This film doesn’t hit hard enough as a drug-dusted fairy tale or a gritty criminal justice system indictment. But as a portrait of a family coming together and falling apart while beset by outside forces too strong to combat, it’s tender and tragic among the glitz and the grime.