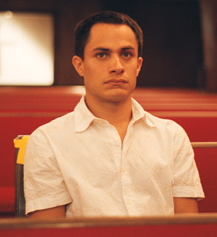 The King sometimes plays like a court jester who takes himself too seriously.

Often flamboyantly dramatic, the film is consistently self-aware. Its attempts at symbolism regarding sin and faith are astoundingly heavy-handed and further dampened by an ending that will be greeted with either silence or sneers.

Gael Garcia Bernal, star of Y Tu Mama Tambien and Bad Education, plays Elvis, whose chiseled, deceptively innocent face hides a torrent of conflicts. Just released from the Navy, he heads for Corpus Christi in search of his roots.

The Rev. David Sandow (William Hurt) holds the key to those roots. But he‚s hardly the answer to Elvis‚ prayers. Now a hellfire-and-brimstone minister, he was once the most wayward of youths. Elvis is the result of one of his liaisons with prostitutes. The good reverend is now a pillar of the religious right, a dutiful if dismissive husband and an overbearing father.

Few of the characters have understandable motivations. Elvis‚ wayward motives constantly change in service of the plot rather than characterization. He obviously awakens dormant hormones in Malerie, but her actions, particularly in a pivotal subplot involving her brother, are often hard to justify. Sandow and his spouse seem like overly protective parents. Somewhere along the line, they might have noticed Malerie‚s clandestine meetings with Elvis.

Hurt and Paul Dano, as his acknowledged son, register the strongest performances. Hurt captures the reverend‚s conflicted emotions, his humility before God and his arrogance toward humanity. The pastor has a showman‚s ego, which becomes painfully evident during an altercation with Dano.

Dano, with much less footage, is especially poignant as Hurt‚s high-school-senior son. His religious fervor wins the scorn of his classmates and the hostility of his father, who seethes when his son becomes the center of attention.

Otherwise, Garcia Bernal and James are casualties of the haphazard script, as is Laura Harring, as Hurt‚s much-troubled wife.

Director and co-writer James Marsh must bear much of the blame. It‚s possible his screenplay was subjected to awkward editing, but his goal of unforgiving tragedy is never attained. His direction is florid and choppy, and he should have taken heed of an overhead mike.

All of that, and the sex scenes border on the comically self-aware. The King is watchable, yes, but mainly for the wrong reasons.