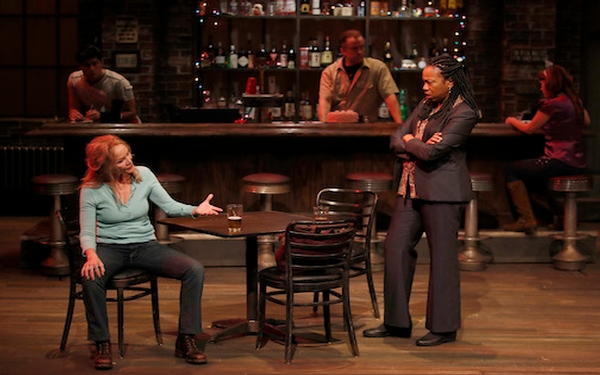 The state of the nation play has a long tradition in Britain, where playwrights are encouraged to think of the theater as a public forum, a place to debate issues of the day and track shifts in the collective narrative.

The genre, of course, has an American pedigree too. Arthur Miller and Tony Kushner have written urgent political dramas that have advanced our national dialogue. But for too long, our dramatists have been more preoccupied with family affairs and identity crises than economic realities and race relations.

“Sweat,” Lynn Nottage’s 2017 Pulitzer Prize-winning drama set in a faltering factory town in Pennsylvania, magnificently answers the call for more far-ranging American playwriting. Although much of the action takes place in 2000, the play, which opened Wednesday at the Mark Taper Forum, offers one of the most insightful explorations of the economic insecurity that has been fueling the political fury and racial tensions now engulfing us.

The story begins in 2008 with separate meetings between a parole officer (Kevin T. Carroll) and two young men recently released from prison. Jason (Will Hochman), who has a black eye and white supremacist tattoos, reveals a temper that could soon land him back in jail. Chris (Grantham Coleman), a soft-spoken African American who has turned to religion for answers, recounts running into Jason on the street and embracing his old buddy who upended his life eight years ago.

Nottage’s prologue introduces a mystery that will take time to sort out. What was the crime that sent Jason and Chris away for so long? The question has a TV police procedural ring to it, but the play changes tack to become a gritty social drama about factory workers in the age of NAFTA, who are about to have the carpet pulled out from under them.

The setting is a bar in Reading, a proud industrial town that is rapidly losing its identity as factory owners move their plants to Mexico, where labor is cheap and unions aren’t a headache. Stan (Michael O’Keefe), the bartender who suffered a disabling injury at the plant where he used to work, maintains a familiar rapport with customers he knows from his days on the factory floor. Lately, his conversation is filled almost exclusively with news of plant lockouts and the crackups of the unemployed.

Chris Barreca’s spacious set gives this blue-collar hangout a den-like character. But the most ingenious aspect of the scenic design is the way it takes advantage of the Taper’s tricky semi-thrust stage by heightening our proximity to the scene and fostering a sense of eavesdropping intimacy with the characters.

The production, directed with a firm narrative grip by Lisa Peterson, invites us to kick back with these regulars. Two characters dominate the scene: Tracey (Mary Mara), whose family has worked in Reading for several generations, is Jason’s mother. Cynthia (Portia), Tracey’s best friend and co-worker who also has roots in the town, is the mother of Chris.

Hard-boiled survivors, these women share a bond of sweat, having labored together for more than 20 years and now watching their sons join them at the plant. Both are survivors: Tracey is a widow, and Cynthia’s estranged husband, Brucie (John Earl Jelks), has developed a serious drug problem after getting locked out of his plant in one of the town’s many union-busting developments.

But Tracey and Cynthia also have happy memories of wild nights when there was more hope on the horizon. Hanging out at the bar with their friend and co-worker Jessie (Amy Pietz), who drinks so much that Stan inevitably has to take away her car keys, is still a necessary release for them.

Nottage paints a portrait of an American town where racial divisions (while undeniable) are less important than worker solidarity. Globalization and automation, however, are ratcheting up economic strains that are resurrecting old resentments.

When Cynthia applies for a management position at the factory, Tracey becomes uneasy. Cynthia, like her son, is more ambitious than Tracey and Jason, who are content to work on the factory floor until retirement. Job security, however, is something no one can count on any longer.

The blame game is underway, pitting friend against friend as scapegoats (affirmative action, immigration) are found to deal with a system that has come to treat workers as drags on a ledger sheet. One of the targets of Tracey’s ire is Oscar (Peter Mendoza), a Colombian American barback who wants a better paying factory job and is willing to work for less than union wages.

“Sweat,” which had its world premiere at the Oregon Shakespeare Festival in 2015, shows how difficult it is to separate economics and race in an America in which the middle class is becoming a dwindling reality. Nottage, who did extensive on-the-ground research for the play, humanizes the discussion that has only become more vitriolic since Donald Trump was elected president.

“Sweat” is not without dramatic weaknesses. Characters are burdened by explanatory speeches that have a reporting ring to them. The tempo is sluggish at times, and the writing occasionally strikes an earnest note. The script reads better than it plays. When violence erupts near the end, the effect is bracing. The audience is jolted out of the lull of so much talk.

The actors are solid but not often much more than that. Portia leavens Cynthia’s righteous command with touching sympathy. Mara makes the most of Tracey’s savage wit, but she could use more modulation in her brawling abrasiveness. Hochman’s Jason and Coleman’s Chris capture both the palling around humor and growing distance between their characters.

The strength of the ensemble is its unity. Peterson’s production brings to life the expansive canvas Nottage has pain-stakingly created. This is a dramatic world actors and audience members can comfortably live inside.

When I reviewed “Sweat” at the Public Theater in November 2016 before it moved to Broadway the following year, the play seemed to analytically grasp what too many political pundits had missed: the seething anger that turned a reliable blue state such as Pennsylvania red.

The topicality of the drama sadly hasn’t diminished. Economic fears and rising inequality are still polarizing Americans. In its lucid examination of how these divisions have activated other fault lines, “Sweat” offers the healing balm of a probing and compassionate playwriting intelligence. 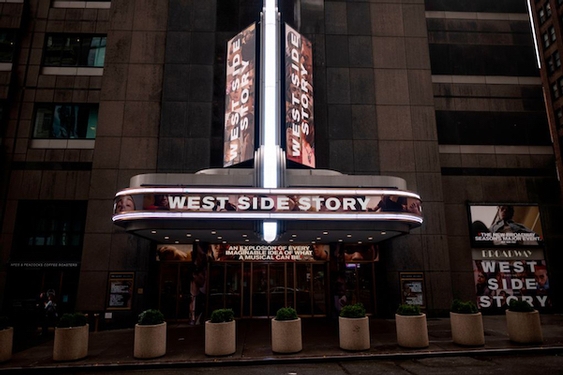 Review
‘West Side Story’ blasts back to Broadway — kinetic, bloody and modern to the core
2,144 views