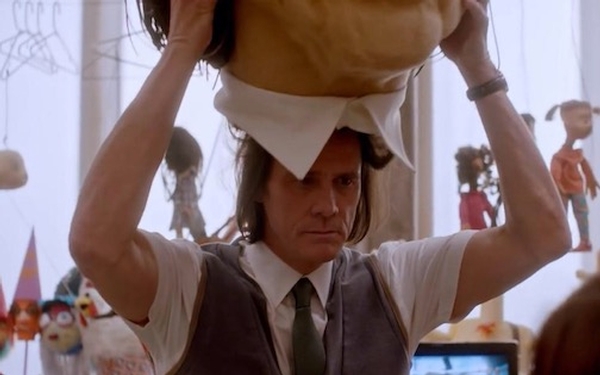 Once upon a time in a smaller, more innocent TV landscape far, far away, colorful and warm adult personalities appeared in the living rooms of kids all around the country, offering up fun and games while also providing wisdom and guidance on how to get along with others and obey their parents.

With the help of sidekicks, puppets and bright surroundings, a roster that included Captain Kangaroo, Mister Rogers, Shari Lewis, Bozo the Clown and a long line of Romper Room hosts broke through the fourth wall, addressing their young viewers as if they were in the same room.

During their shows, Rogers, Lewis and the rest never betrayed any sign of personal problems or angst. But what would have happened if one of them had been overwhelmed by a personal tragedy or started spiraling out of control? What would the kids have seen if Mister Rogers had just lost it?

That intriguing idea is at the core of “Kidding,” Showtime’s new series that premiered Sunday and stars Jim Carrey as Jeff Piccirillo, aka Jeff Pickles, aka Mr. Pickles. Though his marriage and his sanity are unraveling after the loss of a child, Jeff is propelling forward with a determined positivity, trying to make the best of an unspeakably heartbreaking situation. His bosses, meanwhile, are focused on making sure Mr. Pickles’ multimillion-dollar merchandising empire isn’t negatively affected by the tragedy.

The series was created by Dave Holstein, who was a writer-producer on Showtime’s “Weeds.” Holstein said the driving dynamic of the show, in addition to humor, is emotion.

“We wanted to have a show with a real emotional event, and show that optimism is a lot better than cynicism,” he said by phone. “It’s very subversive in the cable universe, showing a character who is trying to stay good in the middle of a dark world.”

“Jeff knows more than anyone else that he is going to get through, even though everyone else is saying he’s off the rails,” Carrey explained in a recent interview at a Beverly Hills hotel. “Healing is happening. He’s down on his knees screaming. That’s a start. That’s the feeling of authenticity.”

It’s the first series regular role for Carrey after his breakout more than 20 years ago in Fox’s groundbreaking sketch comedy show “In Living Color,” which led to a wildly successful film career that included blockbusters such as “The Mask,” “Dumb and Dumber” and two films featuring wacky detective Ace Ventura.

Michel Gondry, the visionary director of 2004’s “Eternal Sunshine of the Spotless Mind,” which starred Carrey and Kate Winslett, directed several episodes of the series and is also an executive producer. The flashy cast includes Frank Langella (“The Americans”), Catherine Keener (“Get Out”) and Judy Greer (“Jurassic World”).

Gondry said in an email that his main objective in approaching the delicate material was to “take Jim Carrey and Jeff Pickles from the pages, and bring Jim towards Mr. Pickles and Mr. Pickles towards Jim so they can meet in the middle, so they would become one person. Then when this person took life, thanks to the talent of Jim and Dave Holstein, I could place him into all the situations, and emotions of the story.”

The series arrives on the heels of “Won’t You Be My Neighbor?” an insightful documentary about Fred Rogers, a.k.a. Mister Rogers, the late host of public television’s “Mister Rogers’ Neighborhood.” The film, which was a box-office success, dove behind the facade of the man who always greeted his wee viewers with a warm smile and the inviting song “Won’t You Be My Neighbor?”

Mister Rogers was a key inspiration behind the show, said Holstein, who began writing a script after wrapping “Weeds” in 2012.

“I was fascinated by these clips of Mister Rogers on TV and how he never broke character,” Holstein said. “I started thinking about it, thinking about how the guy never got angry. I wondered what would happen if he did? What would it take to break him?”

Holstein said he wrote the Mr. Pickles character with Carrey in mind.

“No other actor could have played this role,” he said. “I really couldn’t think of anyone else. Jim brings a nostalgia with him. In the ‘90s, he represented joy and humor.”

As for Carrey, “Kidding” has come along at a time in his life when he has achieved an inner serenity following some years that included some personal upheavals. With the exception of being an executive producer on Showtime’s stand-up comedy series, “I’m Dying Up Here,” he has mostly appeared in smaller-scale projects and has kept a low profile, both on-and off-screen.

Now he says he is filled with energy and focus.

“Creativity is spilling out all over,” he declared.

He’s drawing political cartoons fueled by his strong hostility toward the Trump administration. He’s writing a book. He’s also an Emmy nominee for his work in the documentary “Jim & Andy: The Great Beyond,” which documents his all-consuming performance as comedian Andy Kaufman in the 1999 biopic “Man on the Moon.”

And he’s particularly excited by “Kidding” — he’s one of the executive producers. Reuniting with Gondry was an extra bonus.

“Kidding” is actually two shows in one. One show depicts the children’s show hosted by Mr. Pickles, a program so enchanting that even movie tough guy Danny Trejo melts in his presence. The other show revolves around Jeff’s solitary lifestyle and awkward attempts to connect with his estranged wife, Jill (Greer), and surviving son, Will (Cole Allen).

Despite the darkness of some of the themes in “Kidding,” Greer said she found the series uplifting.

“When I first read the pilot, I thought it was really beautiful,” she said by phone. “I had never seen anything like it. The way that Jeff Pickles is still capable of finding love and beauty in spite of the horrific situation we find him in, I just found that really positive.”

Asked what he hopes audiences get from “Kidding,” Gondry said he hopes they will become engaged by Jeff’s attempts to rebuild his life and connect to the world.

“I want them to follow Jeff Pickles and constantly be torn if he’s right or if he’s wrong,” he said.