What US travelers need to know before traveling to Cuba 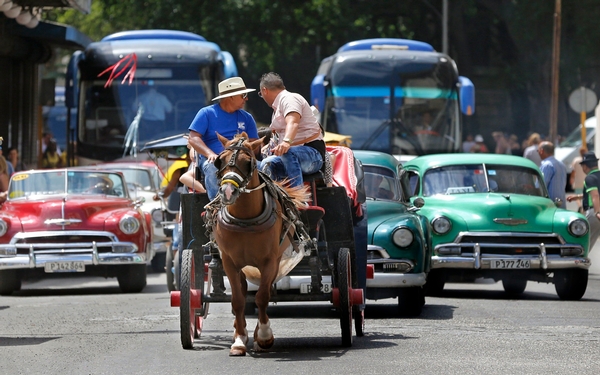 Travel to Cuba can be confusing, especially in light of U.S. travel restrictions and advisories that often make people think twice about visiting the island. But a new U.S. travel advisory should at least help alleviate some concerns about safety.

Recently the State Department softened the travel advisory on Cuba from a Level 3 (reconsider travel) to a Level 2 (exercise caution) and also resumed routine services for American citizens at the U.S. Embassy in Havana.

The combination of the travel warnings, new regulations on travel to Cuba released last November by the Trump administration, and travelers worried after Hurricane Irma slammed the island last September have all combined to take a toll on U.S. visits to the island. Travel by Americans, excluding the Cuban diaspora who are counted separately, fell by more than 23 percent in the first six months of 2018.

Here’s a reminder of the U.S. regulations that Americans need to know before heading to the island:

— Americans may no longer carry out direct transactions with 180 companies, including 83 hotels, that are controlled by Cuba’s military. No American citizen, firm, green-card holder or person otherwise under U.S. jurisdiction is allowed to carry out any direct financial transaction with any entity on the list.

Many of the hotels on the list are in the cays off Cuba’s north coast and are resorts that Americans generally don’t frequent anyway because the United States bars trips whose only purpose is tourism.

What might impact travelers more is that many hotels and some stores in the historic Old Havana neighborhood are on the prohibited list. That’s a point of controversy with the Cubans.

Although the Old Havana hotels under the Habaguanex tourism brand were absorbed by GAESA, a military conglomerate, in 2016, nine heritage stores on the State Department’s prohibited list remained with the Office of the Historian, according to Cuban officials.

Now the Cubans have changed the names of some of the stores, which sell everything from dolls to painted fans, and they’re no longer branded as Habaguanex shops but rather Tiendas del Patrimonio (Heritage Stores).

The State Department emphasizes the restricted list will be updated, but it hasn’t revamped it since last November. Still, every time you plan to travel to Cuba, you should check the list in advance.

Also on the list as are Coral Negro jewelry stores, which are often located in hotels; Manzana de Gomez, the only really fancy shopping mall in Havana, and La Maison, which holds fashion shows and sells clothing, jewelry and accessories.

Bring plenty of batteries and other supplies for your camera because all PhotoService shops fall under the Gaviota umbrella and are on the restricted list.

Some Gaviota hotels, such as the Ambos Mundos where Ernest Hemingway stayed when he was in Havana, are on the prohibited list but not all of them are. Again, check the list.

U.S. travelers also may not book any excursions through Gaviota Tours or the Crucero del Sol agency.

Caney and Varadero rums, as well as several brands of soft drinks, are also on the restricted list, but the U.S. Department of the Treasury, which enforces economic sanctions, has clarified that if you buy these beverages from a third party — a street vendor or at a bar, for example — that’s fine. What is prohibited is purchasing these brands directly from the manufacturer.

— Cuba has said it will welcome U.S. boaters, including Cuban Americans, at Marina Hemingway just outside Havana and at Marina Gaviota Varadero. But the Varadero marina is on the restricted list as are Gaviota marinas in Cabo de San Antonio, Cayo Coco, Cayos de Villa Clara, and Puerto de Vita marina in Holguin.

— The regulations don’t affect travel by Cuban Americans, though they also are barred from direct financial transactions with entities on the restricted list. They can still travel to the island as they did under Obama administration rules. Cuba, however, has changed a few of its own rules, including no longer requiring a habilitacion (qualification) stamp for Cuban Americans traveling to the island with Cuban passports.

— The regulations no longer allow individual travel to Cuba under the people-to-people category. Now those who want to travel under this category, which is designed to encourage meaningful contacts between Cubans and Americans, must be part of an organized group and a representative from the organizer must accompany them.

Those traveling to take part in non-academic educational trips also must travel in groups and be accompanied by a representative of the sponsoring organization.

— Individuals can still travel to Cuba but they must qualify under other categories of U.S.-permitted travel such as travel for religious or humanitarian purposes, travel by journalists or family visits.

The new rules also tweak a category of travel called “support for the Cuban people.” Individual travel is allowed in this category. But such travelers “must maintain a full-time schedule of education exchange activities intended to enhance contact with the Cuban people, support civil society in Cuba or promote the Cuban people’s independence from Cuban authorities, and that will result in meaningful interaction between the traveler and individuals in Cuba.”

What’s that mean for the average traveler?

Staying at a private bed and breakfast, eating at private restaurants and buying goods and services from those who are self-employed are all activities that count as “support for the Cuban people.” But the regulations require something more, such as helping with a civil society program or having a series of conversations with private entrepreneurs, according to the U.S. government.

Those traveling under this category are required to maintain full-time itineraries so one exchange with a private entrepreneur broken up by hours at a hotel pool wouldn’t qualify. “What I tell people is you don’t have to cancel your plans, but you need to build an itinerary so you’re not a recluse and you’re out engaging with Cubans,” said Giancarlo Sopo, founder of the CubaOne Foundation, a Miami-based nonprofit that organizes free trips to the island for young Cuban Americans.

After Hurricane Irma hit Cuba, CubaOne organized a humanitarian trip where travelers worked with local churches to distribute hurricane aid, and it has put together other themed trips since then. All the trips qualify under support for the Cuban people, Sopo said.

People traveling under the support for the Cuban people categories can travel using tourist visas and they can get them at the airport or from travel providers.

— Travelers also are supposed to keep records of their travels and qualifying activities for five years, and have them available if questions arise. For those traveling with groups, the organizer is tasked with keeping such records.

For anyone who needs a recap on the history of the travel advisories, the United States first put U.S. travelers to Cuba on heightened alert last September after diplomats at the American Embassy in Havana were stricken with mysterious symptoms ranging from hearing loss, headaches and memory problems to mild concussions, ringing in the ears and sleep disorders.

The onset of symptoms was sometimes accompanied by a high-pitched sound, leading some to speculate that the health problems might be some kind of acoustic attack. But no cause or culprit for the incidents, which affected the health of 26 American diplomatic personnel in Cuba, has yet been identified.

The State Department said it downgraded the advisory because the “health attacks” appear to target U.S. government personnel and have been reported primarily in diplomats’ residences, but it still advises travelers to avoid two Havana hotels, the Nacional and Capri, where incidents occurred.

Only one room at the Nacional, on the top-floor protocol level, and two rooms at the Capri were reportedly affected. The Cuban government says they are safe and is renting them to guests.

The same day the State Department downgraded its travel advisory to Level 2, it also announced that the Havana embassy was resuming a full range of services for American citizens. That includes passport renewals, first-time passport applications, notary services, authentication services, consular reports of birth aboard and emergency assistance to U.S. citizens.

After the United States announced it was withdrawing two-thirds of its diplomatic staff in the wake of the health incidents, the embassy had only been attending to emergency cases involving Americans.

(Portions of this article first appeared in November 2017 when the Trump administration announced new regulations for travel to Cuba.)