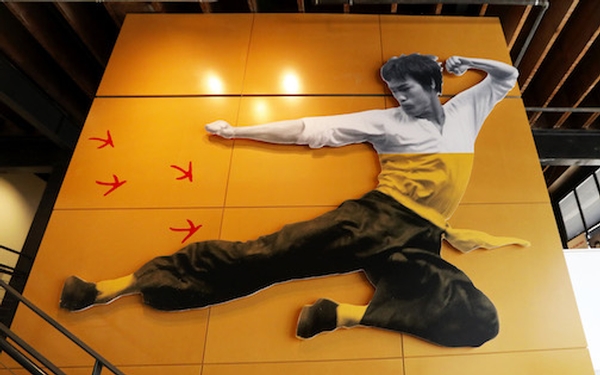 Bruce Lee was able to elevate 8 feet from a standing position. This depiction is on the stairs to the second floor of the Wing Luke Museum. (Alan Berner/The Seattle Times/TNS)

Seeing Seattle’s Chinatown through the lens of the martial artist reveals the community’s rich living history.

Don Wong knew Bruce Lee. As young men, they worked at Ruby Chow’s restaurant together. When Wong, leading the Wing Luke Museum’s “Bruce Lee’s Chinatown Tour” describes his connection with the martial-arts star, it’s not the brag you might expect. He speaks with a touch of sadness as he reminisces about attending the judo classes Lee held at the restaurant after hours.

Wing Luke, where the tour starts, is bustling with 140 students on a field trip. But there are just three of us here for the Wednesday tour — Diana and Judd, a couple visiting from Arizona, and me.

The tour has only been hosted by the museum for the past few years. Before that, it was part of Chinatown Discovery Tours, run by Wong’s sister and her husband. They donated it to the museum in 2014, the same year the museum partnered with the Bruce Lee Foundation to launch the Do You Know Bruce? exhibition series, the only Bruce Lee-focused exhibit outside of Hong Kong.

We start the tour in a small room on the second floor of the museum, where photos of Bruce Lee, his family, Ruby Chow, and the family friends who hosted Lee in Seattle are grouped on the walls. Wong speaks easily and knowledgeably without sounding the least bit rehearsed. He makes casual conversation between stops at one of Lee’s former studios and Tsue Chong Company, the 101 year-old Seattle company that makes and distributes Rose Brand noodles and fortune cookies.

Wong’s a well-known and welcome face around the Chinatown community. When Diana, who wonders aloud about a pastry which she only knows as paw be (actually lao po beng), translating roughly to “honey cake” or “sweetheart cake,” and which she can’t find back home in Arizona, Wong stops in at Tsue Chong and talks with his friend behind the counter about where they might find one. We make some stops at different family-association buildings, where Wong explains the history of family groups and the first arrival of Chinese families to the area.

Before long we’re hunting along Weller Street for a bakery, where Wong finds the lao po beng for Diana. The baker here has them labeled as “Winter Melon Cake.” Diana orders three to take home to her parents, folding the bag securely and carrying them like something precious for the rest of the tour. We take a brisk walk through Uwajimaya, where Wong shows us the famous love-it-or-find-it-absolutely-disgusting durian fruit, followed by a brief stop at the Chinatown Gate. Toeing the blurred borders between the Japanese and Chinese communities, Wong guides us to Higo’s, a store in the Nihonmachi community previously run by one of the few Japanese families to return from internment and reclaim their property.

Diana and Judd begin conferring with each other as Wong leads us to Tai Tung, one of the oldest continuously running restaurants in Seattle and a Bruce Lee haunt, according to Wong. A work conference calls the couple away, so Wong and I find ourselves one-on-one over a spread of fried chicken, Napa cabbage soup, broccoli and Bruce Lee’s two favorite dishes: beef with oyster sauce, and black beans and prawns in garlic sauce.

Over lunch, it becomes clear that Wong’s knowledge of the city extends far beyond Chinatown. He tells me about the many transformations Seattle has gone through, and the changes to come, and the places where people find home and comfort among these changes — places like Chinatown, where many older, first-generation Chinese residents choose to live because it reminds them of home.

After lunch, our waitress, with whom Wong shares a comfortable rapport, packs up the leftovers, and after a stop at the Tai Tung memorial booth, where Lee used to eat his beef with oyster sauce, we head back to Wing Luke, where Wong offers me a hongbao, or red envelope, which contains a little treat, and suggests I take the time to visit the Bruce Lee exhibit once the last group of students has made their rowdy way through.

This has been one of my first tours in the city, and I feel that it’s already my favorite. The tour offers more than just factoids about Lee — you get an immersive look into the Chinatown of his life. And Wong’s personal connection to Lee offers an understanding of Lee the man, rather than just Lee the martial-arts star. But most important, Lee’s story, as told through the streets of the International District, is a gateway to the living history that makes and has made Seattle’s Chinatown such a strong community.