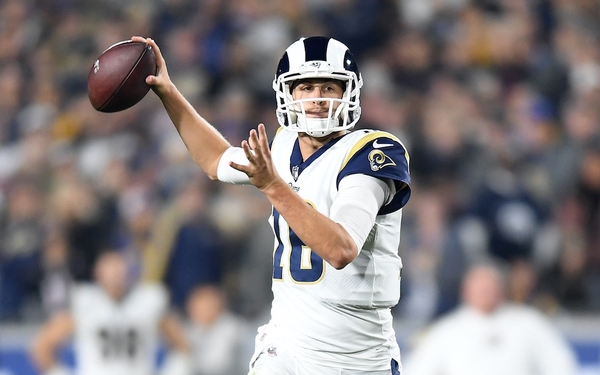 The third-year pro, in a white short-sleeve shirt, blue tights and Rams cap covered by headphones, rolled to his right and launched long passes into the corner of the end zone, where backup quarterback Sean Mannion made tip-toe catches.

No preseason snaps? No problem.

That was at the attitude coach Sean McVay and Goff adopted after McVay decided to not play Goff — or any starters on offense — during four preseason games. The decision might not start a new NFL trend but it worked for the Rams. A physically sound Goff passed for two touchdowns as the Rams ruined Jon Gruden’s return to coaching with a 33-13 victory at Oakland-Alameda Coliseum.

It wasn’t recent vintage 2017 Goff, who blossomed under McVay’s tutelage and led the Rams to a division title and earned a Pro Bowl appearance. But other than a strip-sack fumble that was recovered by the Rams, Goff did not commit a major error as the Rams began what some are projecting as a Super Bowl run.

Still, Goff made it clear his team can do better.

“Any first game of the year you’re dealing with some of that,” he said. “I think you saw it around the league. No different for us. The first drive or two you can kind of get those jitters out and move on.”

Goff completed 18 of 33 passes for 233 yards, incorporating new receiver Brandin Cooks into the mix with Robert Woods, Cooper Kupp and running back Todd Gurley, the reigning offensive player of the year.

Gurley rushed for 108 yards in 20 carries and caught three passes, including a shovel pass that he turned into a 19-yard touchdown. Greg Zuerlein’s four field goals also helped the Rams to a victory that gives them momentum heading into next week’s home opener against the Arizona Cardinals.

But all eyes were on Goff, the focal point of a franchise that spent lavishly during the offseason to build a winner for this season and beyond.

The first pick in the 2106 draft is the triggerman for an offense that averaged a league-leading 29.9 points last season. Nearly the entire unit returned, except for receiver Sammy Watkins, who was replaced with what McVay regarded as an upgrade in Cooks.

Goff, 23, had said all would be “fine” without preseason snaps because he practices daily against one of the NFL’s most talented defenses.

However, some former NFL quarterbacks — including 2002 MVP Rich Gannon and Vince Ferragamo — said practice speed could not simulate game speed. Gruden joked that he hoped the strategy “has a terrible impact on him.”

Goff, who grew up in the Bay Area and played in college at nearby California, might not have been completely sharp, but he was good enough after starting slowly.

His first pass, on the third down, was intended for Cooks. But cornerback Rashaan Melvin broke it up.

On the next series, Kupp dropped a pass. But Goff went right back to the second-year pro for his first completion and a first down. He followed with a 21-yard strike to Woods.

His first touchdown pass came when McVay put Gurley in motion from left to right, and Goff pitched the ball forward to him. Gurley scampered around right end for a touchdown that tied the score, 7-7.

Goff made other good passes to Woods and Kupp, but the longest gains on pass plays came on pass-interference penalties against Raiders cornerbacks trying to keep up with Cooks on deep routes.

The Rams trailed 13-10 at halftime, but Goff brought the Rams back with passes to Cooks and Woods on the first series of the second half. Goff missed on a third-down pass to Kupp in the end zone, forcing the Rams to settle for a field goal.

But Goff came alive late in the third quarter, connecting with Cooks for 17 and then 30 yards before finding second-year pro Kupp for an eight-yard touchdown pass that put the Rams ahead, 20-13.

“He continues to just take leaps and bounds …,” left tackle Andrew Whitworth said of Goff, “and then to see him go out and be successful, and really just throw a lot of balls that were inches from really having an explosive day.

“Almost a near perfect day.”