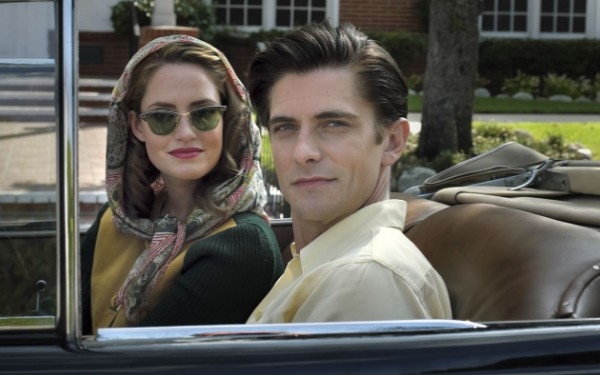 As the opening credits take us through the news clippings of Louis Zamperini’s traumatic and astonishing war experience--what some of us may have learned from Angelina Jolie’s unaffiliated prequel Unbroken from 2014--it becomes quickly apparent that Unbroken: Path to Redemption is going to be of a different ilk. We know this for a couple of reasons: the poor and unnecessary photoshopping job done of actor Samuel Hunt’s face onto actual pictures Zamperini, as well as the sweeping score that suggests an overdone melodrama rather than that of a harrowing tale of redemption. Of course, Zamperini did live very different lives before, during, and after the war, but unfortunately, director Harold Cronk doesn’t deliver his third act with any sincerity, but instead with a Hollywood gloss that we’ve seen all too much.

For those who aren’t familiar with Zamperini’s extraordinary life story, detailed in Laura Hillenbrand’s novel Unbroken, it’s worth quickly recapping. From a young age, Zamperini was in the spotlight. He held the world interscholastic record for the one-mile race for years in high school, and eventually went on to run in the 1938 Berlin Olympics where he didn’t win, but did well enough to receive a handshake from Adolf Hitler. He then enlisted in the war in 1941 as a bombardier, and during a mission his plane crashed in Japanese waters. The three men who survived the crash lived off raw fish, albatross, and salt water for weeks, all the while fighting off shark attacks and avoiding Japanese bullets. By the 47th day, Zamperini and just one other camrade were alive when they were captured by Japanese forces and taken to a prison camp where they were tortured until the end of the war.

This is where Jolie’s movie ended and Cronk’s movie begins--the homecoming of the thought-lost Zamperini. The charming Samuel Hunt plays the soldier who comes home to a world that can’t get enough of his unimaginable story of survival. While the press hounds him to relive the tale, his dreams similarly don’t give him peace. The trauma of the sea, the prison, and most notably one guard nicknamed “The Bird” haunts him and drives him to drink recklessly.

That’s when he meets Cynthia Applewhite, played by Merritt Patterson, a beautiful Christian girl who doesn’t make big news of Louis’ heroism, but instead values the real goodness in him. A whirlwind love affair later, and they decide to get married. She encourages him to train for the London Olympics, to get back on the track where he could focus on success once again. While he says yes, and the training montages commence, it doesn’t keep Louis from the bottle.

Hunt is a big departure from Jack O’Connell who starred as Zamperini in the first Unbroken, and while Hunt looks the chiseled Hollywood part, O’Connell brought an extraordinary amount of grip and torment to his character. Hunt, on the other hand, doesn’t convey the kind of pain that the role calls for. The post-war Zamperini is a haunted man, ceaselessly overrun by the ghosts of his past, and Hunt doesn’t manage to rise to the occasion.

Screenwriters Ken Hixon (City by the Sea) and Richard Friedbenberg (A River Runs Through It) stage Louis and Cynthia’s blossoming romance in predictable and conventional terms that leaves more to be desired, especially as it is the heart of this phase of Louis’ life--before he turns to Christianity that is. Their initial meet-cute has enough cuteness, but not enough originality that makes you believe in their unwavering affection for each other.

The clunky dialogue in pivotal moments caters to a slow-moving narrative that’s hard to keep interest in, even as Louis’ situation worsens. The alcoholism is at its highest, he’s becoming an abusive husband, and yet Cronk and his team can’t seem to bring together the drama in a cohesive way. By the middle of the third act, when Cynthia takes Louis to a crusade of celebrity evangelist Billy Graham, and he suddenly becomes born again, it’s easy to not feel an impact by it. It even seems dismissive and rushed despite the fact that he found the path to saving his life and his family.

When all is said and done, Unbroken: Path to Redemption is a film about finding grace and isn’t too concerned with precision or structure. Cronk delivers a cookie-cutter film that fits many genre tropes and doesn’t attempt to step out of line, which it unfortunately suffers for. While many evangelists will be happy that the story of Zamperini’s time with Billy Graham will finally be told, it may not affect other viewers similarly.