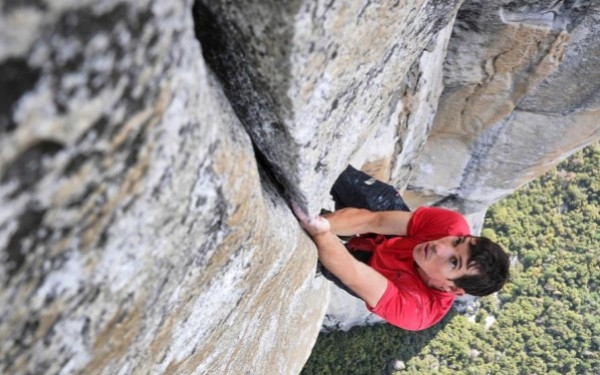 If you’re one of the 4 million people who visited Yosemite last year, you probably did a lot of craning your neck, blocking your eyes from the Northern California sun with some drawn out version of “whoa” falling out of your gaping mouth. Half Dome, Yosemite Falls, Tuolumne Meadows--this National Park is known for its incomparable vistas and landscapes. On June 3, 2017, however, there was something, or rather someone at work who would challenge the natural beauty by conquering the unthinkable. Alex Honnold, world-class rock climber, would ascend El Capitan, an immodest 3,200-foot rockface without ropes, without nets, without any means of support if he were to slip and fall. Free Solo, an outstanding and nail-biting documentary from directors Jimmy Chin and Chai Vasarhelyi, follows Honnold as he faces the rock, the humanity, and the focus that it takes to do the unimaginable. And he actually does it.

That’s not any kind of spoiler, mind you. Honnold has been hounded by the press after the feat, describing what it was like to reach the top of El Cap in just under four hours and how crazy he must be to even have wanted to do so. But the power of Free Solo lies in its unfathomable scope--that no matter how much reassurance there is in knowing he succeeds, your brain simply cannot compute the fact that he did. Each minute of Free Solo, even as he inches toward the crest of the mountain, is its own thrillride.

Directors Chin and Vasarhelyi are to thank for this. Having directed the critical rock-climbing hit Meru back in 2016, they are no strangers to the physical, emotional, and ethical hardships that come with documenting a colleague and friend attempting a life-threatening feat. An extreme sports nut himself, Chin has filmed some of the gnarliest of nature’s hurdles. Vasarhelyi, on the other hand, is married to a climber and knows what it’s like to send a loved one out to battle the elements. In other words, they were made to make this film.

In Free Solo, not only do we get to see Alex face the pressures and doubts of his own ability, but the doc also shows the crew members discussing with Alex the role of the camera on his climb. Does the fact that there is a camera on the mountain with him put more pressure on him to make a foolhardy decision? Is it ethical to film their friend fall to his death, knowing that it was a likelihood? The meta analysis of the filmmaking process adds an unexpected and welcome richness to Alex’s journey.

Alex’s journey, after all, is what Free Solo is really there to capture, and the filmmakers wanted to make sure their presence didn’t hinder his own experience. Before the 32-year-old even begins taking meticulous practice runs on El Cap, we follow Alex trying to explain to family, students, and press why he does what he does. He’s free soloed many of the America’s most famous natural monuments, including Moonlight Buttress in Zion National Park, so why does he keep wanting to raise the bar? Can you blame a girlfriend for breaking up with you when she knows risking your life is your career? Just like the act itself, the explanations Alex gives are also hard to wrap your head around, but Free Solo shows that he is simply one of a kind. And also that his brain is literally hard-wired to not feel fear on the same level that most of us do.

Alex’s personal life is integrated throughout the process of his ascension training as he starts dating a beginning climber Sanni McCandless. For someone who is so detached from fear and the concept of loss, it’s fascinating to watch the pair try to navigate those murky waters. It’s a little frustrating to watch her try to convince him to not do the thing he’s been dreaming of for years, especially since she knew what she was signing up for, but then you remember what he’s trying to do and then the sympathy cuts right back in.

Oh, and then there’s the beauty. Remember those incomparable vistas and landscapes I was talking about? Well, Chin and Vasarhelyi make sure to do it justice, and boy do they deliver. It’s true that it's hard to make Yosemite look bad, but their cameras are so precisely placed throughout Alex’s climb that it makes you want to cover your eyes and never look away at the same time. The camera rigs and motion triggers allow us to see views that only Alex saw on his ascent, and that is a truly remarkable feat in filmmaking. For anyone with even a small bit of acrophobia, Free Solo might be a tough one to swallow, but for those of you who want to see one of the greatest human accomplishments in one of nature’s greatest gifts to this planet, then stop wasting time and see the view for yourself.