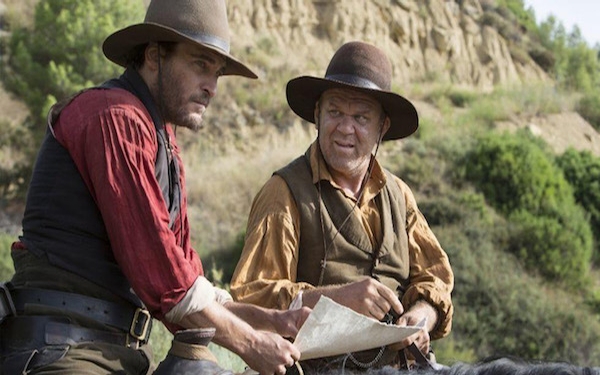 Killers for hire Charlie Sisters (Joaquin Phoenix, left) and Eli Sisters (John C. Reilly) follow a strange trail into the black heart of the gold rush in "The Sisters Brothers."

Much of the action in “The Sisters Brothers,” a funny, stirring, brutal story about four men searching for gold and deliverance in the Old West, is set in motion by an invention — a chemical solution — that might be every prospector’s dream.

At one point we get to see it in action: It’s poured into a riverbed that suddenly glows bright blue, revealing its precious bounty like a shimmering mirage. For these men, the enticement of riches lasts for just a few moments; the bloody consequences that await some of them will last an eternity by comparison.

The steep price of greed is hardly a new theme in the countless books and movies set against an open, hostile American frontier. But one of the pleasures of “The Sisters Brothers,” adapted from a 2011 novel by Canadian writer Patrick deWitt, is its willingness to meander, to zig and zag en route to what might seem like an obvious destination.

Where it arrives may not strike you as especially fresh territory, but the journey is strange enough to make you question what kind of movie you’re watching. Is this a western or a comedy? A grim morality tale or a shambling picaresque?

The answer is all of the above, and also a love story of surprising sincerity and tenderness — perhaps even a few love stories. You wouldn’t necessarily guess this from all the bickering and grumbling that transpires between Eli Sisters (John C. Reilly) and his younger brother, Charlie Sisters (Joaquin Phoenix), who work for a very bad man known only as the Commodore (Rutger Hauer in a brief, wordless turn).

While in the Commodore’s employ, the Sisters brothers have earned themselves a certain slovenly notoriety: They may be clumsy and unreliable, but even their enemies would have to agree that they’re really, really good at killing people.

The French director Jacques Audiard (“A Prophet,” “Rust and Bone”) doesn’t waste time belaboring the brothers’ back story or burnishing their dubious legend. This is his first production with an English-language screenplay and U.S. movie stars, but given his mastery of genre — to say nothing of France’s long-running love affair with the mythology of the American West — it’s less of a departure than you might think.

The screenplay, which Audiard adapted with his longtime collaborator Thomas Bidegain, has a loose, shambling structure and moves to its own poky rhythms. But it is also a marvel of narrative concision, distilling years of personal history into terse lines of dialogue and revealing character through spurts of tense, pared-down action.

The movie drops us right in, starting with a nighttime raid on a house somewhere in Oregon in 1851. It hardly matters who gets killed and why: For Charlie and Eli, it’s just one more job, one more addition to the long trail of bloody bodies they’ve left behind them. You can bet the trail will be longer before their journey has ended.

Much of that will be due to Charlie, the younger, angrier, more volatile of the two brothers, whose itchy trigger finger is scarcely improved by his frequent bouts of drunkenness. We will eventually learn the reason he’s so far gone, but Phoenix, no stranger to wild-man roles, gives him the sort of scary live-wire presence that renders psychology superfluous.

Always there to help pick him up again is the older, wiser, more trustworthy Eli, who’s perpetually exasperated with Charlie in a way that only a truly devoted brother could be. Reilly gives a performance of rich, understated soulfulness, but he also has a mug worthy of a great silent comedian. In one hilarious recurring bit, Eli teaches himself to use a toothbrush, a fairly new if extremely necessary commodity in the Old West. It’s a terrific gag, but it’s also something more; you can see in it the honest fumblings of someone who hasn’t given up on bettering himself.

Until then, however, there is stealing, torturing and killing to be done. The Commodore has ordered them to track down one Hermann Kermit Warm (Riz Ahmed), a chemist-turned-prospector who devised that much-coveted solution. While looking for a place where he can put his formula to work, Hermann is followed by John Morris (Jake Gyllenhaal), a detective who means to turn him over to Charlie and Eli.

Naturally, none of this goes according to plan: John, a thoughtful, eloquent gentleman with a most inconvenient moral compass, soon abandons his mercenary plot and joins forces with Hermann. It’s only a matter of time, of course, before these two prospectors cross paths and exchange a few bullets with the Sisters brothers. What happens when they do meet, however, is far stranger and more affecting than any of them could have expected.

One of the things that gradually sinks in as you watch “The Sisters Brothers” is just how damn likable everyone in it is, the spirit of optimism that prevails even among men who have suffered more than their fair share of past persecution and abuse. OK, so Charlie’s a wreck, but there’s still hope for him and especially for Eli, who carries a torch for a woman back home and can still bring himself to weep over a dead horse. All he wants is to finish the proverbial one last job and get out of the game for good.

The deep kinship that forms between Hermann and John — it’s a pleasure to see Ahmed and Gyllenhaal reunited after their 2014 thriller, “Nightcrawler” — is predicated on an even higher-minded desire. After striking it rich, they want to establish their own community in Dallas where peaceable, like-minded men can live in accordance with truly democratic principles.

Shot primarily in Spain by the cinematographer Benoît Debie, “The Sisters Brothers” has a sturdy, rough-hewn grandeur that duly salutes the iconography of the western, with its saloons and shootouts and men riding their horses against striking sunset vistas. The few women we meet are memorable enough to make you wish the movie had more time to spare for them: a prostitute (Allison Tolman) who has a sweet, chaste interaction with Eli, a woman (Rebecca Root) who runs a town that becomes one of the brothers’ grislier stopovers.

In the end, Audiard plays to his strengths as a poet of wounded masculinity; in its most touching moments, “The Sisters Brothers” is like a hangout movie on horseback. As in his earlier thrillers including “A Prophet” and “The Beat That My Heart Skipped,” the director brings out a deep, lingering ache in the material, exposing the vulnerability beneath these men’s rawhide-tough surfaces.

The movie’s strongest sequence finds the central quartet working beside a lake, preparing the water for Hermann’s miracle solution. To their surprise they’re enjoying each other’s company, talking and bonding in a way that, you suspect, men of their time and place rarely permitted themselves to do. It’s a lovely reverie, a respite from the harsh reality of their lives and the grim fates that await some of them. For a moment, a movie that started off looking like a rickety joke comes perilously close to breaking your heart.