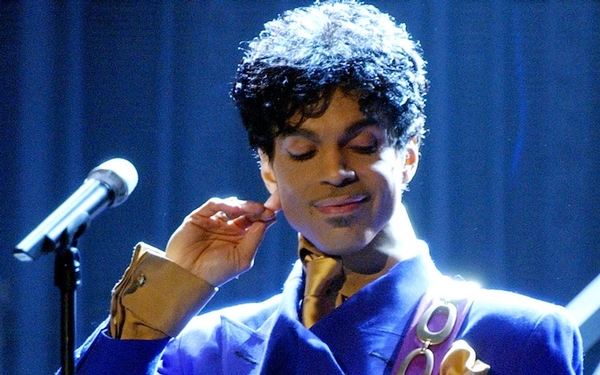 Prince performs "Purple Rain" as the opening act during the 46th Annual Grammy Awards show on Feb. 8, 2004 at the Staples Center in Los Angeles.

The Firesign Theatre comedy troupe once released an album aimed at upending expectations and assumed knowledge. It was titled “Everything You Know Is Wrong.” Such a phrase comes to mind with the arrival of “Piano & a Microphone 1983,” an intimate recording from Prince’s vast archive of unreleased material.

A fitting subtitle could be “Everything You Know About Funk Is Wrong,” thanks to a couple of flat-out stunning solo performances on this session.

This is not the Holy Grail of lost or shelved Prince albums — that presumably would have to involve one of his stellar bands such as the Revolution, the New Power Generation or 3rd-eyegirl, collaborators integral to his most fully realized recordings.

But for the committed fan, this collection of nine tracks clocking in at around 34 minutes opens a window on just how much the Pur-ple One could pack into a song with just 10 fingers and a voice, with periodic rhythmic assists from one or both of his ever-restless feet.

The revelations start with “17 Days,” which previously surfaced in a full-band arrangement released on the 1993 triple disc “The Hits/B-Sides” compilation. The solo version here is an eye-opener.

For nearly 6 1/2 minutes, even without the slippery bass, the throbbing drums or the propulsive rhythm guitar of the full band version, Prince sacrifices none of the infectious dance-ability of that performance. In fact, with the tempo bumped up a few BPMs, it feels more energetic.

The power he pumps into the piano keys is visceral, and he adds scintillating jazz riffing that fuels and propels the song’s basic two-chord structure. It also appears as if he’s still clearly working out the lyrics (“The rain comes down, down, down” is repeated throughout, and punctuated with a vocalese rainbow of syllabic accents and interjections.)

Similarly, “Strange Relationship,” which appeared on his 1987 album “Sign O’ the Times,” is full of sultry rhythmic urgency, thanks to his inventive, syncopated piano accompaniment and every-other-beat foot stomps. It’s another demonstration that Prince could have been a world-class jazz pianist if that had been his prime objective.

Moviegoers who have caught Spike Lee’s “BlacKkKlansman” already have had the opportunity during the film’s closing credits to hear Prince’s exceptional reading of the 19th century gospel song “Mary Don’t You Weep.” It’s a remarkable fusion of gospel, soul and jazz, his liquid falsetto taking the song’s plea for understanding soaring into the musical stratosphere.

The version here of “International Lover,” which had appeared a year earlier on his “1999” album, is freer rhythmically, slowed down and more confessional, veering more into the open-ended expressiveness of jazz than the pulsing R&B treatment of the studio version.

Additionally, a year before “Purple Rain” appeared in finished form as a scorching soul-rock ballad, Prince sat at the piano as if he were in a cabaret in the wee hours that Frank Sinatra always favored.

“Cold Coffee and Cocaine,” one of two previously unreleased songs, takes the performer back to hard jazz funk, with the artist flashing more great piano licks and an unerring rhythmic drive as he riffs on the two titular subjects in which he expresses no interest in having.

The album concludes with “Why the Butterflies,” another song still looking to emerge from its formative cocoon, but already rich with rhythm and romantic yearning in its DNA.

This release from Prince’s estate is tightly focused and doesn’t fall into a “something for everyone” category. But for those who want an unadulterated glimpse into just how brilliant Prince could be all by his lonesome, “Piano & a Microphone 1983” delivers a mighty convincing exhibition.