Hozier is back with new music, and an assist from the legendary Mavis Staples 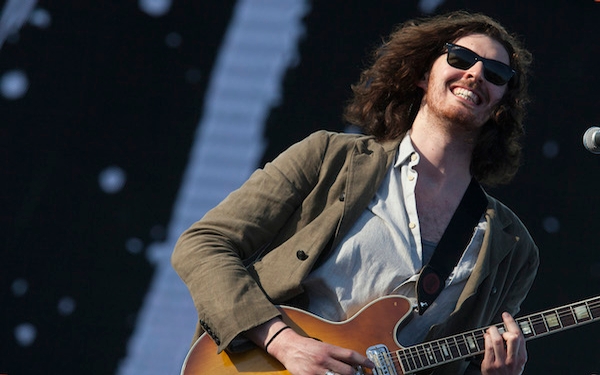 Five years ago, Irish singer-songwriter Andrew Hozier-Byrne, who records as Hozier, landed a huge and unexpected hit with his first single, “Take Me to Church.” He released his self-titled official debut the next year, toured behind it endlessly, and eventually returned to the studio to work on his newly released four-song EP, “Nina Cried Power.”

The title track, referencing a Nina Simone lyric, serves as a tribute to protest artists of the past. It features an assist from Mavis Staples, and its accompanying video pays homage to Irish progressive activists.

The EP serves as a place setter for the singer’s upcoming sophomore full-length, which he estimates is 99 percent finished. In a recent phone interview, Hozier talked about recording with Staples, launching a comeback and why you should never, ever read the comments section.

The following is an edited transcript of that conversation.

Q: The title track of “Nina Cried Power” is an example of a song rising to meet the moment. It’s such an important moment to speak to, but it’s hard to know what to say.

A: Yeah. Difficult times do call for a response from artists. … It’s hard to know where to begin. I suppose that’s kind of the starting point of the song: What can be done? What can be said? My hope for that song was to point to the legacy of people who faced similar adversity during very difficult times, that there’s a precedent there that at least we can look to. There’s a well of bravery, there’s hope to be drawn from that, as a starting place.

Q: You and Mavis Staples look so happy in photos from the recording sessions.

A: It’s very easy to be happy around Mavis Staples. She is one of the warmest, just one of the most incredible people I’ve ever met. She exudes a kind of limitless warmth and enthusiasm and kindness. On top of that, her natural kind of musicality and the way she approaches singing, she’s a legend in my books, and kind of a hero of mine.

Q: It’s an interesting song to return with. Did you ever have a sense that maybe you should do a splashy pop song for your first track back?

A: Yes and no. I have to think like an artist, I can’t think like a label. I wasn’t all that worried. I’d never approached music in a traditional way. The first song I ever released was “Take Me to Church,” and it was so much easier then because I had nothing to lose, I was completely unknown. We released that song initially for free. For this record as a whole, I just wanted to carry on and trust my gut as I had done the first time ‘round … I wasn’t too worried that it had to be kind of flashy or poppy or whatever. It just needed to sound like me.

Q: Did you think, “I have to get something out there. It’s been years”?

A: It is nice to be back, and it does feel like a returning, and there were a few cobwebs to dust off with regard to playing live. But I released the first record and toured that for two years. I only really let go of the touring about two years ago, and the last 12 months of my life have been about preparing all of this work. This EP is really just the tip of the iceberg — there’s a heck of a lot more to come. I did take about a year off to kind of decompress and think about what I wanted to write, and what was worth writing about. But the work had to be right, and that would take as long as it took.

Q: You’ve said in interviews that these new songs have an “abiding sense of doom.” Were you kidding?

A: Kidding but not kidding. It’s there, but there’s a gallows humor to it. It definitely is informed by the end of something, the feeling of standing on the edge of a cultural dark age, (where) more could be lost. Some of them are kind of mournful, and some of them are optimistic.

Q: Do you see it as your job as an artist to not just chronicle the gloom, but to transcend it? Do you have to provide some light?

Q: Is there a contingent of fans who want you to be nonpolitical, to just shut up and sing?

A: No, interestingly enough. That’s a really depressing and tediously predictable line that a lot of people take when they don’t want politics in their sports, or their art, or their entertainment. I’m afraid if it concerns people, it concerns politics … I’ve been pleasantly surprised with how people are responding to it. I’ve never come across that kind of bitter resistance. The comments section of a website is like a toilet wall, you know what I mean?

Q: Are you glad, on a personal level, that you have something new coming out, and you don’t have to talk about “Take Me to Church” anymore?

Interviews
Searching for hope? Kacey Musgraves’ ‘Rainbow’ is a psalm, and balm, for the pandemic era
614 views

Interviews
Billie Eilish isn’t stressing over the Grammys. She’s busy worrying about the end of the world
1,139 views