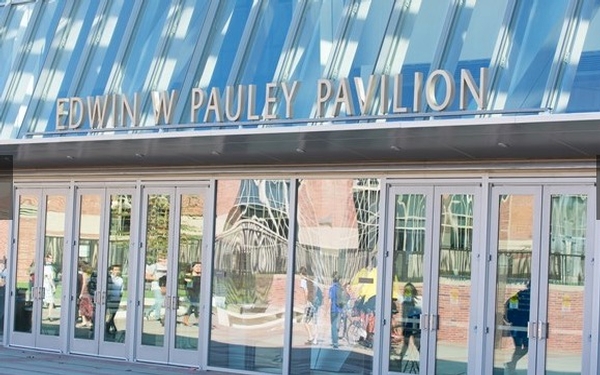 The blue strip of court inside Pauley Pavilion in front of the team benches now features “WESCOM” in white block letters as part of a 10-year, $38 million sponsorship agreement between the credit union and the school that was announced Wednesday. The 53-year-old arena will be known as Edwin W. Pauley Pavilion presented by Wescom.

“What an incredible opportunity,” Darren Williams, president and chief executive of Wescom, said in a telephone interview. “It is truly an iconic facility. We’re thrilled to have our name associated with Pauley Pavilion and glad that doing so will help with the ongoing preservation of the arena.”

An unspecified portion of the sponsorship money will be used for long-term maintenance of the arena, which underwent extensive renovations before the 2012-13 season. Funds will also go toward athletic scholarships, among other uses.

Wescom will become the official banking sponsor of UCLA athletics, campus life and the school’s alumni association as part of the agreement.

The partnership represents the expansion of a relationship between the Pasadena-based credit union and UCLA athletics that started in 2015 with Wescom becoming the official financial institution of the Rose Bowl stadium.

“It’s really going to touch so many areas on campus and campus life,” Williams said, “and that’s what makes it really exciting for us.”

Wescom will provide financial literacy training for UCLA students and five on-campus automatic teller machines in addition to fee-free checking, mobile banking and overdraft fee waivers for those who join the credit union.

An on-campus Wescom branch within the Ackerman student union is slated to open in 2019 and be staffed primarily by students. The student union patio will undergo improvements including expanded seating and shading, and will be renamed the Wescom Dining Terrace.

Wescom will be well represented inside Pauley Pavilion. An informational kiosk for the credit union will be staffed during events and there will be signage on the scoreboard and outside the arena displaying the new arena name.

And those new bank shots over the Wescom logo? The Bruins might want to take them in practice and pregame warmups because they won’t count in games. The logo is on a part of the court that’s out of bounds.