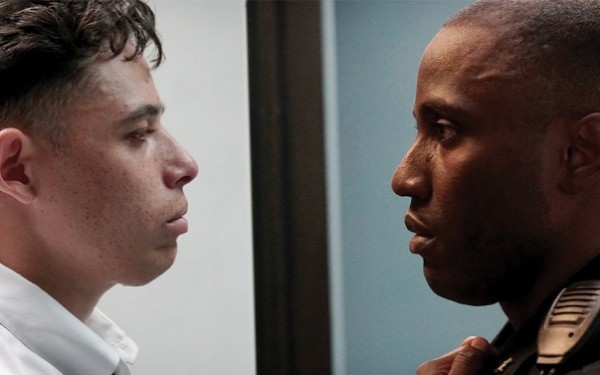 It happens everyday. It happens everywhere. It doesn’t happen to everyone. If you’re a person of color in America who’s trying to live life without getting your face slammed with injustice, well, good luck. That’s how the system works, always has and always will... or so someone somewhere says. In Monsters and Men, the film that won the Outstanding First Feature Award at this years Sundance, writer-director Reinaldo Marcus Green wants to open up the conversation that these seemingly endless tragedies of police brutality have started, but have also ended. Ended out of frustration, maybe, but mostly out of fear of real tangible change. The result is a rich, rounded exploration of one of the most common headlines in our news cycles today. And so, we go to Brooklyn.

The structure of Green’s narrative is an arresting way to tell this kind of story. Instead of focusing on one main character, we get the complex and conflicting viewpoints of three, all from one community and all affected by one tragedy.

We meet Manny (Anthony Ramos, Hamilton), a young father who just wants to get a secure job to support his family, but who witnesses the murder of his friend, Darius Larson, an unarmed black man who resists arrest. Catching the footage on his phone, he grapples with his sense of responsibility. Does he post it to unmask the truth of a black person’s America, putting him in the crosshairs of the police’s intimidation? Or does he keep his head down and hope he’s not next?

Then we meet Dennis (John David Washington, Black KKKlansman), a black police officer who is not only often a victim of racial profiling himself, but is also torn by his loyalty to his force and the safety of his family. He becomes the watcher and the watched of his community in the aftermath of the shooting.

And last, there is Zyric (Kelvin Harrison Jr., It Comes at Night), a high school baseball star gearing up for the showcase that will change his life, but who is ultimately swept up by the politics and protests of Larson’s murder. As someone who has walked the straight and narrow his whole life, chasing his dreams and making his father proud, he is enraged by the unending cycles of violence and the distrust his police have towards him simply because of his color. To the picket lines he goes.

The manner in which Green weaves these characters through and around each other’s paths, but never quite putting them in the same conversation, gives a beat and rhythm to Monsters and Men that is surprisingly not too heavy-handed. The frame of their perspectives is maintained through their personal bubbles, but then we see how that bubble bursts when it gets too close to someone else’s.

With a mixture of natural handheld and graceful steadicam shots, Green and his cinematographer Patrick Scola build a world of high-stakes tension as well as beauty. Each of our highlighted characters come alive with love for their communities and families, and each rise to the challenge of coming close into the camera for the moments of heartbreak and remorse. In other words, spot on casting. I keep on thinking one actor had a greater impact on my experience, but truly each one hits a homerun, for lack of a better metaphor.

You can catch MONSTERS AND MEN in theaters now.