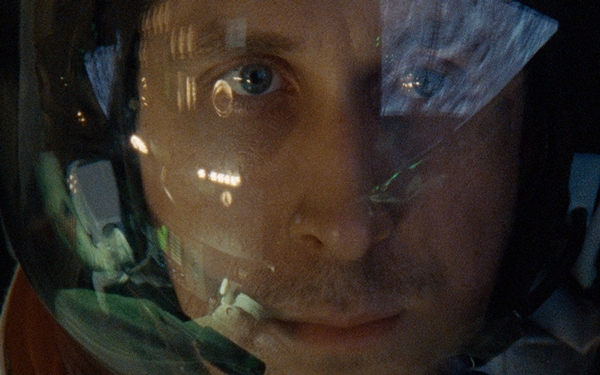 The most captivating sequence in “First Man,” Damien Chazelle’s heart-stirring, nerve-jangling new movie about Neil Armstrong’s voyage to the moon, is in some ways the least surprising. If you were glued to a TV screen on July 20, 1969, you will be watching a truncated version of history replay itself: After the Eagle lands, Armstrong (played by Ryan Gosling) plants one foot on the lunar surface and utters a line that no screenwriter could improve upon. But you will also find yourself transported anew by a scene whose technical ingenuity and emotional force reminded me of nothing so much as Dorothy opening her front door to Oz for the first time.

The door, in this case, is attached to the Apollo 11’s lunar module, and on the other side is not a Technicolor wonderland but rather a vast, monochrome blankness. Planet Earth really does seem to have been left behind, leaving only a dark, airless void, a zone of desolation and wonder. The visuals are majestic — see the movie in Imax if you can — but the most arresting effect might be the sound, which briefly drops out entirely: In space, no one can hear you gasp.

The sheer sublimity of this sequence — the eerie silence, the stillness and clarity of the image — stands in sharp contrast to the rest of the movie, which is framed with almost defiant inelegance. “First Man” is a viscerally, sometimes maddeningly idiosyncratic piece of filmmaking. Adapted from James R. Hansen’s 2012 Armstrong biography, the movie has been shot and structured as a series of ruptures — physical and emotional, individual and collective — that eventually give birth to a rare, serene moment of triumph.

Some in the audience may look back on that triumph and see an inevitability, a logical culmination of manifest destiny. But “First Man,” shunning the temptations of complacency and revisionism, unfolds in a jagged, immediate present tense in which uncertainty is the only certainty.

The early scenes of Armstrong as a young engineer and pilot in 1961, testing fighter planes at stratospheric altitudes, induce a dizzying claustrophobia. The clamorous noise of the engines and the rattling motions of the aircraft remind you of the violent irrationality of human flight. Even back on the ground, the camera, wielded by the cinematographer Linus Sandgren, maintains a persistent case of the jitters, compounded by the willful disorientation of Tom Cross’ editing. The screenplay by Josh Singer (“Spotlight,” “The Post”) compounds the effect in dramatic terms, piecing together a whiplash-inducing narrative of fatal setbacks and sudden breakthroughs.

Amid all this whirling, jolting technique is a quiet center of gravity named Neil Armstrong, whom Gosling invests with taciturn grace and an artfully dimmed version of the movie-star charm that animated his previous collaboration with Chazelle, “La La Land.” Armstrong, who largely retreated from the spotlight after Apollo 11, was famously the least flashy, most self-effacing of American icons, which presents a significant hurdle for any filmmaker trying to illuminate his inner life. Gosling’s performance sensibly emphasizes at least two irrefutable points: He didn’t say much, and he was very, very good at his job.

But “First Man” naturally wants to tell us more than that, to chronicle not just a staggering physical trek but also a deep journey inward. The movie’s challenge, one to which it rises determinedly if not always effectively, is to pare back the outer layers of Armstrong’s privacy without violating it. There’s a brief, solitary shot of him weeping after he and his wife, Janet (a strong Claire Foy), lose their 2-year-old daughter, Karen, to cancer — a loss that affects Neil so deeply, the movie suggests, that his only response can be to appear as outwardly unaffected as possible.

And so he throws himself into his work and moves with Janet and their two sons to Houston, where he enters an astronaut training program for NASA’s new Gemini spacecraft. The warm, respectful camaraderie Neil enjoys with his colleagues — they include his across-the-street neighbor Ed White (Jason Clarke), Gus Grissom (Shea Whigham), Roger Chaffee (Cory Michael Smith), Elliott See (Patrick Fugit), Jim Lovell (Pablo Schreiber) and Dave Scott (Christopher Abbott) — masks a gently understated rivalry within NASA’s ranks. (It’s less understated in the case of Armstrong’s future Apollo 11 partner Buzz Aldrin, played in a delightfully obnoxious turn by Corey Stoll.)

But competitiveness gives way to stiff upper lip sorrow when the mission to the moon exacts a human toll in plane crashes and prelaunch accidents, triggering widespread criticism of the space program. “First Man” deftly elides a decade’s worth of national upheaval, as the space race finds itself caught between the mounting anxieties of the Cold War and the angry resistance of a public preoccupied with Vietnam and the civil rights movement. We hear snippets of President Kennedy’s 1962 “We Choose to Go to the Moon” speech, but also of Leon Bridges performing Gil Scott-Heron’s protest poem “Whitey on the Moon,” a politically charged anomaly on a soundtrack otherwise dominated by industrial noise and Justin Hurwitz’s gorgeously churning score.

Chazelle has a good ear, as admirers of “Guy and Madeline on a Park Bench,” “Whiplash” and “La La Land” already know. “First Man” is his first biographical drama and his first film not to concern itself with the lives of musical artists — or is it? One of the stray bits of trivia we learn here is that before Armstrong launched his storied aeronautical career, he was the music director of his college’s fraternity, a throwaway detail that also feels like a clue.

In this picture’s thoughtful, eccentric and sometimes worshipful-to-a-fault telling, Armstrong emerges as an obsessive artist in his own right, an expert technician whose less quantifiable temperamental gifts — a preternatural calm, a wry sense of humor, a daredevil streak that never feels motivated by ego — may well have made the difference between life and death. His blend of obsessive workaholism and emotional reserve armors him against grief, but it also distances him from Janet and their kids, who see increasingly little of him as he prepares for a journey from which he may not return.

Writing about “First Man” a few weeks ago from the Toronto International Film Festival, I noted that I liked the idea of the movie more than I liked the movie itself. That still holds true, although a second viewing has closed the gap significantly. Chazelle seems to be trying to both uphold and transcend the narrative template established by astronaut dramas like “The Right Stuff” and “Apollo 13,” with their scenes of hard-working men barking orders from ground control (Kyle Chandler does the honors nicely here), and of astronauts’ wives worrying that they may soon be widows. Even his missteps — the visual monotony of the handheld closeups, the over-insistent evocations of Karen’s death — underscore his desire to tell a story of collective accomplishment through one man’s extraordinary perspective.

Which brings us to the foolishly drummed-up controversy that preceded the movie’s arrival in theaters. You may have read the early festival reports noting that “First Man” doesn’t show the U.S. flag being planted on the lunar surface — a matter that was quickly seized upon by conservative politicians and commentators who, despite not having seen the film, wasted no time in lambasting it as anti-American. I question the judgment of anyone who would reduce a movie’s (or a person’s) patriotic spirit to a simple display of flag waving; more to the point, I question the judgment of anyone purporting to criticize a movie they hadn’t seen yet.

To be perfectly clear: The planting isn’t shown but the flag very much is, hovering over the lunar surface. Chazelle, more artist than propagandist, treats its presence as a matter-of-fact detail rather than a point of culmination; he’s after a response more complex and intimate than a swell of national pride. He takes an achievement that might have been played for easy triumph and casts it as one man’s solemn reckoning with the sorrows, failures, sacrifices and convictions that have brought him to this extraordinary moment. We may not truly know Neil Armstrong by movie’s end, but we know that his one small step contained multitudes.