In the current political climate, ‘The Oath’ is a frustrating watch 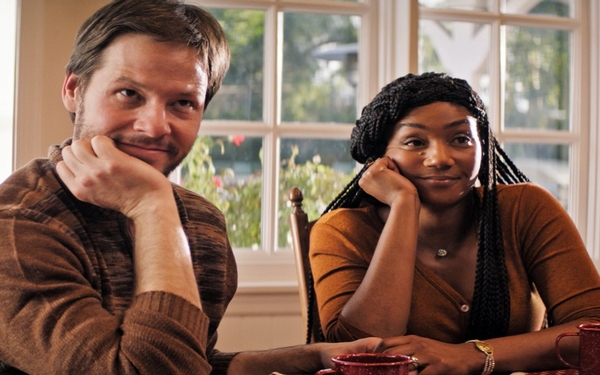 Ike Barinholtz and Tiffany Haddish in the film "The Oath." (Topic Studios/Roadside Attractions)

Not feeling stressed enough about politics these days? Ike Barinholtz’s “The Oath” is here to remedy that. The comedic actor makes his directorial debut with a politically charged comedy that’s sort of a satire, designed to wring wry laughs out of our deeply divided political state. But in this climate, it’s just frustrating and unpleasant to watch.

The premise plays on the well-known notion that discussing politics with family at Thanksgiving is fraught and awkward, with a twist. The government has required every citizen sign a “loyalty oath” pledging their patriotism, with a deadline of Black Friday. Barinholtz plays the über-liberal Chris, married to Kai (Tiffany Haddish), and he steadfastly refuses to the sign in protest.

Things come to a head when his family descends on their home for Thanksgiving. His clueless parents (Nora Dunn and Chris Ellis) aren’t a problem, but his brother, Pat (Jon Barinholtz), and his conservative girlfriend, Abbie (Meredith Hagner), are the burr in Chris’ side, despite Kai’s attempts to keep things copacetic. Their sister, Alice (Carrie Brownstein), and her family also attempt to keep the peace.

For the majority of the film, it’s just about the small annoyances of sharing space with people who you have to spend time with even if you’d rather not, and the small spats that erupt over negligible issues — all heightened by the “did you/didn’t you” questions about who might have signed the oath. But the film enters horror movie territory when two government agents (John Cho and Billy Magnussen) show up to question Chris about a report that he’s been pressuring someone not to sign.

Suddenly, the barbed family comedy turns into a bloody awful affair, and this is where the oath goes south. It positions the victim of an overly zealous police state as a wealthy white man, which is, frankly, tone deaf. The film’s messaging is all over the place. Suddenly our moral compass, Kai, becomes unreliable. You start to question what the film is trying to say: Should citizens sign a loyalty oath to the government to keep themselves safe? While the first two-thirds of the film vehemently argue against that, the last third seems to flip-flop on the idea.

“The Oath” backs itself into an impossible corner, and then relies on a deus ex machina to escape the bind it’s in, backing away from saying anything interesting or provocative. “The Oath” wants to have its pie and eat it too — lobbing political hand grenades and then running away from them, refusing to engage in the consequences of the scenarios it sets up.

Magnussen is magnetic as the mustachioed and psychopathic government agent Mason. Similarly, it’s a testament to Hagner’s performance that Abbie is completely unbearable. So why do the villains walk away with this movie? Because the “heroes” are inconsistent, which might actually be an unintentional comment on the way things are today in the political realm.

The neat ending is out of place with the violence that precedes it, and ultimately, this political charged satire about family debates argues that perhaps what’s right and moral is to avoid mixing family dynamics with politics, but that’s exactly what we should be doing in this current moment.

Rated R for language throughout, violence and some drug use.