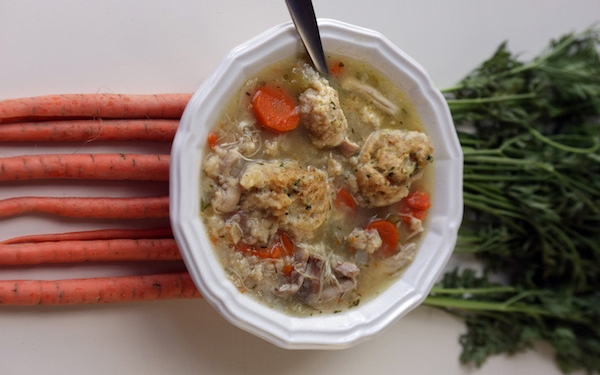 When people ask me “Why are you so weird?” I always look them square in the eye and say, “It is because I was raised without chicken and dumplings.”

My mother is a wonderful cook and a woman of many accomplishments, and I’m not just saying that because she reads my columns. But for reasons unknown to me, she did not, during my childhood, make chicken and dumplings.

So I did not come to appreciate the dish until adulthood, or at least late teenhood. For everyone else, it was the ultimate comfort food. But for me it was almost a novelty.

After I had it a few times, I thought, “Hey, this is the ultimate comfort food.”

But what about the dish makes it the culinary equivalent of a big hug? Why is it a meal that loves us as much as we love it?

It is soothing, is what it is. It’s warm and filling, with just enough carbohydrates to make us happy. That’s basically the working definition of comfort food.

I knew I was destined to make it for myself, but there was one important decision to make first: Southern dumplings or northern?

I decided to go with the northern dumplings for two reasons. First, I wanted to make as iconic a version of chicken and dumplings as I possibly could, and I thought that nothing is more thoroughly American than chicken and dumplings made from a recipe in “The Fannie Farmer Cookbook,” one of the most influential American cookbooks ever.

Also, there is the second reason, which is that I like the northern version better.

Nothing could be easier than making the chicken part of chicken and dumplings. It is a very simple, very basic recipe for chicken soup. You simmer pieces of chicken in water with mirepoix (carrots, celery and onion), seasoned with a bit of thyme and rosemary.

That’s as far as Fannie Farmer went (or at least Marion Cunningham, who took over the editing duties so long ago that she has been dead for six years). The broth part is just a thin soup. But I like my chicken and dumplings to have a little fortitude to it — some grit, some backbone, some spirit.

So I thickened it with a little cornstarch mixed with cold water. Fortitude comes cheap.

They are called feather dumplings, presumably because that is how light they are. Real dumpling aficionados — those who grew up eating chicken and dumplings — know the difference between dumplings that are dropped and those that are rolled. These are dropped by the spoonful into the simmering water, not rolled out into shapes first.

It must be the baking powder that makes these so light. They steam on top of the broth, absorbing the chicken flavor without taking on the fat. And unlike some versions, these dumplings maintain their shape and do not fall apart.

The important part, of course, is the taste. With just the right amount of onion, not to mention a bit of butter, the dumplings and the chicken simply swaddle you with goodness.

For the chicken and broth

For the feather dumplings

1. Place the chicken pieces in a large pot with a lid, and cover with water. Add the carrots, celery, onion, thyme, rosemary, salt and pepper. Bring to a boil and reduce to a simmer. Cook for 20 minutes. This will make a thin broth; if you want the dish to have the consistency of gravy, mix together the cornstarch with 2 tablespoons cold water, and add to the pot. Boil 1 to 2 minutes, until thickened.

2. If you want, remove the chicken pieces after 20 minutes and shred or cut the meat off the bone. Return the meat to the pot and continue to step 3.

3. While the chicken cooks, combine the flour, bread crumbs, baking powder and salt in a mixing bowl, and stir to mix. In another bowl, lightly beat together the egg, melted butter, onion and milk. Stir in the dry ingredients to make a stiff batter. Stir in the parsley and pepper.

4. When the chicken has simmered for 20 minutes, drop spoonfuls of dough on top of the bubbling broth. Cover and steam for 20 minutes without lifting the cover.

Adapted from “The Fannie Farmer Cookbook,” by Marion Cunningham