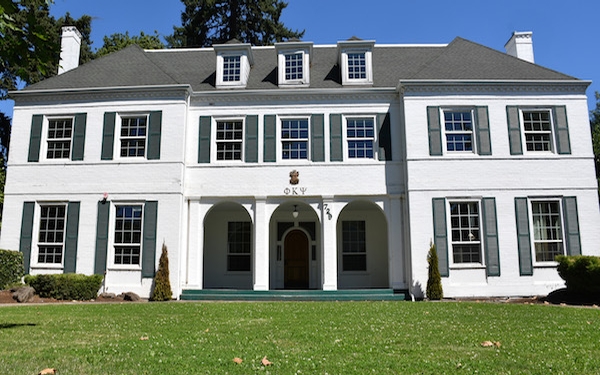 You can visit the Willamette Valley in Oregon just about any fall to sample wines, beers and spirits, hike the buttes, float in a river or cycle alongside one. But this August, there was a baby boomer bonus: the chance to see “National Lampoon’s Animal House” slip awkwardly into middle age.

“Animal House” was filmed on and near the University of Oregon in Eugene in 1977. It was released in 1978 to riotous laughter despite, or perhaps because of, its poor taste. It made John Belushi a movie star and launched the directing career of John Landis.

To mark its 40th birthday, many in and around Eugene put together celebrations in August — especially the people in nearby Cottage Grove, scene of the film’s climactic parade.

On campus, the Erb Memorial Union, long a gathering place for students, got a gleaming upgrade in 2016. But look closely at the glass-walled dining area known as the Fish Bowl. Yes, this is where Belushi ridiculously overloaded a tray, sat at a table to do his impression of a zit, then set off a food fight.

The cafeteria line is now a Chipotle Mexican Grill. But there’s still a series of window booths, and two of them are within a few feet of the spot where Belushi and company sat.

As for the rest of the University of Oregon, the noble quad, athletic fields and fraternity row that played such central parts in the story? Well, you can certainly see them, but that’s where the awkwardness comes in.

The university doesn’t completely ignore the movie. Between the third and fourth quarter of every Oregon Ducks football home game, the crowd sings “Shout!” And most campus tours mention it.

But from the beginning, the college was wary of “Animal House.” Even when the University of Oregon’s president agreed to let Universal film on campus for a month in exchange for $20,000, he insisted that the campus go unidentified.

That was fine with the producers, who wanted to create a generic college landscape; they labeled the campus Faber College.

When the movie came out, it was disrespectful, gratuitous and often mean-spirited. Even as it ridiculed the narrow-mindedness of the early ‘60s, it carried plenty of ‘70s presumptions about sex and race that many viewers now find insulting or ridiculous.

The university has plenty else to celebrate. The world’s oldest shoes, for instance. (Yes, really. They’re in the university’s Museum of Natural and Cultural History, and they’re between 9,100 and 10,400 years old.)

Also, the university’s track and field stadium, Hayward Field, a great source of local pride since the days of Steve Prefontaine in the 1960s, is under reconstruction in preparation for the 2021 International Association of Athletics Foundations World Championships.

Any visitor should save a few minutes for the Jordan Schnitzer Museum of Art, a provocative collection in a striking building.

Given those options, only a lowbrow movie geek should linger along campus-adjacent East 11th Avenue, where the “Animal House” fraternity row is or was. But a few minutes’ visit may be instructive. And as somebody once said, “Knowledge is good.”

The bad news is that the original bedraggled “Animal House” at 755 E. 11th — a farmhouse-turned-frat-house-turned-halfway-house that was near collapse when location scouts found it — was leveled in 1986. (There’s a plaque half-hidden in the bushes along the sidewalk.)

Next door is the Phi Kappa Psi house, which stood in for the movie’s snobbish Omega house, where Kevin Bacon’s character is seen asking “Thank you, sir, may I have another?” in a hazing ritual.

Whether you’re on the “Animal House” trail or not, it’s a good idea to get out into the countryside.

I suggest a bike ride along the 12 miles of paths along the Willamette River or a hike up Spencer Butte, which offers a 360-degree view. It’s 1.5 to 2 miles up and back, depending which routes you take.

One day I had lunch at Rattlesnake BBQ at the Dexter Lake Club, about 20 miles southeast of Eugene, a Texas-style barbecue restaurant and bar. As it happens, its building is the mostly black bar where the road-tripping boys of Delta House found Otis Day and the Knights playing.

The club’s neon sign remains and a few reminders of the movie are scattered around.

The big surprise for locals in the ‘70s was that Landis and company had chosen to “create” a black bar in a rural area that was so white that African-American extras had to be hired from Portland, 110 miles north of Eugene.

The big surprise for a visitor now is that Landis and company could shoot anything in a room with such a low ceiling — less than 7 feet in some places.

Now, about the Deathmobile and Cottage Grove, the town whose Main Street was the scene of the disastrous parade that ends the movie. On Aug. 18, Cottage Grove again closed Main Street, this time to stage an anniversary dance party and parade that drew about 3,000 people in togas.

Many of them danced to the music of Otis Day (seen in the movie singing the Isley Brothers’ “Shout!”). Others lined up along Main Street to admire a facsimile Deathmobile, designed to match the parade-disrupting, Belushi-bearing vehicle in the film.

Unfortunately for visitors, the Cottage Grove Chamber of Commerce, which owns the Deathmobile, keeps it under wraps.

But the chamber’s executive director, Travis Palmer, said that on Oct. 31, it will be on display at the corner of Main Street and Highway 99.