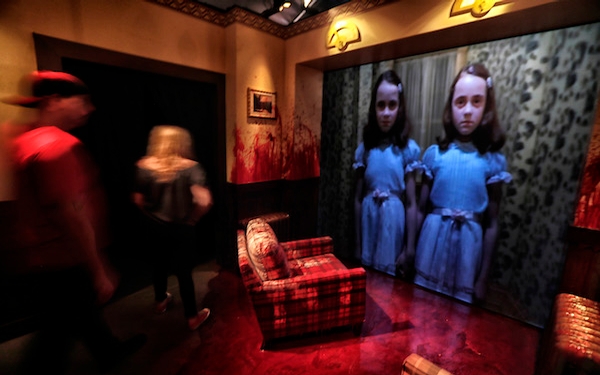 Visitors pass through the blood filled hallway of the Overlook Hotel inside the Shining maze at Halloween Horror Nights at Universal Studios on Sept. 28, 2017. (Robert Gauthier/Los Angeles Times/TNS)

In years past, Six Flags Magic Mountain’s annual Halloween celebration isolated the monsters and ghouls to certain areas of the amusement park while keeping other parts, such as the kid-centric Bugs Bunny World, as a scare-free sanctuary for parkgoers who wanted no part of what the Southern California park calls Fright Fest.

Those safe zones are gone this year. During the 19-night Fright Fest, the entire park in Santa Clarita is turned over to costumed maniacs, bloodsuckers and creeps. Even Bugs Bunny World goes dark.

Halloween is such a monster hit for the theme park industry that operators must continually devise new ways to expand the autumn screamfest and scare up even more dollars from horror fans.

This year, Southern California parks have added extra nights to Halloween celebrations — in some cases, well before fall’s official start — enlarged the events to engulf their entire parks and developed extravagant new dishes and alcoholic drinks to complement their spooky attractions.

And prices for almost everything have crept ever upward.

Prices are rising because demand for all things Halloween continues to surge.

The average wait time for attractions at Disneyland in September is about 20 minutes, he said. But wait times jump to as high as 90 minutes in October because of the park’s annual Halloween celebration, White added.

Jonathan Green, a 33-year-old theme park fan from Santa Clarita, said he recently spent about $180 for food and an admission ticket to Universal Studios Halloween Horror Nights. He praised the high level of detail that was put into the haunted mazes and the costumes worn by the scare actors in the park.

“Theme parks are so expensive these days that it’s important to feel like you are getting something for your money,” he said. “The parks realize, ‘Hey, we need to put out a solid product.’ ”

A strong economy and demand for new, immersive experiences are fueling the popularity of Halloween events, theme park operators say.

“The more experiential we become, the more popular we become,” said Charity Hill, executive producer of Dark Harbor, the Halloween celebration at the Queen Mary in Long Beach. She said the event at the retired ocean liner recorded its highest attendance numbers last year.

During this Halloween season, Americans are expected to spend $9 billion, the second-highest amount in the 14-year history of the annual survey commissioned by the National Retail Federation. The survey said 21 percent of the nearly 7,000 Americans questioned said they plan to visit a haunted attraction this year, little changed from the previous year.

To take advantage of the demand, Disneyland Resort, where the scares are relatively tame to keep from frightening off families with small children, added eight days to its Halloween celebration, running from Sept. 7 until Oct. 31. It was launched Sept. 15 last year.

At neighboring Disney California Adventure, the entire park is sprinkled with Halloween decorations and spookified attractions. Until last year, only one specific area of the park — Cars Land — got a scary makeover.

This year, the drop-tower ride, Guardians of the Galaxy: Mission Breakout, has been remade with an escaped-monsters theme.

Warner Bros. Studios in Burbank, which jumped into the Halloween craze in 2016 with a two-night event, has expanded its scarefest to 13 nights, adding mazes, exhibits and a creepy circus, featuring a killer clown.

“The main impetus to going bigger this year was the feedback we got last year from our guests,” said Gary Soloff, marketing director at Warner Bros. Studios. “The feedback was that it wasn’t enough. They wanted more.”

Universal Studios Hollywood, where Halloween Horror Nights extends from Sept. 14 until Nov. 3, is targeting foodies by offering six decadent dishes made specifically to complement one of the park’s haunted mazes, which features creatures and scenes from the Netflix television series “Stranger Things.” The dishes include an Upside Down Burger and Eleven’s Waffle Extravaganza.

Like Six Flags Magic Mountain, Knott’s Berry Farm in Buena Park has also expanded its scare zones — areas where guests are chased and menaced by costumed actors — to cover all areas of the 160-acre park.

Dark Harbor, the Halloween celebration that began Sept. 27 and runs until Nov. 2 at the Queen Mary in Long Beach, is targeting adult spook enthusiasts by doubling to four the number of cocktail bars hidden inside haunted mazes.

Visitors to the mazes must find secret passageways to uncover the bars, where costumed bartenders serve Halloween-themed drinks.

“I think people are being entertained on multiple levels,” said Hill, noting that one of the hidden bars offers guests various Scotch whiskeys to taste.

Instead of fast food, she said, the event is trying to tempt guests with high-end dishes such as lobster fries and tri-tip sliders.

“We are trying to push the envelope on food and beverage,” Hill said.