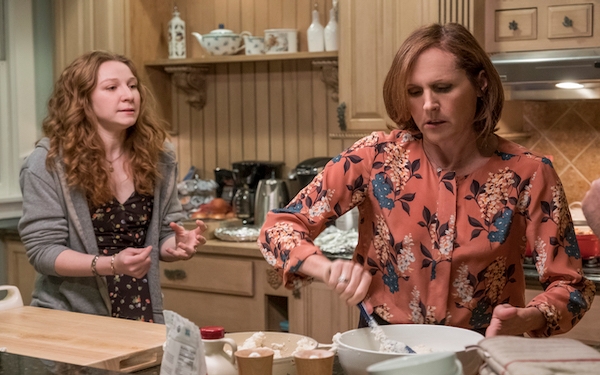 The first thing you see in “Private Life,” Tamara Jenkins’ brittle, tender and superbly acted new movie, is a husband jabbing a syringe into his wife’s rear end, administering a hormone to stimulate egg production.

Rachel and Richard Grimes (a beautifully matched Kathryn Hahn and Paul Giamatti) are trying to conceive a child through in vitro fertilization, and the recurring image of a needle piercing flesh serves as both a comic motif and a poignant metaphor. But it’s also just one more small, stinging reminder of the steadfast devotion that love, marriage and family require.

For Rachel and Richard, it requires not just a lot of poking and prodding but also the indignity of having their emotions, their neuroses and their bodily functions held up for a movie audience’s intimate scrutiny.

Intimacy, of course, is one reason we go to the movies, and Hahn and Giamatti allow nary a hint of self-consciousness to cloud their pitch-perfect performances. They take their cues from Jenkins, who based the story on her own experiences starting a family with her husband (screenwriter Jim Taylor), and who probes her characters and her own personal experience with ruthless dexterity and limitless compassion.

The humor and heartache of sticking with family through tough periods of transition has long been Jenkins’ sweet spot as a writer and director, as seen in her earlier comedies, “Slums of Beverly Hills” (1998) and the Oscar-nominated “The Savages” (2007). Given the decade-long gaps between features, which speaks to everyday industry sexism but also to the unusual care with which Jenkins finds her stories and subjects, it’s fitting her new movie is very much about the agony of waiting.

Richard and Rachel, writers who live in a rent-stabilized East Village apartment crowded with books, paintings and two large dogs, have been trying to have a child for a while. Their experiences can be summed up in a log line — they’re desperate, they’re in their 40s, they’ve tried everything — but Jenkins constructs an entire narrative from little exchanges, reveries, complications and setbacks. With a mix of concentration and expansiveness that can take your breath away, she unpacks exactly what “they’ve tried everything” means.

It means discussing the logistics of sperm counts and egg retrievals with their doctor (a good-humored Denis O’Hare, who tends to pop up with a speculum in hand). It also means venturing down a different avenue at a meeting with an adoption agency, during which the Grimeses smilingly position themselves as ideal parents and pray the agency rep (Siobhan Fallon Hogan) isn’t judging them by the erotica hanging in their living room. A particularly painful flashback, in which Rachel and Richard are briefly matched with a birth mother, goes from joyous to wrenching in a heartbeat.

Conception and family planning typically occupy a weird zone between the personal and the universal, but Rachel and Richard’s long-term struggles have yanked away any semblance of privacy. It isn’t just adoption agencies and fertility specialists putting their bodies and minds under a microscope. Even when talking to their friends and relatives — including Richard’s brother, Charlie (John Carroll Lynch), who lends them money for their IVF procedures, and his less supportive wife, Cynthia (Molly Shannon) — they register the emotional cost of every strained smile, the exhaustion of having to explain, with sheepish regret, that they’re giving “the fertility stuff” yet another try.

But “Private Life” advances to another level of empathy, enriching its emotions and deepening its family ties, when Rachel and Richard decide to ask a loved one for help. They have an especially close relationship with Charlie and Cynthia’s daughter Sadie (a flat-out terrific Kayli Carter), a smart, vivacious 25-year-old who’s struggling through school and trying to figure out her own steps toward a writing career. She crashes with her aunt and uncle for a spell that stretches on for weeks when they ask her — and she agrees — to be their egg donor. (The movie takes pains to emphasize Sadie and Richard are not related by blood.)

The challenge of preparing for another IVF procedure, now as a trio rather than a duo, brings Rachel, Richard and their niece together as little else could — before long, Sadie is getting those hormone injections too — even as it throws their generation gap into startling relief. The impulsiveness with which Sadie agrees to give her loved ones “the gift of life,” as she notes with heartwarming sincerity, turns out to be a mixed blessing. Giving her aunt and uncle an early taste of parenthood, Sadie can be both thoughtful and thoughtless, hard-working and irresponsible, and prone to saying the first thing that pops into her head — as she does, disastrously, at a Thanksgiving dinner where everything is yanked out into the open.

Her script understands the familiar grooves into which longtime spouses can lapse. Richard and Rachel pick at each other’s wounds with practiced skill and also with the eloquence of people who love words as much as they do each other. But while Rachel is more apt to explode in anger, it’s Richard, ostensibly the more patient one, who is more apt to assign blame.

It can be startling when Giamatti gives his characters over to their long pent-up rage; there’s a moment here, in a clinic waiting room crowded with other aspiring parents, that rivals the actor’s spit-bucket meltdown in “Sideways.” But it’s no surprise that he’s been called on, not for the first time, to embody a stabilizing force. He’s the shlubby cushion, the one who holds and steadies Rachel’s hand through an ordeal that is, the movie rightly notes, hardest of all on her.

In some ways, the endless stream of medical procedures is the least of Rachel’s worries. Whether she’s furiously scrubbing the bathtub or railing at the sexist cover treatment for her latest manuscript, she can barely contain her rage at the social and biological imperatives that have made work, marriage and family a uniquely tricky proposition for women.

But while Hahn expertly navigates her character’s wildly fluctuating moods, her strongest moments are her quietest — where you see her retreat into silence and register her anger, anxiety or, in the piercing final scene, tremulous hopefulness. The gift of life may elude Richard and Rachel and countless other couples like them, but it courses through every moment of this movie.