‘Mid90s’ is a well-executed slice of ’90s nostalgia 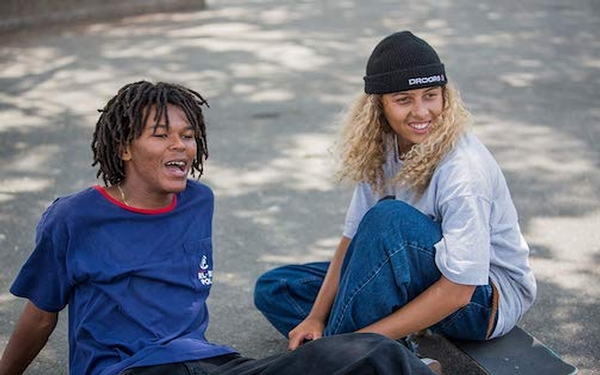 Jonah Hill’s directorial debut “Mid90s” ends with what is seemingly the film’s inspirational spark. It’s a sequence shot in the style of those ’90s homemade skate videos, the ones that would have been passed around on VHS tapes housed in battered paper covers. Set to classic rap music, the style is grainy, handheld, filmed mostly with a fish-eye lens, following teen boys on skateboards as they grind rails, kickflip and ollie. They hang out in parks, cruise in the backseats of cars and taunt the camera, helmed by a skater nicknamed “Fourth Grade.” It’s a perfectly executed slice of ’90s nostalgia, and the film begs the question, just who are these kids?

“Mid90s,” written and directed by Hill, opens with a shockingly violent beating, punches thrown by Ian (Lucas Hedges) at his little brother, Stevie (Sunny Suljic), thudding like cannonballs. This brutal beatdown is the true thesis of “Mid90s,” which explores the violent initiations of boys into manhood against the backdrop of a laid-back LA skate shop crew. The film’s poster tagline, “Fall. Get back up” underlines the notion of bootstrapping violent masculinity, but quickly, this coming-of-age film becomes body horror.

Taking the hardest hits is the shrimpy, achingly young Stevie (Sunny Suljic). When his brother beats him in his bed, he swallows his cries. Repeatedly smacking into concrete while mastering his skateboard is cake. These are his own hits, not administered by his brother, and with these hits he’ll prove himself to the group of skater boys he idolizes who hang at the skate shop on Motor Avenue. Eventually, they adopt him as one of their own.

The pack of wild boys groom Stevie in their own contradictory and troubling ways of manhood, from rampant homophobia to drinking, drugs and sex. He drifts away from his mother (Katherine Waterston) and rejects his brother while falling into homosocial love with the group of four-wheeled rascals. Ray (Na-kel Smith), who has his sights firmly set on professional skating, tries his best to undo the most harmful of the lessons for the young Stevie.

Ray emerges as the sole voice of reason. At one point he surveys Stevie, recovering from his worst injury yet, and says, “You take the hardest hits of anyone I’ve ever seen — you know you don’t have to do that.” It’s the only sense any character makes during the entirety of “Mid90s.” It’s both a relief, and far too late.

Hill has excelled in casting the posse with a clutch of young discoveries. Smith is a standout, even more so than the talented young Suljic, who stunned in last year’s “The Killing of a Sacred Deer.” Ray is the heart of the film, attempting to steady the young Stevie, who flails among all the dangerous mixed messages. The gloriously golden-tressed Olan Prenatt is another wonderful discovery. He and Smith play the devil and angel on Stevie’s shoulders, respectively.

However, ascribing this much intent of meaning to “Mid90s” may be an overreach. The film is an achievement in authentic world-building, but you can’t shake the feeling that what “Mid90s” does say isn’t perhaps what Hill intended it to. While observing the rituals of friendship and socialization among young men is fascinating, what we take away is ultimately, these cool kids are vulnerable more than anything else — they might not think so, but owning that is the coolest of all.

Rated R for language throughout including sexual references, some drug and alcohol use, and brief violence — all involving teens.