On Her Shoulders: the emotional price of Nadia Murad's pursuit for justice 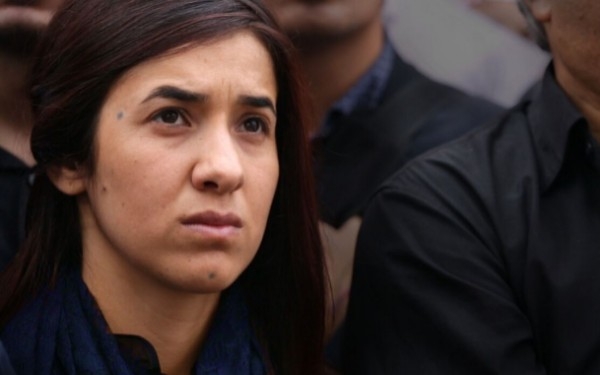 Nadia Murad is only 25-years-old and she is already a Nobel Peace Prize Winner. Nadia Murad is only 25-years-old and she is already a Goodwill Ambassador to the United Nations. Nadia Murad is only 25-years old and she has already been deemed a hero of her people. Nadia Murad is not a normal 25-year-old. These awards, these honors, they are just a symbol of all the suffering that her and her fellow Yazidi people have had to endure ever since ISIL came and laid waste to their community. Presenting the exquisite documentary On Her Shoulders, director Alexandria Bombach is not recounting the heroism of surviving the genocide that much of Nadia’s family did not. On Her Shoulders is about the 25-year-old young woman who has the determination to speak against her transgressors in order to bring them to justice, despite the emotional fatigue of reliving the terror every day. On Her Shoulders is about the extraordinary 25-year-old young woman who wants nothing else but to simply be ordinary.

Bombach, with tender and quiet direction, gives us a glimpse into Nadia’s hectic daily life where she is constantly pushed in front of a microphone and asked to recount the horrors of August 3, 2014, the day when she lost her mother and six brothers, and when she herself was kidnapped into sex slavery for three months by ISIL. Journalists, politicians, and diplomats prod her for details of her experience, and she has consigned herself to taking on that role. The world must know what happened to her small, peaceful hometown of Kojo in Northern Iraq, but that means she will be met with the wrong questions; instead of asking for details on how ISIL raped her, on the specifics of the terror she experienced, she urges the world to ask her how to stop it from happening to anyone else.

What’s fascinating is how Bombach uses her camera to show us the various versions that Nadia has had to make of herself in order to fit into this ideal of a public figure. When she is on a pedestal with a watchful audience and a microphone at her lips, her voice rings with defiance and strength. In front of hundreds of Yazidi refugees in Greece, she knows she must be the one who holds her ground and be the symbol of hope for the people whose lives are drowned in uncertainty.

Then, when she meets one-on-one with impossibly important diplomats, she is shy and modest, biting her fingernails while they tell her translators how much they praise her bravery and courage. She doesn’t say much in response, maybe a quiet ‘thank you’, perhaps only because she sees her mission as neither brave or courageous, just simply necessary.

And then we see Nadia in a different space, with the people who have stood by her side since she found refuge in Germany. Murad Ismael, co-founder of Yazda, a non-profit organization dedicated to the aid and relief of the Yazidi people as they are displaced around the world, has watched and supported Nadia as she has found her voice in the years after the genocide. In the rare scenes where Bombach shows Nadia without a camera or microphone ceremoniously ready to capture her story, Murad brings out Nadia’s beautiful adolescence. Snarkiness, jokes and jabs like a brother and sister only know how to throw. His support for her is equally matched by his concern for her as a young woman. When the world sees a confident, heroic woman talking to the United Nations pleading to help her people, Murad sees a young woman who may be reaching her limit. How much can one person rest on her shoulders before the weight of history, tragedy, and expectation caves in on them? Murad seems unsure, Bombach’s camera seems unsure, but one thing is for certain, Nadia will keep on speaking up and out against ISIL until she is assured the world is listening.

On Her Shoulders reaches its peak the day Nadia is to be sworn in as the first Goodwill Ambassador for the Dignity of Survivors of Human Trafficking. A monumental day for her, her people, and everything she has worked for. She goes in for a photoshoot before she is to sit at the head of the world’s table. As she poses unsmiling, the camera flashes, igniting the glaze of tears that fill her eyes. Her eyes pivot to look straight into the lens, and you can see it. Right there. The pleading of a young woman to make it stop. Make the pain of her people stop. Make the people pay who brought so much suffering to hers and thousands of others’ lives. Let her be normal once again.

And then we cut to the chamber of the United Nations, a room filled with flags and policies and promises. She sits behind her microphone of honor and is asked, once again, to recount her story. She does. And it won’t be the last time.

ON HER SHOULDERS is in theaters now!