Rami Malek makes a fab Freddie Mercury, but ‘Bohemian Rhapsody’ will not rock you 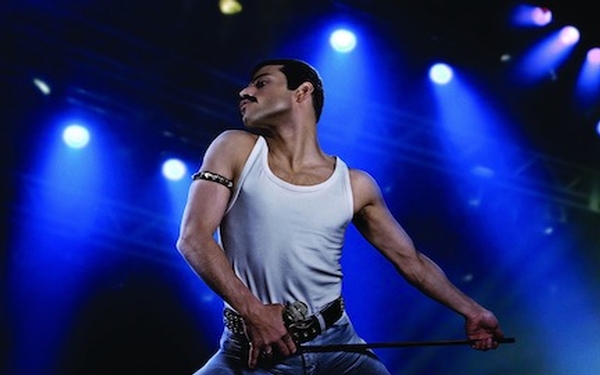 It takes just two sentences for “Bohemian Rhapsody” to own itself — no, not Queen’s immortal chart topper, but rather this sprawling, jumbled and disappointingly airbrushed new movie about the legendary rock band and especially its incandescent frontman, Freddie Mercury (Rami Malek). It’s Freddie who, in 1975, decides that Queen will defy formula and craft a new musical masterpiece that fuses ballad, opera and rock inspirations into an ear-tickling, genre-melding opus for the ages.

But the finished work predictably meets resistance from an EMI Records executive named Ray Foster, who’s convinced that no radio station will play a single that runs six minutes long. (Foster, a fictionalized character, is played by a nearly unrecognizable Mike Myers, in a “Wayne’s World” tie-in that almost but not quite justifies the price of admission.) The irony is that “Bohemian Rhapsody,” a song that triumphantly bucked convention, should now serve as the title of a movie that embraces every cliché in the days-of-our-lives biopic handbook.

You know what you’re in for from the fakeout of a prologue in which Freddie dons a singlet and marches onto a stage in front of thousands of screaming computer-generated fans at Wembley Stadium. It’s 1985, at the massive Live Aid concert in London, a crucial moment of resurrection for Mercury and the embattled band — which naturally means that before we even hear the first lick, the movie will abruptly cut away to 1970s London, diving headlong into a feature-length flashback showing How All This Came to Be.

Even in a pre-“Walk Hard: The Dewey Cox Story” world, did this kind of how-I-met-your-Mama structural device ever really work? Ostensibly designed to build suspense and anticipation, the opener instead sets a lazy narrative pattern for a movie that, as written by the British bio-mush specialist Anthony McCarten (“Darkest Hour,” “The Theory of Everything”), wholly embraces the bogus wisdom of hindsight.

The story of Queen’s glorious, turbulent, often-controversial rise to fame is, of course, widely known; the band’s dizzyingly playful, singable and expansive musical catalog, even more so. But surely this is all the more reason for a movie about these artists to feel wildly urgent, unpredictable and alive, to remind us of a time when form-busting experimentation and glam-rock flamboyance were hardly guarantors of musical immortality.

And at times this “Bohemian Rhapsody,” credited to director Bryan Singer (who was fired during production and replaced by Dexter Fletcher), does stir to a kind of life. No picture featuring Malek’s droll, mischievous and wholly committed star turn could really do otherwise. The compellingly soft-spoken star of “Mr. Robot” may not have been an obvious choice to don Freddie Mercury’s silver-sequined jumpsuit and almighty pornstache, but Malek hurls himself into his rock-god transformation with a voracious, go-for-broke energy that keeps you watching and, every so often, believing.

The five-octave singing voice we hear may be Mercury’s (with some additional vocal work by legendary Mercury impersonator Marc Martel), but the galvanizing star presence and exuberant, hip-slinging bravado are very much the actor’s own. Malek is even more persuasive in Freddie’s quieter, more conflicted offstage moments, when that voice turns gentler and more cajoling, and he’s forced to engage with people beyond the parameters of a call-and-response routine.

They include his bandmates, guitarist Brian May (Gwilym Lee) and drummer Roger Taylor (Ben Hardy), whose band Smile has just lost its lead singer in 1970 when Freddie comes a-crooning. One blast of this stranger’s heavenly voice — improved, he notes, by his four extra incisors — is all it takes to overcome their initial skepticism, and lo! Queen is born, with bass guitarist John Deacon (Joseph Mazzello) rounding out the ranks in short order. Meanwhile, Freddie’s tradition-minded Parsi immigrant parents (Ace Bhatti and Meneka Das) watch in uncomprehending dismay as their son, born Farrokh Bulsara, morphs into an Icarus-like celebrity, a high-flying musical genius and a one-man whirlwind of sex and tabloid scandal.

The music, the sex and the scandal all went hand-in-hand-in-hand, of course. And “Bohemian Rhapsody,” cutting breathlessly between crowded venues and recording studios, from behind-the-scenes spats to world-tour montages, tries to achieve an infectious, unruly vision of art and life flowing inexorably together. We hear the inspired early bursts of creativity and innovation that culminated in Queen’s initially polarizing, now-celebrated magnum opus, “A Night at the Opera.” We register the early signs of internal strife and the effect of Freddie’s closeted sexuality, which goes largely undiscussed by the band even as it becomes increasingly hard to ignore.

But rather than achieving the desired synthesis of telling details and major milestones, the movie too often seems to be merely cramming — multitasking, even — at the expense of providing the kind of detailed, insightful musical scholarship that might have allowed us to appreciate those songs anew. The few how-was-this-written jam sessions we get are fairly bland: That irresistibly self-aggrandizing anthem “We Will Rock You” is explained away with some mealymouthed blather about audience participation. “Killer Queen,” the band’s first big international hit, gets even shorter shrift, as does the incomparable “Under Pressure” (one can only assume Tilda Swinton was unavailable to play David Bowie).

“Love of My Life” is poignantly tied to the moment when Freddie comes out to Mary Austin (a lovely Lucy Boynton), his one-time fiancée and lifelong best friend. (He says he’s bisexual, and she says he’s gay; the debate still rages.) Before its release, “Bohemian Rhapsody” was bedeviled by rumors that it had downplayed Mercury’s sexuality, a charge that those involved with the movie all vehemently denied. To be sure, it doesn’t shy away from Freddie’s relationship with his conniving manager and lover, Paul Prenter (Allan Leech), the designated villain of the piece; it also grants Freddie the pleasure of a soulful meet-cute with his future partner, Jim Hutton (Aaron McClusker).

Even still, there is something woefully reductive, even pernicious, about the narrative shorthand used to elide Freddie’s sexual relationships with men: a glimpse of leather here, a truck-stop montage there. There’s also something oddly moralistic, even punitive, about the way Freddie’s increasingly debauched, hard-partying ways drive a wedge between himself and his bandmates; it’s not that Brian, Roger and John aren’t allowed to react with cross-armed disgust, but that the movie too often seems to share their attitude. Even more irritating is a wholly inaccurate later scene in which Freddie tells his bandmates in 1985 that he has AIDS, a fabricated detail that feels like an attempt to tidy up the obligatory reconciliation narrative.

Given that May and Taylor are producers on the movie, as is Queen’s longtime manager Jim Beach (played by Tom Hollander), it’s hard not to interpret the picture as a clumsy, conflicted attempt to grapple with Mercury’s legacy, to honor his undeniable significance while also wresting some control of the Queen narrative from his grip. (It’s also hard not to speculate why some of the less flattering details, such as the band’s decision to perform in apartheid-era South Africa, have been conveniently omitted.)

But the movie’s selective history doesn’t simply sell Freddie Mercury short. It sells Queen short, depicting May, Taylor and Deacon as purely reactive figures and treating the music as aural wallpaper, rather than as a treasure trove of eclectic influences and revolutionary impulses, something to be studied, scrutinized, embraced. And while the Live Aid climax delivers an enjoyable surge by the time we return to it, it’s disappointing that a Queen biopic should otherwise be so deficient in basic musical scholarship, so disinclined to provide an analytical point of view. What made their sound so indelible, and how did it come into being? “Bohemian Rhapsody” abandons its critical duty, which doesn’t mean we have to.