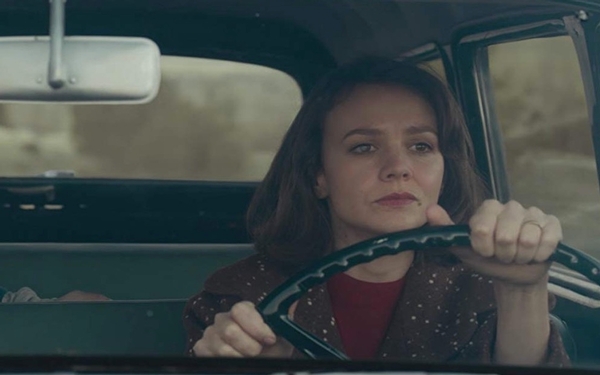 Something curious happens when two actors share a confined space in front of a camera. The effect isn’t “stagy,” or theatrical, because on the stage a claustrophobic kitchen scene, for example, still allows room for a certain amount of space between and around the performers, even in the tiniest of theaters.

In “Wildlife” the characters played by Carey Mulligan and Jake Gyllenhaal find themselves in key moments trapped in their ordinary 1960 Great Falls, Mont., kitchen, evading each other’s eyeline or bearing down on each other. The marriage is down to its last few threads.

Mulligan, particularly, excels in these scenes, making them both big (in terms of banked emotions) and small (in the telling details, the heartbreaking attempts to cheer her husband, the realization that he cannot be reached). Gyllenhaal does some of his subtlest work to date in “Wildlife.” Dano co-wrote the adaptation of the 1990 Richard Ford novel with his partner, Zoe Kazan, and this is Dano’s feature directorial debut — a really good one.

The story, be assured, is more than two people in one kitchen. Golf pro Jerry (Gyllenhaal), an insecure glad-hander frequently between jobs, has a bright, sweet, kind teenage son, Joe (Ed Oxenbould), with his wife, Jeanette (Mulligan). They’ve recently moved from Idaho to Montana. A forest fire rages nearby, in the Rockies. Jerry once again finds himself out of work, and stuck too often at home, in a stew, with a beer, and eyes full of self-directed disappointment.

The confines of their one-story house pushes the bodies closer together, making the proximity a little intense, and the slights more hurtful. Production designer Akin McKenzie deserves awards consideration simply for the deadening, period-accurate combination of tan kitchen cabinets and dusty-purple walls.

Jerry takes off and joins the firefighters, for barely any money, to give himself some direction and a means of temporary escape. Jeanette’s part-time work as a swim instructor introduces her to Warren Miller, the town big shot, the lumpen, limping auto dealership maven played by Bill Camp. The pivotal sequence in the three distinct chapters of “Wildlife” depicts a dinner party at the notably cavernous Miller home, which Jeanette — lunging in her new life, separated from Jerry — sees as an opportunity for advancement. Young Joe barely recognizes his mother in manic, boozed-up party mode.

Australian native Oxenbould has an unusually light and effective touch for a teenage actor. He was 15 when Dano filmed “Wildlife,” mostly in Oklahoma. Even if you don’t personally respond to Ford’s somewhat diagrammatic tale of one boy’s coming of age, it’s a splendid ensemble Dano has gathered to tell the story. Dano has said in interviews that once he found his final image, he had his movie, and he was right; I’ll leave it for you to discover. Dano’s direction favors fixed compositions, with the occasional sideways tracking shot. The effect isn’t static, however; cinematographer Diego Garcia has a shrewd eye for color and tone.

As an actor Dano can be frustratingly sluggish, though he was wonderful as Beach Boy Brian Wilson in “Love & Mercy.” But what he favors in front of the camera — steady, methodical rhythms and a dogged patience with each new exchange — turns out to be well-suited for his new career as a director. “Wildlife” keeps close tabs on its central family unit. By the end Joe’s job as a portrait photographer makes perfect sense. He’s been keeping an eye on his parents for years, trying to sort through what they mean to each other, and what their union (or dissolution) means for him.

That’s the peg for this lovely, sad but far from hopeless picture.