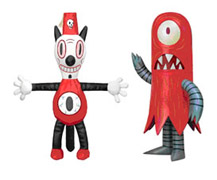 with the pathos of life ripens. Like a melancholic song, turn to Gary Baseman's work, say his aptly titled A Moment Ago Everything Was Beautiful and reassure yourself that you are not alone in times of festering pathos.

Take his series Happy Idiot , in which a three-tiered snowman falls in love/lust with a mermaid. The only anecdote for this mismatch to possibly work is for the snowman to melt himself and give his suicidal water so that the mermaid can live; a metaphor for anyone with a savoir complex or any man with a penchant-bordering-on-obsession for difficult women.

Or Dumb Luck , in which a rabbit has castrated his own foot (replaced by a peg leg) in order to receive the good fortune that this charm promises. Both iconic Baseman creations are on display in this mini-retrospective at the Laguna Art Museum.

Baseman taps into the chaotic, diametric duality of the human psyche like no other, and it is for this reason that his art is so, as he's coined it, Pervasive . Exploiting every medium – galleries, magazines, TV, lecture halls, games (his art adorns “Cranium”) and toys – Baseman's own subversive complexes, the marriage of Eros and Thanatos in The Dance, reverberate with our own unconscious desires.

Those less in touch with their id, ego and superego (see: the three-tiered snowman) may see his cartoon-y creations (indeed, he won an Emmy for Disney's “Teacher's Pet”) on a “how cute” plane. However, the cartoons operate on a deeper psychological level that children, somewhere in their Bettelheimian psyches, resonate with – the monster the child is afraid of isn't under his bed, But, as Baseman reveals in the diptych Suffer Enjoy , is located just beneath his own ethereal epidermis. The lid is always ready to pop off the id.

While it would be easy to classify Baseman as Dali with a better sense of humor or Bosch with no sense of humor at all, each new Pervasion places him in a class of his own where he is the teacher's pet. He is not a next. He is a first.