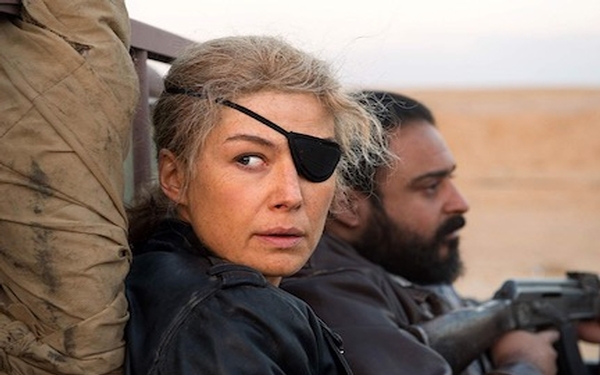 In 2015, filmmaker Matthew Heineman embedded himself with a Mexican drug cartel for his visceral documentary “Cartel Land.” His follow-up, “City of Ghosts,” documented the bloody struggle of Syrian journalists to share information and images from their home, besieged by ISIS. So it’s no surprise Heineman’s first narrative feature would be the biopic “A Private War,” about the life and work of Sunday Times war correspondent Marie Colvin, who died in Syria in 2012, exploring the burden on journalists to bear witness.

Arash Amel adapts Marie Brenner’s posthumous Vanity Fair profile of Colvin, and Rosamund Pike, a character actor in the form of Grace Kelly, has modified her voice, face and posture to embody the grizzled reporter. She’s a boilerplate hard-charging lady journalist — heavy-drinking, chain-smoking, competitive and tougher than any man. She charms dictators, fights to write about the effect of war on civilians, and with her black eye patch (the result of a grenade in Sri Lanka), cuts a striking figure.

Enabled by her editor, Sean (Tom Hollander), the brash American reporter in London returns to the thrill of the chase, the high of the scoop, the adrenaline rush of the war theater like an addict returns to their drug of choice. Despite the accolades, the work takes a searing toll on Marie’s life.

An early scene illustrates what we need to know about the Marie of the film. Recovering in a Sri Lankan hospital bed, her left eye destroyed, she fights off a nurse and scrambles for her recorder and notebook. There are stories to tell and copy to file, even soaked in her own blood. The unrelenting Marie and her photographer, Paul (Jamie Dornan), are less fully-realized characters than they are vehicles for the thesis of the film. We only get the quick hits of their backgrounds, because it’s not necessarily about who they are as people, but what they have adopted as their purpose — seeing, recording, transcribing, telling.

“Let me tell your story” is Marie’s constant refrain. “A Private War” is her story, bedeviled by the question of why she returns to the thing that destroys her body and psyche with bombs, booze and bloody imagery. It must be cathartic for Heineman to explore that impulse, to dig deep into the psychological trenches of the war correspondent and dredge out all the darkness, especially with such a legend as Colvin.

It’s clear Heineman knows the ins and outs of this world well, and there is an easy verisimilitude in the military briefings, far-flung hotel lobbies and fancy press awards dinners. He has legendary director of photography Robert Richardson behind the lens, and the world they create of long, slow takes juxtaposed with jittery handheld, is one where Marie is always at war.

The portrait, as dark and often troubling as it is, is a tribute to war correspondents who push past fear to tell stories. While the reporters collect records of the human cost of war, “A Private War” looks at the human cost on these storytellers. Marie was called to bear witness, and what made her a legend, and what perhaps cost her life, was both her boldness and her humanity as a reporter. “A Private War” never lets you forget this woman contained both in spades. They certainly don’t make them like her anymore.