Can the power of a song make you vote? Chance the Rapper, Taylor Swift and other pop stars think so 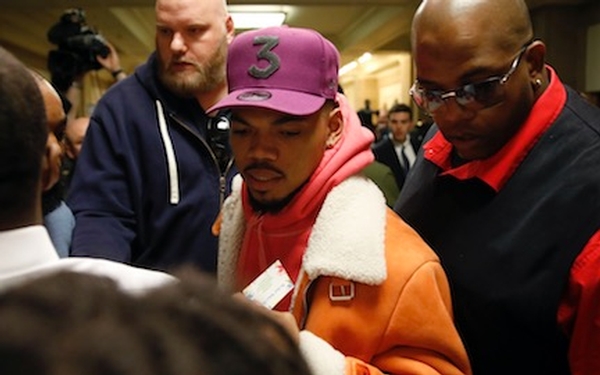 It has been a tumultuous couple of years in music, with a flood of recordings and statements pouring out from artists across a range of genres, from hip-hop to country, addressing hot-button political issues. The price can be steep for artists who speak out, but they are nonetheless weighing in amid a rising tide of anger over immigration policies, racial violence, sexual assault, LBGQT rights and the direction of the country itself.

In recent weeks, Chance the Rapper has endorsed a Chicago mayoral candidate, Rihanna has reportedly turned down an invitation to play the Super Bowl in support of NFL players protesting racist violence, and Bruce Springsteen has contributed a song to an ad supporting women political candidates.

Even Taylor Swift, who has been conspicuously absent from speaking out on any political matters in the past, has endorsed a Democratic candidate for Congress in Tennessee, and drawn criticism from President Trump.

Protest music or political statements by entertainers can’t necessarily be counted on to swing votes. But artists like Swift and Chance the Rapper are clearly hoping to do just that, as they speak to a fan base that intersects with 75 million millennials. Only one-third of that generation voted in the 2016 presidential election. That same year, voter turnout dipped to its lowest point in two decades, with only 55 percent of voting-age citizens going to the polls. So ostensibly the increased political engagement of artists may not only alert some of their fans to the importance of the upcoming election, but may even prompt some of those previously politically indifferent followers to actually cast a vote.

Or as Chance the Rapper predicted last week when he endorsed a little-known candidate, community activist Amara Enyia, for Chicago mayor. “We will see the largest 18-25 (year-old) voter turnout in Chicago history.”

“This is not your typical flash-in-the-pan endorsement,” Enyia said. The mayoral hopeful said Chance would campaign with her because of their mutual interest in helping Chicago’s mental health and educational institutions. The endorsement has already born dividends. Records show that Kanye West, with whom Chance is working on a new album, contributed $73,540 to Enyia’s campaign to help pay off fines associated with her 2015 mayoral run.

In recent years Chance, aka Chancellor Bennett, has become nearly as well known for his civic activism, including a $1 million contribution to Chicago Public Schools and a charity concert for the Special Olympics, as he is his music. In many ways, he has become a leading example of a millennial artist who does not separate his responsibilities as a citizen and an activist from his music.

“In one sense an artist has to be aware of their influence and how it can affect people, and how it can affect people that might be more affected by it than you are,” Chance said in a wide-ranging Tribune interview a few months ago. “I think that a lot of the world needs to understand there is no separation between people and celebrities. Some people also happen to be celebrities, and they’re allowed to have an opinion. There is no hierarchy of value on that opinion. You shouldn’t be weirded out when a celebrity has an opinion, and you shouldn’t agree with that opinion just because the person expressing it is a celebrity.”

Chance’s activism extends a long-standing tradition of Chicago artists who carried political messages in their activities on and off stage, including Curtis Mayfield, the Staple Singers and Common, among many others.

West also has drawn attention — and no small amount of criticism — for his political outspokenness. His recent visit to the White House enraged many of his fans when West affirmed his support of Trump: “If he don’t look good, we don’t look good.” Trump in turn said West “very well could be” a future presidential candidate.

The president spoke less favorably about another artist who recently zoomed onto his radar when Swift, a Tennessee native, broke her long-standing silence on all things political and endorsed Phil Bredesen, the Democratic candidate in a Tennessee congressional race, to her 112 million Instagram followers.

When asked about Swift’s announcement, Trump said he liked her music “25 percent less.”

Undaunted, Swift doubled down a few days after her endorsement by uploading photos to her Instagram account of fans going to the polls in Tennessee for early voting. “I love reading your stories on why voting matters to you,” she commented on one photo.

It was long believed that Swift stayed out of making any sort of political statement in her music or otherwise because she didn’t want to alienate any of her fans. But rather than alienate her fans, her announcement appeared to mobilize them. Within two days of her post, 240,000 new voters were registered nationwide, according to the nonpartisan vote.org site.

If music history is any lesson, the increased political activity by a new generation of musical artists is hardly unexpected. The most tumultuous political eras — the Vietnam and civil-rights struggle of the ‘60s, the Cold War and trickle-down economics of the ‘80s, the post 9-11 invasion of Iraq — tend to bring out the most forcefully political music.

Movements advocating African-American and women’s rights, and speaking out against the policies of the Trump administration, have been transformed into hash-tags — #BlackLivesMatter, #MeToo, #Resist — with their own soundtracks, including popular songs with political themes by Kendrick Lamar (“Alright”), Beyonce (“Formation”), Jay-Z (“The Story of O.J.”), Vic Mensa (“16 Shots”) and Joey Bada$$ (“Land of the Free”), among countless artists.

In a nationally televised performance last year, Eminem mocked President Trump for his policies and then rapped, “Any fan of mine who’s a supporter of his, I’m drawing in the sand a line, you either for or against.” It was a rare instance of an artist not just taking a political stand, but actually dismissing fans who didn’t agree with it.

A few months later, another national televised appearance by a rap artist threw a political punch on “Saturday Night Live,” when Childish Gambino debuted a new song, “This is America,” in which he underlined the themes of the #BlackLivesMatter movement. A video, which has been viewed more than 415 million times on YouTube, made the message even more explicit, as it depicted a country in which the lives of African-Americans are disposable and often rendered invisible or turned into caricatures by media exploiting shock and violence rather than exploring systemic maladies.

Country artists also were moved to speak out in the wake of a mass shooting last year that killed 51 concertgoers at a country festival in Las Vegas. Eric Church and Maren Morris were among the singers who risked alienating their fans by calling for stricter gun laws. Church’s comments in a Rolling Stone cover story brought a torrent of social-media criticism from commentators describing themselves as former fans. “Your music is going in the shredder tonight,” one wrote on Twitter. “Will never … (buy) anything with your name on it again.”

Singer Jason Isbell included a song called “White Man’s World” on his Grammy-winning 2017 album, “The Nashville Sound,” in which he addresses systemic racism through the eyes of a narrator who begins to come to grips with the price of white privilege. Isbell acknowledged that he was taking a commercial risk by diving into the muddy waters of social commentary. But he wasn’t deterred.

“I’m not planning on changing anyone’s mind, but if I’m gonna get anywhere closer to making some kind of impact with these songs, the best way to do it is to say here’s what happened to me, here’s what my experience was like,” he said in an interview soon after the song was released. “Some people who heard this record, who don’t feel the same way I do politically, were saying that he’s going to lose 50 percent of his audience. But if the songs are good enough, people will hang in there with you.”

And some of them, as Chance the Rapper, Swift and other outspoken artists are hoping, may even be motivated to vote on Nov. 6.