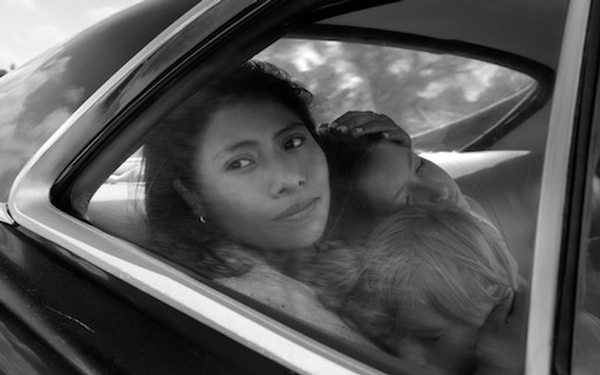 In the latest seismic shift in the ever-evolving landscape of film distribution, Netflix announced Wednesday that it will offer exclusive theatrical engagements for three of its upcoming releases: Alfonso Cuaron’s autobiographical drama “Roma,” the Coen brothers’ Western anthology film “The Ballad of Buster Scruggs” and Susanne Bier’s thriller “Bird Box.”

For Netflix, the decision marks a major break from its long-held commitment to a streaming-centric release in which films debut simultaneously in theaters and via the Netflix service, if they receive a theatrical release at all.

Up to now, Netflix’s adherence to that approach has been seen by some in Hollywood as posing an existential threat to the traditional theatrical film experience — and has perhaps stymied the streaming service in its hopes of earning major Oscar recognition for critically acclaimed titles including “Beasts of No Nation” and “Okja.”

Cuaron’s poetic, black-and-white “Roma,” which has received rapturous reviews on the festival circuit since its debut in August at Venice Film Festival, will have exclusive theatrical engagements beginning Nov. 21 in New York, L.A. and Mexico, with additional locations to follow. The film will be available for streaming on Netflix on Dec. 14 along with an expanded theatrical release in the U.S. and international markets. In total, Netflix says the film will be theatrically released in over 20 territories globally, with 70 mm presentations also planned.

The Coens’ “The Ballad of Buster Scruggs” will have exclusive limited theatrical runs in L.A., New York, San Francisco and London on Nov. 8 before being released via streaming and in theaters in other cities Nov. 16.

Bier’s “Bird Box,” which stars Sandra Bullock, Trevante Rhodes and John Malkovich, will play exclusively in L.A., New York, San Francisco and London on Dec. 13 before being released via streaming and in a wider theatrical release Dec. 21.

For the filmmakers, Netflix’s decision to break from precedent is undoubtedly welcome and is particularly likely to provide a significant boost to the awards prospects for “Roma,” which won the Golden Lion in Venice and is viewed as representing Netflix’s first shot at earning a best picture Oscar nomination.

“The whole idea is trying to get not only a theatrical release but the best theaters possible,” Cuaron told The Times in September at the Telluride Film Festival. “The ideal theaters would be with HDR Dolby projections and with Atmos sound because that’s the ultimate experience to watch the film.”

In recent years, Netflix has made major investments in beefing up its lineup of both original and acquired movies, bringing more major filmmakers — including Martin Scorsese, whose gangster drama, “The Irishman,” is set for release next year — into its fold.

But even as the streaming giant has made a strong push into this year’s fall film festivals, with films like “Roma,” “Buster Scruggs” and Paul Greengrass’ Norway-terror-attack drama “22 July,” questions have lingered about how robust a theatrical push it would give its slate of awards hopefuls.

In an interview with The Times in 2016, Netflix chief content officer Ted Sarandos touted the company’s streaming-centered approach as a boon to many filmmakers whose movies might otherwise struggle to reach a wide audience in theaters alone.

“I think movies are special because of how well they’re crafted, how well they’re acted and shot — not because of the room that you saw them in first,” he said. “I don’t believe it’s sensible to hold back 81 million people from watching a movie so that a couple of hundred people can see it in a theater.”

As the company’s strategy continues to evolve, it remains to be seen to what extent Netflix will offer such exclusive theatrical engagements for other releases. The company has a fully stocked pipeline of movies, but many are smaller-scale projects that are unlikely to stir awards talk and may be deemed by the company to be best suited to at-home viewing. Nor is it certain at this point whether Netflix — which historically does not report box office or viewership figures for its films — will provide such numbers going forward.

The fact is, even as the company makes overtures toward the theatrical experience, filmmakers are increasingly seeing that they also need to adapt to the inexorable changes in the way people are watching movies.

“I’ve got young adult kids, 15 up to 30s, and they all were like, ‘Dad, Netflix is the future,’ “ Greengrass, whose “22 July” hit Netflix and roughly 100 theaters Oct. 10, told The Times earlier this month. “I remember my son, who’s a student, saying, ‘None of my friends will go see this movie in an arthouse cinema. But if it’s on Netflix, they’ll all watch it.’”