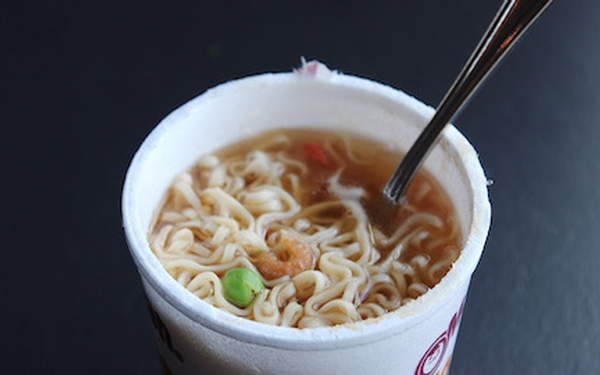 If you want to get to know people, ask them about their favorite instant ramen noodles. Not just the brand, but also how they make them. I asked my colleagues just that, and to bring their best to the Tribune test kitchen. Forget about personality tests, just boil some water.

Once upon a time I had a childhood fantasy of exploring every instant ramen in the noodle-verse. Add hot water, and the flavors of faraway lands materialized magically within a bowl. But as the noodle world expanded exponentially, from the one and only Nissin brand “Chikin” ramen invented by the late, legendary Momofuku Ando in 1958, to now, thousands, the dream became daunting.

Besides, as any hungry college kid can tell you, one noodle packet contains infinite permutations. Add a squeeze of lemon or crack in an egg, and suddenly you’ve transformed famishment to your own personal feast.

What I discovered when my co-workers cooked for me, something we rarely get to do, was that somehow our disparate moments of desperate hunger, for the most part, found strikingly similar saucy, not soupy, final forms. I’m not sure yet what that means. Like tea leaf or coffee grounds, I wonder if noodle bowl readers exist.

Maybe you can tell me. You’ll find here all of our instant ramen noodle cooks telling us about their dish, in their own words. First they share their noodle love story, then how they make it.

Jennifer: My husband and I were living in Massachusetts for a fellowship. We were staying with our good friends, who made it for the kids’ breakfast. We all said, “Why aren’t we all eating this for breakfast?”

I break up the noodles because I have a 2-year-old daughter. I don’t like her to eat long strings of noodles, so I find it more convenient to break them up ahead of time until they’re in little bite sizes.

We have these once or twice a month. My daughter would eat them every day if I let her. The high chair is always painted by the end of the meal. It’s a mess.

Nick: When you go to Joong Boo, there’s like 50 million different kinds of ramen, so you don’t even know where to begin. I kept trying different ones. All of them are so much better than the packet ramen I grew up with, so I always thought it was fun to explore. But when I found these I was like, “I love these.”

I like to add about half a cup of kimchi, which I saute in a pan with butter. I add the noodles with a cup of water and let that cook down. I add only half the seasoning packet because it’s a very aggressively flavored one, so I want to hold back just a little bit because kimchi is so flavorful. In the end, I add a nice slice of American cheese to get it all gooey and melty, with the seaweed packet on top.

There’s a little sweetness to these noodles, which goes really well with the spicy and cheesy.

(The finished dish is a perfect munchies mashup of macaroni and cheese meets stir-fried chow mein, touched with a tang of kimchi. — L.C.)

Bill: I used to see dried shrimp at Asian markets. I thought these are the same shrimp, so these noodles might be more “authentic” and taste better, as opposed to dried chicken, beef or pork.

The preparation is very simple yet encrusted with ritual. (Use) freshly boiling water in a kettle like you would do for tea. Pour into the cup up to the specified line, after you have folded the paper top back in half as instructed. I try to make sure there’s none of the adhesive stuck because I pick up the cup to drink it. Pour the water in. Cook for the requisite time. As soon as the timer’s done, slowly lift off the cover, stir then eat the noodles. Drink the broth at the end.

No doctoring. It’s in a cup, ready to go. I might doctor if I had the cellophane kind.

(The finished cup is straightforward, yet the shrimp actually plump up tenderly. — L.C.)

Grace: My mom is part Indonesian. She found these one day in a grocery store and was really excited because they’re from Indonesia. She made them for me and my dad, and instantaneously they became our family favorite.

I boil water, about 3 to 4 cups, then put all the seasonings in a bowl. When the water’s boiling, I put the noodles in. I’ll fish one out with chopsticks to see if they’re done.

I don’t use a colander because that’s a lot of work. I like that it retains moisture from the pot because it helps mix the dry seasonings. In the past, I’ve used a colander, and it got really gross because the powder got chunky, and I was eating globs.

I pour out the water, then wipe the pot with a paper towel, add a little canola oil to fry an egg until the white sets but yolk stays at maximum runniness. I pile the egg, scallions and hot sauce (on the noodles).

The topping order doesn’t matter because, in the end, I stab the egg a million times, so it breaks into a bunch of pieces, so the yolk gets everywhere.

(The finished dish is slightly sweet, spicy and super savory, eating like bimbimbap with noodles instead of rice. — L.C.)

Joseph: I like this chile and citrus version because it comes with this cute little packet of garlic citrus juice. It’s calamansi, a Filipino lime, which is smaller, brighter and much more floral.

This is not my childhood favorite noodle. It’s my adult one for the last eight or nine years.

Boil the water, about a cup, enough to submerge the noodles and get them loose. Strain. I save about 2 tablespoons of starchy water, kind of like with Italian pasta.

Sometimes you forget how salty these things are, so I add the seasoning packet to taste. But I use the whole soy sauce and calamansi packets. Squeeze in a wedge of lime. Add whatever chile paste is on hand. I add a whole raw egg and stir it all together carbonara-style. Scallions for freshness. More lime and hot sauce on the side, because sometimes you want to eat the meal a little milder, then as you go, add more spice.

Louisa: My Korean-American roommate in Paris, over a decade ago when we were culinary school students together, introduced me to these noodles, the best-selling instant ramen in South Korea.

I start with a medium pot, to minimize the spatter. Pour in peanut oil to coat the bottom. Add about half a cup of kimchi. Turn on the kitchen fan, to minimize the tear gas effect, then blast the heat high.

Half fill a bowl with cold water. When the kimchi sizzles, stir. When it smells like it’s caramelizing, add some water to deglaze the pan, then the powder and vegetable packets plus the noodles. Cook, adding water as needed; these chewier noodles take a little longer. Pour into a bowl.

I also add a crisp sheet of seaweed, torn to bits, and a sprinkling of crunchy roasted edamame too. Twirl a bite, and instantly feel restored. A word of warning, my noodles are not for the faint of heart. It’s an insanely intense spicy and saline bowl designed to defibrillate me back to life.