‘Creed II’ review: Michael B. Jordan’s Adonis orders a White Russian to go — on the MAT! 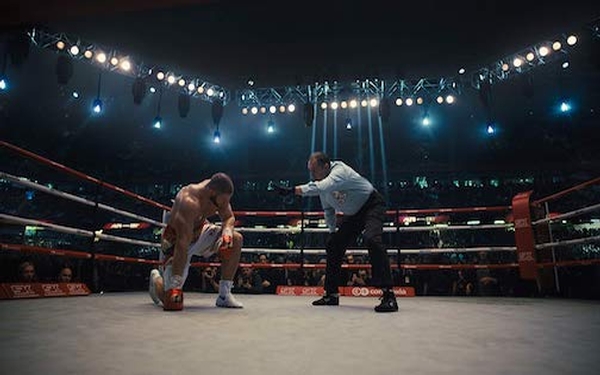 For starters, the way to appreciate the fairly enjoyable, consistently predictable “Creed II” is to acknowledge its superiority to most of the first-round “Rocky” sequels.

Full credit goes to the easy charisma and emotional authenticity of Michael B. Jordan as Adonis, son of the late Apollo, out to avenge his father’s death in the boxing ring; Sylvester Stallone (as Uncle Rocky, lord of the franchise, owner here of the most wind-resistant hair on the planet, and a co-screenwriter, for better or worse); and Tessa Thompson as Adonis’ partner Bianca, maker of music, contender with hearing loss, all-around dreamy Rock of Gibraltar.

Here’s what “Creed II” is. It is directed capably if indistinctly by Steven Caple Jr. His previous feature “The Land” dealt with Cleveland skateboarders with big dreams. It is a direct continuation, 33 years later, of the events laid out with a right hook in “Rocky IV” (1985).

In that picture, Apollo Creed (Carl Weathers) went down, for good, at the fists of doped-up Russian monster Ivan Drago (Dolph Lundgren). Then Rocky Balboa took on Drago for a bloody happy ending, and in the ring in Moscow, Rocky called for glasnost and world peace in an extremely long speech that predated Reagan’s “tear down this wall” by two years.

This time it’s the same, only … the same, more or less. The son of Drago (Lundgren again, and he’s pretty great, actually) is a brute named Viktor (Florian Munteanu, paid by the hungry-bear glare). The match-up can’t lose, publicity-wise: The son of the Drago, who killed Apollo, challenges the Adonis of Apollo, out for his own sequel of revenge.

The first of the two big championships in “Creed II” arrives at the 45-minute mark, which then puts our hero, Adonis, in prime position for soul-searching setbacks. The second match rolls in for the climax. In between, the script by Stallone and Juel Taylor sets up copious, crosscutting training montages and a heap of familial challenges, including a baby; a falling-out between Rocky and Adonis; and some lines that only Stallone could’ve written. (At one point Rocky refers to himself as “a chunk of yesterday.”)

The crucial fact about all things “Rocky”-related, “Creed II” included, is simply this: A lack of cliches would only get in the way.

So here’s what the movie isn’t. It isn’t nearly as bracing and worthwhile as director Ryan Coogler’s “Creed” three years ago. That film nodded to the “Rocky” mythology, and paid proper tribute to Stallone’s self-created myth while taking pains to start fresh with a vital new set of characters.

In “Creed II,” things have changed. Rocky seems to be fighting for co-lead status. The script invents every lame excuse to keep Stallone more centrally prominent in the sequel, which isn’t really to the film’s benefit.

Still: By the end, the movie has become a shameless and, yes, effective ode to fathers and sons everywhere. To wit, and I mean it: Dolph Lundgren in close-up, in various moods of granite determination and unexpected emotional thawing, qualifies as this sequel’s most legit surprise.

MPAA rating: PG-13 (for sports action violence, language, and a scene of sensuality)