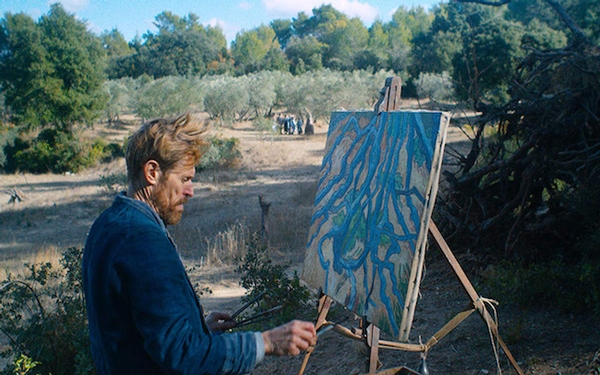 A broken visionary endures a harsh, nearly penniless life, for a while, while making the world a richer place one unfashionable canvas at a time.

With a story like that, it’s no wonder any new film about Vincent van Gogh tends to put moviegoers in a defensive crouch. Yet an improbable number of filmmakers of very different temperaments have successfully envisioned the Dutch Post-Impressionist’s acts of tormented creation on screen.

What did van Gogh see, exactly? We know his subjects; the guesswork or, rather, the creative empathy, comes in imagining the physical and psychological circumstances that gave us the artist’s world-bending output. Some van Gogh screen inquiries seem pretty square today, notably Vincente Minnelli’s “Lust for Life” (1956), though it contains some amazing and rapturous sequences. The list goes on. Paul Cox: “Vincent” (1987). Robert Altman: “Vincent and Theo” (1990), both in miniseries and feature form. Last year (2017) brought the eccentric, stylistically beholden motion-capture animation project “Loving Vincent,” which became a surprising international hit. Those are just the van Gogh movies I’ve seen; there are many more.

Julian Schnabel provides the latest and one of the best with “At Eternity’s Gate,” a fierce, immediate and often inspired response to van Gogh’s life and work.

This is the fifth narrative feature from the painter and filmmaker, focused on the final two years of what van Gogh’s life near the end might’ve been like. Not everything in Schnabel’s film works. But it’s both serious and cinematically vital, with Willem Dafoe’s persuasive, movingly enacted van Gogh doing a great deal of the heavy lifting from the neck up, with his haunted eyes alone.

The title of the screenplay, written by Schnabel, Louise Kugelberg and Jean-Claude Carrière, refers to the painting “Sorrowing Old Man (At Eternity’s Gate),” produced two months before van Gogh’s probable suicide. Schnabel and others dispute that suicide, and posit different circumstances for the painter’s death in 1890 at the age of 37. Dafoe, now 63, may be a generation older than the real van Gogh, but it doesn’t matter. He’s the right, fervent actor for the role, and age in this case becomes irrelevant.

Much of the voiceover narration and dialogue adapts van Gogh’s letters to his patron brother, Theo (Rupert Friend), who championed van Gogh when few others saw the beauty in his hallucinations. “At Eternity’s Gate” begins with a three-word sentence: “Look at me.” Van Gogh spies a shepherdess on the road, and must paint her. He approaches the woman, who regards him (us, that is; the camera takes von Gogh’s point of view) with fear. We return to this moment and those three words later in director Schnabel’s film, so that the portrait of van Gogh becomes an anguished plea for us to recognize one man’s otherworldly talent.

Maybe, van Gogh wonders later, “God made me a painter for people who aren’t born yet.” This comes in his interrogation conducted by an imperious priest (Mads Mikkelsen) charged with judging his mental fitness. Already van Gogh has been committed to an asylum. The great Niels Arestrup memorably plays a fellow inmate; along with these narrative inventions, real-life historical characters are filled by Mathieu Amalric (Dr. Gachet, who cared for van Gogh) and Emmanuelle Seigner (Marie Ginoux, frequent portrait subject and café owner).

Schnabel’s cinematographer Benoit Delhomme shoots much of “At Eternity’s Gate” at a literal trot, running with the camera, creating a hurtling feeling of momentum. It’s probably too much, too self-consciously dizzying in effect. Sporadically Schnabel’s photographically utilizes what’s known as a “split diopter” creating a bifocal effect, blurred in one half, clear in the other, mustard-yellow overall. (Call it “VincentVision.”)

Schnabel’s earlier films about art, artists and risk include “Basquiat” (1996), about the New York street artist, and “Before Night Falls” (2000), on Cuban poet and novelist Reinaldo Arenas. His masterwork, for me, remains “The Diving Bell and the Butterfly” (2007), a brilliantly realized account of how French Elle editor Jean-Dominique Bauby managed to “blink” out a memoir, Morse code style, with his left eye, after a near-fatal car crash left him in near-total paralysis. “At Eternity’s Gate” is a smaller, less flamboyant achievement, but it’s quite something. It sees van Gogh the way he might’ve seen the world around him, threatening and supple. Dafoe never begs for attention or sympathy; he’s there, like the seasoned, craftsmanlike actor he is, as a conduit and a sort of medium.