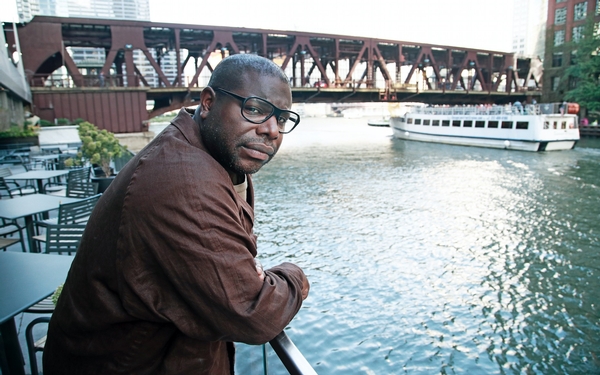 At the beginning of “Widows,” a tightly coiled, blisteringly political crime thriller from British director Steve McQueen, four women bid farewell to their husbands for the last time. Veronica (Viola Davis) lingers in bed with Harry (Liam Neeson) for a few stolen, tender moments. Alice (Elizabeth Debicki) bickers with Florek (Jon Bernthal), her makeup only half concealing the bruise on her face. The happiness-to-misery ratio may vary from marriage to marriage, but each one ends the same way: in a hail of police gunfire and a fiery explosion that burns up four men and $2 million in stolen cash.

Amid all the screeching tires and whizzing bullets, McQueen cuts to an image of Veronica in bed, silently running her hand over the sheet where Harry once lay beside her — a serene moment that sends tremors of feeling through this tense, gripping and fiercely unsentimental movie. Veronica is devastated by Harry’s death, but she has no time for tears. After letting loose a howl of despair — and allowing Davis to confirm her standing as one of the great criers of modern cinema — her face soon hardens into a mask of resolve.

The man Harry and his accomplices robbed, a Chicago crook turned political aspirant named Jamal Manning (Bryan Tyree Henry), gives Veronica one month to pay back the $2 million or join her husband in the grave. She responds by secretly contacting the other three wives — who, like her, turned a conveniently blind eye to their husbands’ work — and proposing that they pull off their own, even bigger heist: a $5-million job that Harry carefully plotted out in his notebook, which is now in Veronica’s possession.

It’s an insanely risky decision that starts to feel saner by the minute. While one of the women, a newly single mom named Amanda (Carrie Coon), declines the offer, the other two, Alice and Linda (Michelle Rodriguez), quickly see how limited their alternatives are. Linda has two kids and runs a clothing shop that’s forced to close when her late husband’s gambling debts come to light. She still has more than Alice, who rents a shabby apartment and, at the insistence of her mom (Jacki Weaver, a virtuoso nag), joins an online escort service catering to the needs of high-powered businessmen.

These aren’t incidental details or simple narrative obstacles to be overcome. They are as crucial to the movie’s texture as, say, Alice’s faint Polish accent, the quinceanera dresses displayed in Linda’s shop and the longtime chauffeur (Garret Dillahunt) whose services Veronica may not be able to afford for much longer.

One of the pleasures of “Widows,” of a piece with its genre smarts and superb performances, is that it’s the rare mainstream studio entertainment to bring its characters’ anxieties about race, class, gender and privilege into the foreground.

The result feels like both a progression and a departure for McQueen, a filmmaker known for the rigorous austerity of his images and the unblinking grimness of his stories.

After the escalating art-house miseries of “Hunger” (2008), “Shame” (2011) and the Oscar-winning “12 Years a Slave” (2013), a crackling heist thriller with a cast of A-list actors at the top of their game might have seemed like a lark by comparison, an excuse to cut loose.

But McQueen isn’t a cut-loose kind of filmmaker, and he can’t help doing even a grand-scale Hollywood entertainment his way. His formalism has relaxed a bit; there’s an easy glide to Sean Bobbitt’s camerawork and a classical fluidity to Joe Walker’s editing. But as taut and twisty and gripping as much of it is, “Widows” never feels like escapism. Like a hard-boiled version of “Ocean’s 8,” with faint echoes of “Set It Off” and “Diabolique,” it turns a contrived B-movie template into a smart and sinewy piece of social realism.

Some of the blueprints have been copied from Lynda La Plante’s 1983-85 British series of the same title, which the screenwriters, McQueen and Gillian Flynn (“Gone Girl,” “Sharp Objects”), have distilled into a swift, supercharged 129 minutes. The result doesn’t entirely avoid a certain schematic tidiness; even summarizing the various arcs and symmetries of the plot can feel like balancing a math equation. But this “Widows,” crucially, feels less like a compression than an acceleration. Its moving parts snap together with terrific urgency, and it packs an astounding wealth of minutiae into every scene.

It also brings us, with remarkable clarity and confidence, into the complicated minefield of Windy City politics. Manning is running to become the first African American alderman of Chicago’s 18th Ward, a goal he pursues with a crew of murderous henchmen led by his brother, Jatemme (Daniel Kaluuya, terrifying). His opponent is the more experienced but equally ruthless Jack Mulligan (a smooth Colin Farrell), whose wealthy family, led by his scowling white-supremacist father (Robert Duvall), has held power over the ward for decades.

Even as McQueen eavesdrops on his candidates’ public speeches and backroom meltdowns, his eye naturally gravitates toward the harder, more intractable dilemmas lurking in the margins of the story. In one extraordinary shot, the camera follows Mulligan’s limousine from a run-down park to the tonier outskirts of the 18th Ward — a visual progression that works in subtle concert with the heated conversation taking place inside the vehicle. (Pay attention to the driver too.)

You suspect that McQueen and Flynn could have written a thoroughly compelling feature focused entirely on the bitter election contest itself. It’s a measure of the movie’s political astuteness that it doesn’t muster much hope or admiration for either the black challenger, a crook styling himself as a man of the people, or the white establishment candidate, who pays lip service to minorities in a community that he shamelessly exploits for his own enrichment.

“Widows” doesn’t muster much hope for men in general, who are always arguing and barking orders when they’re not stabbing and shooting one another in the back. Male power — political, institutional, relational, physical — is shown to be an oppressive force and a banal fact of life. This is true even when it is wielded in ostensible kindness, as when David (Lukas Haas), Alice’s first and only client, decides that his generosity toward this attractive, financially dependent woman should grant him exclusive shareholder privileges.

And so there’s a genuine thrill that surges through the picture whenever it returns to Veronica, Linda and Alice, who are soon joined by Belle (a sharp Cynthia Erivo), the cash-strapped single mom they hire as their getaway driver. The widows’ rebellion, the movie makes clear, is as much against their late spouses as it is against the system that enabled their present circumstances. The heist itself, while unpredictable and exciting when it arrives, feels almost like a bonus — the acid-laced cherry atop an almost too richly layered sociopolitical sundae.

You might chuckle briefly at the sight of a veteran of the “Fast & Furious” franchise pretending to have no clue about how to approach such an assignment, but any past associations are soon swept away by the gratifying subtlety and emotional heft of Rodriguez’s performance. Davis, who carries the picture in a way she has never quite done before, commands every scene with cold, ruthless efficiency; her gravity sells the story’s preposterous premise to the characters as well as the audience. She’s the calm and the storm at the movie’s heart.

The revelation here is Debicki, who gives a breathtakingly funny, pained and nimble turn, touched by a kind of gawky grace, as an often-underestimated woman coming fully into her own. You might flash back to that opening sequence and marvel, with no small satisfaction, that someone used to being slapped around has more than learned how to slap back. Debicki is so good that she even succeeds in stealing one scene out from under Davis’ nose. In Hollywood, that’s what they call grand larceny.

Movie Reviews
With a return to Westerns, ‘Cry Macho’ is a sunset rodeo for Clint Eastwood at 91
29 views

Movie Reviews
A brutal coming-of-age story about the eradication of feeling
1,519 views