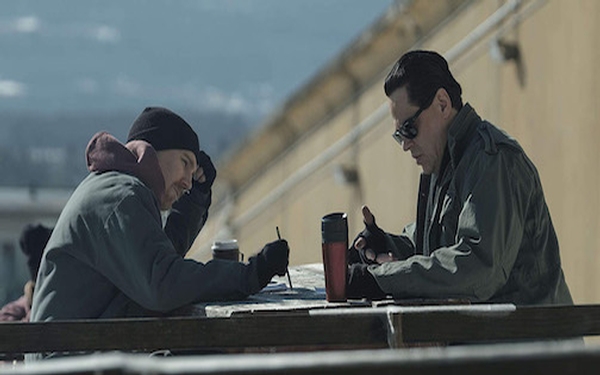 Ben Stiller, director and star of “Zoolander,” “The Secret Life of Walter Mitty” and “Tropic Thunder,” has turned to directing series television with a smart, watchable, elegantly made fact-based drama, “Escape at Dannemora,” beginning Sunday on Showtime. In eight hours it recreates the 2015 incident in which two convicts broke out of an upstate New York prison with the help of a prison employee with whom each was said to have carried on an affair.

Patricia Arquette, shaping her body to the person she portrays, plays Joyce “Tilly” Mitchell, who supervises the tailor shop at the Clinton Correctional Facility, where convicted murderers Richard Matt (Benicio del Toro) and David Sweat (Paul Dano) work. As the series begins, she and Sweat, who knows his way around a sewing machine, are already having sex in the shop storeroom.

Matt is a big man on the cell block, cool and quiet with an artistic streak; Del Toro gives him a kind of only half-calculated courtliness. It is a quiet performance, until events require something … less quiet. He trades paintings with guard Gene Palmer (David Morse) for various favors that help maintain his position; they are as friendly, in their way, as any two people here. During one unexpected spot check, Palmer hustles Matt and his contraband painting materials through a locked door into a space that contains a catwalk that runs behind the cells. In that minute an escape plan is hatched, including Sweat, who occupies the cell next door, and Mitchell, who is sold her own dream of liberation for the price of some smuggled-in hacksaw blades.

One watches the characters’ successes and failures, the creation and deterioration of their partnerships, with what might be called semi-detached but real interest. Though Dano, who memorably played Brian Wilson in the film “Love & Mercy,” has a sweetness that draws you to Sweat.

Although the details of their crimes are held back to keep Matt and Sweat more or less relatable, they are not escaping from a prison more than ordinarily awful, a place so bad that it somehow minimizes their own crimes. The traditional sadistic warden is nowhere in sight — though there is one difficult guard in order to create obstacles and put an antagonist into a story that is otherwise all (anti-heroic) protagonists.

Not every prison getaway story needs to be as long as “Dannemora” — “The Great Escape” got away in just under three hours — but it works here, capturing both the regulated tedium of life behind bars and the sense that breaking out of Clinton was not something that happened quickly, even magically, but was the incremental labor of months, of resources slowly cultivated and barriers chipped away. At times, for contrast, the action proceeds in quick, cross-cutting montages, set to pop music, before shifting back into low gear. (The investigation and manhunt, which lasted three weeks, is compressed into the final, 90-minute episode; that too is the right dramatic choice and comes with the bonus of Bonnie Hunt as New York State Inspector General Catherine Leahy Scott, as she repeatedly introduces herself, and Michael Imperioli as Gov. Andrew Cuomo.

We are watching a movie, always. Its pleasures are deeply cinematic. That it all happened, something like this, with people somewhat like this, feels almost beside the point. Measured but never dull, “Escape from Dannemora” works on its own terms, with no need of the factual justification upon which so many docudramas and biopics lean. (You do get the customary end titles, describing the characters’ subsequent fates.)

Both the writing, by series creators Brett Johnson (“Mad Men”) and Michael Tolkin (“The Player”), and Stiller’s direction forego humor almost completely. With their crooked teeth, bad haircuts, doughy bodies and heavy regional accents, Tilly and her husband, Lyle (Eric Lange), who also works at the prison and can seem something less than perceptive, sometimes verge on comical. (That we regard them as such perhaps says more about us than about them.) But the acting stays clear of caricature; and Arquette, evoking something close to pathos in a self-justifying person who spends a lot of time feeling sorry for herself, is remarkable throughout. Tilly’s aspirations are unequal to her circumstances.

The widescreen production is at times reminiscent of films of the late 1960s and ’70s, a golden age of caper and true-crime films — naturalistic and detailed but very much constructed. Some songs on the soundtrack reach back to the period, while Edward Shearmur’s score, in the earlier episodes at least, brings in some of its signature sounds — harpsichord, jazz flute, electric piano, funk guitar and conga. Stiller and cinematographer Jessica Lee Gagné make extensive use of traveling shots — one that follows Sweat as he rehearses the complicated escape route through the bowels of the prison is particularly impressive — to convey a sense of space and uninterrupted real time. You may feel you know these places pretty well before they let you out.

Rated: TV-MA (may be unsuitable for children under 17)