Here are 9 movies that will be nominated for best film, including a first for Netflix with 'Roma' 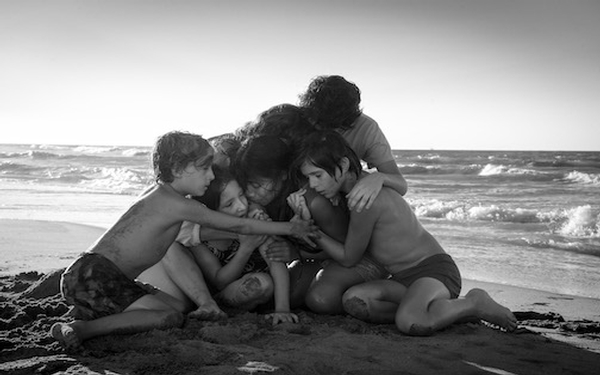 Netflix broke through at the Emmy Awards five years ago when Television Academy voters gave “House of Cards” nine nominations, making it the first streaming program to earn a series nod. Since then, Netflix has racked up 225 Emmy nominations and 43 Emmys and, with its monolithic for-your-consideration promotional spaces, practically redefined television awards campaigning.

The film side has proved trickier for Netflix. Oscar voters have been largely immune to the streamer’s offerings, ignoring titles such as 2015’s “Beasts of No Nation” that other awards season groups embraced. (“Beasts” actor Idris Elba became the first Screen Actors Guild Award winner to not earn an Oscar nomination.)

But let’s also be real here. For all the talk about Academy of Motion Picture Arts and Sciences members viewing Netflix as an existential threat to the theatrical film experience, the streamer has never had a movie that could be marked as a slam-dunk best picture contender. The child soldier story of “Beasts” was emotionally powerful and undeniably tragic. It was also overlong, unfocused and seemed to take a bit too much pleasure in the atrocities it was expertly documenting.

This year, though, Netflix has a movie that not only will likely earn the streamer its first-ever best picture Oscar nomination, it’s a film so good that it could go on to win.

That movie is Alfonso Cuarón’s “Roma,” a glorious, intimate drama that combines the filmmaker’s gift for visual poetry with a story that is delicate, mysterious and full of surprises. At times, the movie, beautifully shot in black and white, feels experimental in its novelistic approach to storytelling and memoir. But for all its formal prowess, “Roma” is fundamentally a movie that elevates the spirit with a generous empathy and love for its characters. In telling the story of the women who raised him, the Oscar-winning Cuarón has made his greatest film.

Film critics groups are going to bow to it. (The movie, produced by Participant Media, already won the Golden Lion prize for best film at the Venice festival.) I’d expect “Roma” to win the top prize from either the New York Film Critics Circle or the Los Angeles Film Critics Assn. Maybe both. That doesn’t happen often, but Richard Linklater’s “Boyhood” was special enough to pull off the feat in 2014.

A win from either group would give “Roma” momentum. More important though, Netflix’s awards season consultants have convinced the company to break precedent and release Cuarón’s film theatrically on Nov. 21, a good three weeks before it will be available for streaming.

That provides “Roma” a window of opportunity to build buzz and assuage academy naysayers who grumble about Netflix’s policy of releasing movies simultaneously in theaters and on its service. It will also provide awards season voters with more opportunities to see the meticulously crafted, 65mm, Dolby Atmos movie in an optimal presentation. (Netflix is also offering early theatrical releases for the Coens’ inspired western anthology “The Ballad of Buster Scruggs” and Susanne Bier’s thriller “Bird Box.”)

“I want this movie to be seen by as many people as possible,” Cuarón told me recently before a guild Q&A we did together for the film. “And Netflix will make that possible. I also appreciate their effort and passion to provide people with the chance to see it in a theater. This was a labor of love.”

It’s impossible to envision a scenario in which “Roma” doesn’t earn a best picture nomination and make history for Netflix. Its chances of winning the Oscar are less certain. It’s a foreign-language movie (Spanish and Mixtec) shot in black-and-white with a cast that will be largely unknown to voters.

Other movies are also likely to find champions among critics groups, namely “The Favourite,” Yorgos Lanthimos’ stinging, subversive costume drama, and “If Beale Street Could Talk,” Barry Jenkins’ follow-up to “Moonlight” that masterfully adapts James Baldwin’s 1974 novel. Spike Lee’s “BlacKkKlansman,” his best movie in years (not including his noteworthy documentaries), could also win a few honors, including long overdue recognition for Lee himself.

Here’s how I’d handicap the best picture race at this early juncture, with the movies ranked based on their likelihood of securing a nomination.

5) “If Beale Street Could Talk”

I’ll stop there as the academy has never nominated more than nine movies since adopting, in 2011, its current, complicated voting system that allows for a variable roster of five to 10 best picture nominees. (Seriously, I think 10 is probably mathematically impossible, but I’m going to keep my slide rule in the drawer for now and not get into it.)

The wild card remains Adam McKay’s sure-to-be-scathing Dick Cheney biopic “Vice,” which screens for journalists for the first time on Saturday. Everyone loves a latecomer barging in and upending awards season absolutes, and “Vice” has the potential to be that spoiler. Or it could be like “Unbroken,” and the song will remain the same. We’ll find out in a couple of days.