‘Ballad of Buster Scruggs’ review: The Coen Brothers order up a Western omelette 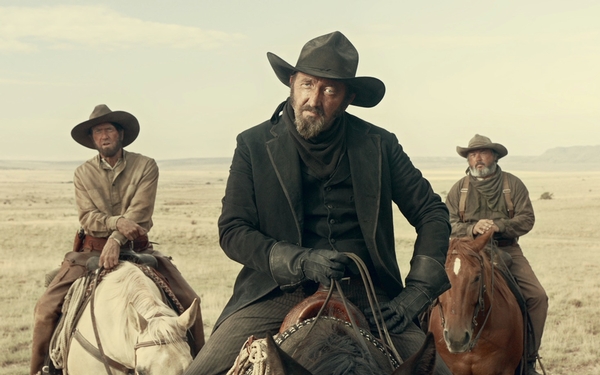 Now we have the Coens’ new Western — six new ones, in fact. Streaming on Netflix starting Friday, “The Ballad of Buster Scruggs” opened in a handful of theaters last week and plays a few more markets starting this week. It’s a strange, grimly comic collection offering many grotesque sight gags, the occasional moment of seriousness and a general wash of melancholic, photogenic, elegiac Old West atmosphere. I liked the least jokey tale the best; by the time it came along, in the fifth-out-of-six slot, I’d had it with the kidding.

The title yarn comes first, and it begins wonderfully. Tim Blake Nelson rides into view with his guitar and his “pleasing baritone” (so says Buster himself). He’s serenading his horse, Dan, and enjoying the canyon’s echoing refrains of the old song “Cool Water.” The joke here’s a clean reversal: All dressed up in nice white hat and a folksy demeanor, Buster seems as innocent as Roy Rogers. Then he starts shooting the fingers off his adversaries.

Is it funny? A little. But the violence veers too close to Tarantino for comfort, or a legitimate payoff.

The first three “Scruggs” tales add up to just over 45 minutes; the second three are nearly twice that length. Death, in one form or another, floats through each story. In “Near Algodones,” James Franco plays a varmint whose hanging is interrupted by flying arrows and scalping Native Americans. “Meal Ticket” presents Liam Neeson in the near-wordless role of an Old West impresario, whose stagecoach converts to a portable stage. His act: an armless, legless thespian (Harry Melling) who falls out of the impresario’s favor in a comically degrading fashion.

The second you see Tom Waits in the fourth installment, “All Gold Canyon,” you realize he should’ve been playing wizened old prospectors his entire non-singing career. The material’s pretty meager, though. Every tale in “The Ballad of Buster Scruggs” runs out of steam before it runs out of story.

Only “The Gal Who Got Rattled” feels fully formed and interestingly shaded, following a wagon train heading west. (The Coens, who wrote, directed and edited, filmed the anthology in Nebraska and New Mexico.) Zoe Kazan pierces the heart as a young woman lovestruck by a sweet, sincere fellow traveler (Bill Heck). With innocents such as these, you know things won’t be working out in Coen Territory. The pathos are heavy yet earned here, and here alone.

From the looks of it, the Coens enjoyed a sizable budget for this project. “Buster Scruggs” involves classical moviemaking techniques (large crowds; spacious and complicated physical elements against real scenery) along with copious digital effects (pistol shots to the head or, more winsomely, the ghost of Scruggs floating up to heaven, strumming a harp). The cast couldn’t be improved: Everyone from Neeson to Chelcie Ross as a gabby, wide-eyed trapper in the final episode, “The Mortal Remains,” comes from central casting in the best possible way.

The material? Buster, there’s the trouble.

‘THE BALLAD OF BUSTER SCRUGGS’