The terrific animated film ‘Spider-Man: Into the Spider-Verse’ opens a whole new web of intrigue 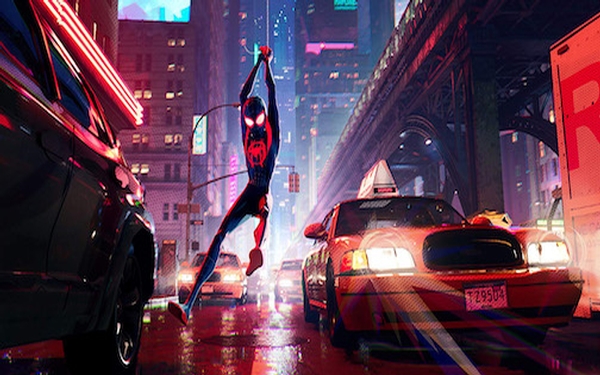 Like any film critic — or perhaps like Bill Maher, hopefully with more tact and better timing — I have done my fair share of obnoxious ranting against a Hollywood culture that finds its most popular expression in the exploits of comic-book superheroes. And believe me, it gives my cold, contrarian heart no joy to acknowledge that, in terms of quality, the Spider-Man movies actually appear to be on the upswing.

This might come as a bit of a surprise, given the steady, enervating pileup of Spidey cinema in recent years, some of it prompted by Sony’s eagerness to hold onto the character amid a complicated, since-resolved rights dispute with Marvel Studios. But as last year’s joint Sony/Marvel outing “Spider-Man: Homecoming” exuberantly reaffirmed, Peter Parker, that nerdy teenager turned skyscraper-hugging crime fighter, remains one of the most renewable action-movie heroes around.

Here to test that theory in an entirely different format is “Spider-Man: Into the Spider-Verse,” an animated action-comedy that shares no corporate or creative DNA with the Marvel Cinematic Universe. On paper, the movie sounds entirely superfluous: It dreams up an entirely new storyline set in a parallel-universe New York and introduces an exhausting cross-dimensional cluster of Spidey-heroes. And to my chagrin, it’s terrific — a quick-witted entertainment, daring and familiar by turns, that also proves to be sweet, serious and irreverent in all the right doses.

Leave it to the reliable comic brain trust of producers Phil Lord and Christopher Miller (“21 Jump Street,” “The Lego Movie”), who, along with a trio of directors (Bob Persichetti, Peter Ramsey and Rodney Rothman), have tackled this project with their usual formula-busting, pretension-puncturing gusto. Happily, all the amiable nonsense that comes pouring out of this movie — my favorite might be the talking pig who goes by Spider-Ham/Peter Porker (he’s Marvel canon, apparently) — is tethered to a boldly imagined origin story with its own potent emotional core.

At the center of that origin story is Miles Morales, a smart Brooklyn teenager and instantly winning creation voiced by Shameik Moore (“Dope”). The New York that Miles inhabits springs to life in images that feel both vividly real and gloriously, proudly cartoonish, combining the vibrant, hyperreal texture of CG animation and the sharp, angular quality of classic comic-book panels. Notably, the city also has its own friendly neighborhood Spider-Man, aka Peter Parker, an enemy of crooks everywhere but also an irritant to strictly by-the-book cops like Miles’ dad, Jefferson (Brian Tyree Henry).

For a while the movie zips absorbingly alongside Miles as he struggles to fit in at an elite prep school, nurtures his skills as a graffiti artist and hangs out with his Uncle Aaron (Mahershala Ali), Jefferson’s estranged brother. Every aspect of Miles’ personality is drawn in such pleasurably absorbing detail, he would make terrific company even if a tiny radioactive eight-legger didn’t eventually show up. And even after he develops cool arachnoid powers and starts learning the ropes from Peter Parker/Spider-Man, it takes him a realistically long time to master them, to figure out how to move and fight effectively while avoiding those sticky-fingered embarrassments in public.

But master them he must. Without giving away too much — though a recent post-credits stinger on “Venom” already did just that — Miles is soon enlisted in the fight against a big, bad villain known as the Kingpin (Liev Schreiber). For pleasingly preposterous reasons, the Kingpin has devised a powerful technology capable of ripping a gash in the space-time continuum and causing a massive multi-dimensional collision, a phenomenon that occasions some wildly trippy colors and glitch-tastic visual effects.

Before long the movie is crawling with various Spider-heroes who have been mysteriously transported from their universes and into this one. I won’t detail all their names, secret aliases and personal powers — well OK, Peni Parker and her Spidey-mecha are pretty cool — except to note that they give excellent actors like Jake Johnson, Hailee Steinfeld, Kimiko Glenn, John Mulaney and Nicolas Cage a chance to shine. They also provide “Into the Spider-Verse” with a clever meta-joke about the endless recyclability — which is to say the disposability — of the Spider-Man franchise, though with none of the smugness that sometimes rears its head when a studio franchise decides to mock itself.

And while there is plenty to mock here — Lord and Rothman’s script gets in some choice digs at Peter Parker’s relationship issues — what distinguishes “Spider-Man: Into the Spider-Verse” in the end is that it takes its mission seriously, even when it’s being transparently silly. There is nothing cheap or snarky about the way the movie festoons its action sequences with “POW!” and “BLAMMO!” word bubbles, or shows us squiggly little lines whenever someone’s Spidey sense tingles. It’s a sign of a movie not just embracing its hand-drawn comic-book roots, but also striving to be the fullest, truest version of itself it can be.

Which is what, in the end, nearly everyone who dons the Spidey mask in this movie is trying to achieve, especially Miles, a young man of Puerto Rican and African American heritage who pointedly doesn’t look like a lot of the young webslingers who have come before him. That creative decision might have felt like a merely tokenistic gesture, of course, if he weren’t such a richly and coherently imagined character in the bargain.

And hopefully not the last. Sony has already announced plans to work on a sequel to “Spider-Man: Into the Spider-Verse” as well as an all-female spin-off, which bespeaks mighty confidence in the new web-slinging worlds they are about to unleash. I’ll cautiously put grumpiness aside, just this once: They’ve earned it.

‘SPIDER-MAN: INTO THE SPIDER-VERSE’