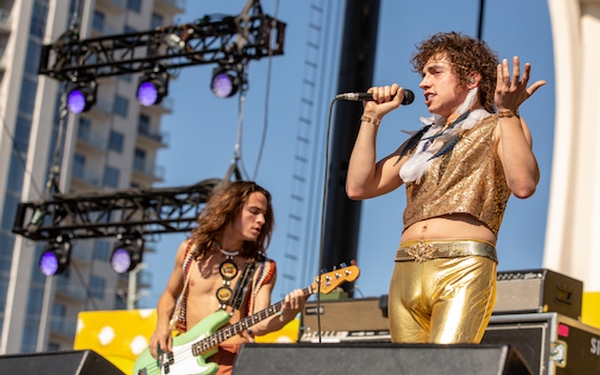 Greta Van Fleet enjoys making music its members like and it shows.

Generation Z’s first major rock band taps into the same spirit of fun and experimentation that the classic rockers of the ’60s like Led Zeppelin and Cream had, the love of playing loud and fast because they can.

“When we’re in the studio, we’re not thinking about what the people will like,” says bassist/keyboardist Sam Kiszka, calling from a tour stop in Birmingham, England. “We make music for ourselves, honestly. We sculpt the album to be the way we want it to be rather than thinking, ‘Well, this might be catchy’ or ‘This may be more effective to grab listeners.’ When we released the album, we thought, ‘Well, here goes nothing.’”

However, Greta Van Fleet’s debut “Anthem of the Peaceful Army” (Lava/Republic) turned out to be much more than the Michigan rockers expected. It topped the rock charts when it was released in October and reached No. 3 on the overall albums charts, while the single “When the Curtain Falls” became the band’s third No. 1 on the rock charts. And the buzz around the quartet — 19-year-old Kiszka, his 22-year-old brothers singer Josh and guitarist Jake, and 19-year-old drummer Danny Wagner — continues to grow, with the band set to play three nights at Terminal 5 in Manhattan on its current tour.

“The high point of this year of very high and very low extremes was releasing the album and seeing the response,” Kiszka says. “Thank God for the current rock and roll climate. It’s very inspiring.”

Greta Van Fleet takes inspiration very seriously. After all, it’s what drove them to become musicians from a very early age, with Kiszka and Wagner signing their record deal while they were still attending Frankenmuth High School.

“That was a strange thing,” says Kiszka, adding that they waited until he was 18 to finalize the deal so that he could sign as a legal adult. “But when you’re in the middle of doing it, it doesn’t really register.”

Kiszka says he was first inspired to take music seriously by Bob Dylan’s “Blood on the Tracks” album.

“I found my dad’s vinyl of it in the basement and ‘Tangled Up in Blue’ blew my mind,” Kiszka says. “The lyricism was incredible. I really wanted to understand that song and I have no idea why. I was only 11 or 12 but I really took the time to understand that song. From then on, I was always in the basement, usually with Jake, and we would sit and listen to Bob Dylan while we would paint and draw. There is just something about Bob Dylan. He is the most phenomenal and that really inspired us to think about music.”

Soon, the Kiszka brothers had started a band and would play in their garage for their friends. “People would start coming over to hang out and listen to us screw around in the garage,” Kiszka says. “It was just a second nature kind of thing. Everybody was just playing guitar and that’s what started us wanting to be musicians … I have very fond memories of those times.”

Kiszka said that was when he and his brothers began to understand the power of music.

“Music is a very special thing,” he says. “You can wield a paintbrush or camera and create great art, but music just touches something in everybody.”

And even though “Anthem of the Peaceful Army” is only Greta Van Fleet’s debut, the band is already determined to make the most of their music’s power.

“I am obsessed with the story an album can tell,” Kiszka says. “We worked very hard on the track listing, making sure all of the story is in there.”

When the band was recording in February, it was reacting to “whatever turmoil had plagued a certain country,” which led to the opener “Age of Man,” where they wonder “Who is the wiser to help us steer? And will we know when the end is near?”

“That’s the feeling of where we were at the time, the emotions were that intense,” says Kiszka, adding that by the album closer “Anthem” is a call for unity, where they sing, “Can we step back and see we want the same?”

That kind of ambition, as well as the band’s virtuoso playing and Josh Kiszka’s wailing vocals, have made them plenty of fans already, landing them on Forbes’ “30 Under 30” list for “bringing back good old-fashioned rock ‘n’ roll” and on a lot of shortlists for a Best New Artist Grammy nomination.

Deep Purple bassist Roger Glover recently told MB Live, “A band like Rival Sons or Greta Van Fleet, if they were back in the ’70s, they’d be huge — top of the charts everywhere … But it’s a different world. It’s now a world of streaming and a world of likes.”

Kiszka says Greta Van Fleet isn’t really worried about that world. “There are three trillion other things that rock bands focus on other than music, silly kind of music industry things,” he says. “All we care about is playing live shows and fan engagement. For us, talking to our fans is what social media is for. It’s not for posting pictures of you wearing expensive shoes.”