Seeking the wild side of Maui? Easy, it’s everywhere 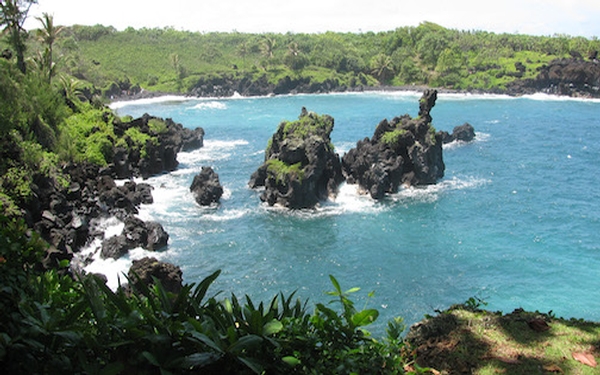 I wanted to find wild Maui, so naturally, I piled my family into a rental car for a five-hour drive on a narrow road with single-lane bridges and curves so sharp that I sometimes lost sight of the pavement — and oncoming cars. Horns and brakes get a workout on this roadway. Knuckles turn white. And, still, I decided that it was our path to paradise, remote Maui where Hawaiians outnumber haoles (aka mainlanders), horses graze on oceanside pastures and the landscape drips with verdant beauty.

Our destination, the tiny town of Hana, was all that. Especially the dripping part.

One day, five inches of rain fell in an hour. We learned online that some sections of the highway we had braved — the legendary Road to Hana — had closed. I could think of worse places to be stranded. But we were on Day Three of our winter escape and had not yet seen the sun. We had swum in a pool overlooking the Pacific, strolled a black-sand beach, climbed a nearby peak — and also reached for rain gear, a lot. The Seven Sacred Pools in Haleakala National Park, where we hiked on red-mud paths, appeared as one big gushing waterfall, the distinct pools drowned. Sunglasses remained tucked in our bags.

The day after the deluge, we high-tailed it to the more populous and, we hoped, sunny side of the island. We were ready to trade wild Maui for better weather. But we soon discovered that we hadn’t left rugged scenes and near-empty beaches behind. They were all around us.

Sure, during our drive from Hana to Kaanapali, we hit stop-and-go traffic in Paia, a surfer town, and again in Lahaina, where we inched our way past its busy chain grocery stores and oceanside downtown filled with T-shirt shops and restaurants. Yes, hotels with intensely manicured lawns line the shores of West Maui. But this side of the island — where sunshine generally rules and tourists flock — holds authentic, quiet, untrampled pockets, too. And we had found one that very night, Slaughterhouse Beach.

Just 10 minutes after leaving our condo, we parked the car on the highway shoulder, where a small blue sign was our only clue that we had found the beach; it noted that the area is part of a marine life conservation district. We climbed down steep stairs and over thick tree roots to a small cove, where the only other group appeared to be Native Hawaiians. Jagged rocks dotted the sands. Towering lava cliffs hugged the beach. We watched as turquoise waves curled and crashed.

Clouds hovered, but rain rarely fell during the next seven days. We happened to be in Maui during an unusually wet winter. But on this leeward side of the island, volcanic peaks generally hold clouds on the far side, where our trip began.

“So sad, all this rain. Very unusual,” the receptionist at our Hana resort lamented. In the open-air lobby, she handed out umbrellas and sympathy.

Nearby, a list of the day’s activities was pinned to a bulletin board. Horseback riding: canceled. Outrigger canoeing on Hana Bay: canceled.

Undeterred, we put on raincoats and set off for a hike in the Dr. Seuss-like, almost psyche­delically green Waianapanapa State Park. We crossed its black-sand beach and followed an ancient coastal trail across volcanic rock hosting a riot of growth. We were so taken with the park’s strange craggy charms that we almost failed to notice we were wet.

We took the Road to Hana — this time beyond the town, where it grows recklessly narrow and passes the churchyard where Charles Lindbergh is buried — to lush Haleakala National Park.

For lunch in town, we walked to the Thai food truck and ate delicious concoctions at picnic tables under a tent, where a lazy dog hoped for scraps.

We even put on swimsuits; then, quickly, sweatshirts over them. At the pool, we had our pick of lounge chairs. We toweled them dry, sat down but soon hopped in the empty pool and settled in the hot tub.

Two friendly middle-aged women — yoga instructors from Lahaina — joined us. One looked at the swirling steam rising from the warm water and spoke of aliens among us; we can’t see them because they occupy a different dimension, she explained. Then she turned our attention to something grounded in our world. Motioning to the ocean roiling with whitecaps, she said, “Such force and power. There’s nothing but ocean between us and South America.”

I checked a map later. She would be right — on the geographic claim — if it weren’t for Mexico, the first land mass east of Hana. No way to verify the aliens.

One morning, we chartered a whale-watching sail on the Scotch Mist, which we boarded at Lahaina Harbor.

Our captain and his skipper looked like bandits, their faces covered to their sunglasses with neck gaiters. “You can’t put on enough sunscreen when you’re on the water all day,” the skipper told me. We were just happy to see the sun.

Soon, we were gliding out to sea on a gentle breeze, black giants tantalizing us in the distance.

A mother and calf appeared, rising to the surface and flipping tails. The baby breached several times, jumping from the water and slamming back down. Then came the real close encounter.

The captain pleaded with a humpback to spare the boat’s keel, a shaft that goes deep below the sailboat. The rest of us peered over the sides in awe as a 40-foot-long behemoth descended below the water on port and reappeared on starboard. An escort — a male who accompanies a mother and her baby to ward off predators — had come to spy on us, just as we were spying on him.

The ukulele music pouring from the sound system may have intrigued the whale, or maybe it was the sailboat’s rounded wooden hull. One thing is clear: He kept his distance from the other sightseeing boats on the water, metal monsters with vibrating motors.

In Maui, boats are forbidden from approaching within 100 yards of humpback whales. Of course, they can come to us.

Our visit from the whale was a highlight of the vacation, but we had daily brushes with natural wonders.

We saw few other hikers during a windblown walk on the Kapalua Coastal Trail.

On a blustery day, we watched a lone windsurfer jump waves from our perch at wide-open Oneloa Beach.

On several occasions, we snorkeled at Honolua Bay, marveling at the abundance of fish; the waters are part of the same marine life conservation district as Slaughterhouse Beach. Across the street, beside a creek, we ate curries and acai bowls from a food truck staffed by cheerful, tattooed millennials.

The day we wound our way to the Nakalele Blowhole, we got a sober reminder of how the astounding can turn ugly. Near the parking lot stood makeshift memorials for people who have lost their lives by falling into the hole or getting hit by a wave on the low-lying lava coast. We hiked down, but kept a careful distance as ocean waters burst skyward like a geyser. Lava rocks on the hillside were pitted by the periodic beating of saltwater.

On one of our last days on Maui, we headed to Napili Bay, which, like all of the places we visited on this side of the island, was not far from where we stayed. Napili is known for its coral reef and colorful fish. We’d arrived before lunch, and already the beach was crowded with visitors and their snorkeling gear. We squeezed our towels onto the sand and headed to the water, where face down, we spotted bright yellow tangs, languid sea turtles and other creatures, including occasional fellow snorkelers.

In that crowded bay, nature bit back.

My arm began to tingle and on shore, I discovered I’d been brushed by the tentacles of a jellyfish.

Fortunately, saltwater can tamp down the sting. We headed to Slaughterhouse for one last dive into its fierce waves. As the ocean washed over me, the welts on my arm went away, the burn subsided and the pervasive wilds of Maui proved their powers again.