For The Record Presents - "Love, Actually Live" at The Wallis (Through Dec. 31st) 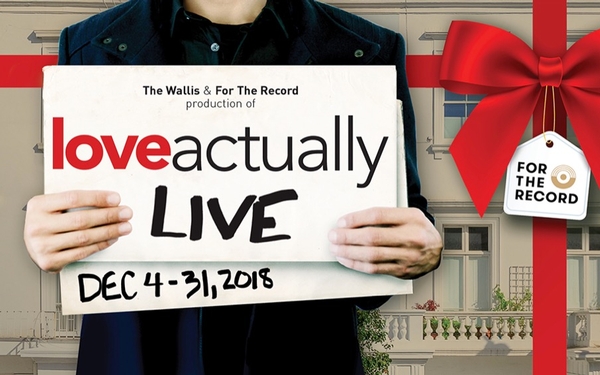 Love Actually Live, a multimedia-concert celebration of the soundtrack to one of the most beloved holiday movies of all time from the team behind Los Angeles’ award-winning For The Record series, is playing at the Wallis Annenberg Center for the Performing through Monday, December 31, 2018. Co-Produced by the Wallis Annenberg Center for Performing Arts, Shane Scheel and Siobhan O’Neill and inspired by the Universal Pictures/Working Title motion picture written by Richard Curtis, this world-premiere production, presented by special arrangement with Universal Theatrical Group, transforms The Wallis’ Bram Goldsmith Theater into a giant, immersive, cinema for the modern day. The production, a one-of-a-kind presentation is performed live by an all-star cast and 15-piece orchestra, includes songs from the hit film, including “Christmas Is All Around,” “The Trouble with Love Is,” and “Both Sides Now.”

“I couldn’t be more excited to have so many For The Record alumni back with us this year, to bring Love Actually to life,” says executive producer Shane Scheel. “Every song on the Love Actually soundtrack helps tell the story of this beloved holiday movie, and the vocalists comprising this company will bring joy, tears, and adoration to audiences nightly.”

Love Actually Live takes place in a three-dimensional world where scenery and video screens intertwine, providing a canvas upon which actors weave between projections as they bring unforgettable scenes to life through the movie’s album. The film, along with original custom-video content illustrating the London-based setting, is displayed on screens that travel throughout the stage, immersing the singers and musicians in a cinematic spectacle. This theatrical world transforms the experience so completely that audiences will fall in love with Love Actually all over again.

“Each year, The Wallis builds upon its commitment to developing lasting relationships with companies like For the Record,” says artistic director Paul Crewes, “and we value our long-term connection as we take this season’s world-premiere production of Love Actually Live into the next phase of its development.” Previous For The Record productions at The Wallis include the sold-out Tarantino, a rock-’n’-roll celebration of the famed filmmaker’s cinematic universe, and the Ovation Award-winning Scorsese: American Crime Requiem.

Written and directed by Academy Award® nominee Richard Curtis (About Time, Bridget Jones's Diary and Notting Hill), Love Actually is the unforgettable holiday classic from Universal Pictures/Working Title that has had audiences laughing, crying and hugging since it first premiered in the U.S. in 2003. Hugh Grant, Liam Neeson, Colin Firth, Laura Linney, Keira Knightley, Emma Thompson, Martin Freeman, Andrew Lincoln and Bill Nighy lead an illustrious all-star cast that charm and delight in this heartwarming romantic comedy about eight couples whose lives intersect shortly before the holidays. The film's hilariously unpredictable plot examines how love inspires experiences that are alternately exciting, unexpected and unequalled. Since its debut 15 years ago, Love Actually has become a new holiday classic, and according to Entertainment Weekly, “one of the great Christmas movies” of all time.