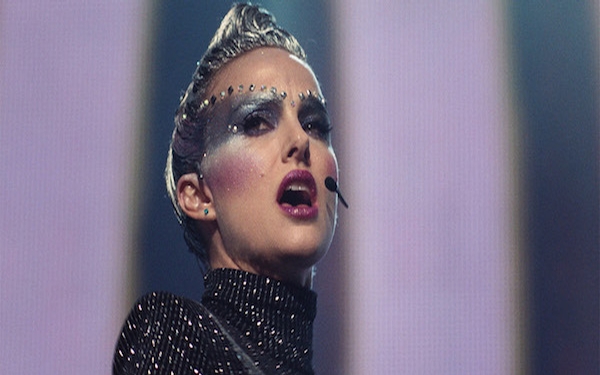 “Vox Lux” is a movie full of big ideas. So big and so full, in fact, that the movie requires a secondary title, “A 21st Century Portrait.”

Meaning, it is both a portrait of a character from the era and, in many ways, a portrait of our no longer quite so young century.

Written and directed by Brady Corbet, the movie opens in 1999 with a mass school shooting. A teenage girl wounded in the attack, Celeste (Raffey Cassidy), sings a song at a vigil that puts her on the path to fame. Jumping to 2017, adult Celeste (Natalie Portman) is a turbulent global pop star shaken by news of a terrorist attack in Europe in which the assailants wore masks similar to those in one of her music videos. With her longtime manager (Jude Law), sister/minder Eleanor (Stacy Martin) and teenage daughter Albertine (also played by Cassidy) all in tow, Celeste attempts to relaunch her career with a big show in her hometown.

In taking on pop stardom, gun violence and world events, “Vox Lux” looks to bring together untethered strands of culture and politics. It’s a film aiming for the heart of right now.

“I think this film certainly has a lot of echoes in terms of the time we’re living in,” said Portman, sitting with Corbet in a hotel suite in Beverly Hills.

“It is a very unstable time with rapidly changing technology, rapidly changing media and culture, and it definitely affects us,” she said. “This has that aura of the moment we live in, in a way that I don’t feel like I’ve ever worked on before in a film.”

Celeste’s music in the film is co-written by pop songstress Sia, including the plaintive ballad “Wrapped Up,” which launches Celeste to her first acclaim, and the glam-pop disclosures of “Private Girl,” with its chorus of “I’m a private girl in a public world.” The movie’s score was composed by Scott Walker, a pop star in his own right in the ’60s and ’70s before he turned to more rigorous, avant-garde work.

Corbet, 30, has one of the more curious resumes in contemporary cinema. As a teenager, he appeared as an actor in Catherine Hardwick’s “Thirteen,” Jonathan Frakes’ “Thunderbirds” and Gregg Araki’s “Mysterious Skin.” Among his other acting credits are Michael Haneke’s English-language remake of his own “Funny Games,” Antonio Campos’ “Simon Killer,” which Corbet co-wrote, Olivier Assayas’ “Clouds of Sils Maria” and Ruben Östlund’s “Force Majeur.”

Corbet’s debut as a feature filmmaker was 2015’s “The Childhood of a Leader,” another fictionalized take on history that examined the rise of fascism between the two world wars. He says the essayistic bold takes of his movies are in some way their purpose.

“I actually am finding it more and more difficult to write drama because I don’t know how to make audiences invested in literally anything,” Corbet said, “And maybe that’s a bit dramatic, but it’s not too far off because I do find that nothing shocks us anymore.

“And I think that we actually have to reach for bigger ideas in order to move anyone, because we’re all just so accustomed to seeing the same thing over and over and over again,” said Corbet. “It’s rare that something really shoots for the moon. And since things are so tough right now, we should really attempt to try and make stories better and be bolder.”

“Vox Lux,” which features a droll voice-over narration from Willem Dafoe, often feels as if it should come with an attached syllabus or some form of map for the dense thicket of allusions and references created by Corbet and his collaborators.

Portman noted that the way she exaggeratedly works a lozenge in her mouth during a contentious press interview was inspired by Madonna in her tour documentary “Madonna: Truth or Dare.” Corbet in a single answer managed to use both Robert Musil’s 1940s modernist novel “A Man Without Qualities” and Jonathan Demme’s 2016 concert film “Justin Timberlake + the Tennessee Kids” to illustrate a point.

Production began in February and the movie was shot in 22 days, with Portman shooting for 10 days. The film’s climactic concert sequence was shot in only a day and a half. The full-scale stage set for Celeste’s homecoming show was created just for the film on a soundstage in Portman’s own hometown of Syosset, N.Y..

Law, playing a character known simply as “The Manager,” shepherds young Celeste on her way up the ladder of stardom only to become trapped by the machinery of the industrial-celebrity complex just as she does. Law’s performance might be two-parts sleazy and besotted, one-part sympathetic and protective. (Or maybe the other way around.)

“He’s committed and he’s loyal and I think he’s decent early on,” Law said recently, on the phone while stuck in London traffic. “And then by the time you jump forward, when Celeste has become a brand, he’s as much a part of that as she is, as the sister is, and there’s a co-dependency. He’s the pimp, he’s the prostitute, he’s the dealer and the junkie all rolled into one. And weirdly I also think he’s the only one left who’s got her back and understands her.

“So it’s convoluted, it’s complicated, and I don’t know that I understand it all myself,” he said of the dynamic.

While the screwball sass of Portman’s performance as the older, superstar Celeste gives the movie some necessary fizz, it is Cassidy’s turn as young, wounded Celeste that provides it with much of its initial heart and sense of emotional grounding.

For Cassidy, switching from young Celeste to playing Celeste’s daughter Albertine made an odd sort of sense.

“I think Albertine and Celeste have a connection, I think it’s important that they feel the same things when they’re younger,” Cassidy during a phone call while in Los Angeles, where she attended the motion picture academy’s Governors Awards. “Celeste, her innocence is taken away from her, and that also happens with Albertine. She’s forced to grow up.”

“The physical manifestation of what Raffey did was so was so strong, it was almost like a different actress and I was really shocked,” said Martin on the phone from Budapest, where she was shooting a movie. “I sort of had my vision of Raffey and what she was playing and then had to reassess everything because she metamorphized herself completely. It made sense and it was really strange because she suddenly became Albertine.”

“Vox Lux” first premiered in Venice and then went on to the Toronto International Film Festival, just like another 2018 release dealing with contemporary pop stardom and its repercussions: “A Star Is Born.” While the Lady Gaga-Bradley Cooper drama became a surprise box office mega-hit and “Vox Lux” is only now entering arthouse theaters, comparisons in film circles have been inevitable.

Both Portman and Corbet said they had seen (and liked) “A Star Is Born” and welcome the connection. The films even share small details, such as scenes of a rising ingenue learning how to sing and perform dance choreography or a bit of business about not knowing who has the key to a star’s luxurious hotel suite.

“They’re obviously such different films,” said Portman. “There are probably more differences than similarities dealing with the same subject matter.”

“I’m happy that all of these music-driven films have come out at the same time,” said Corbet. “I think it’s interesting and everybody has a very, very different story to tell. I mean we use those cliches and sort of subvert them and (‘A Star Is Born’) plays with them but in a very self-aware way. I understand why people like it so much.”