1st-time Grammy nom H.E.R. on female representation in major categories: ‘We took our power back' 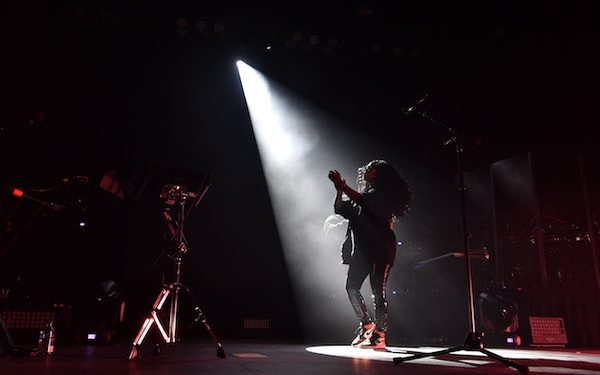 Recording artist H.E.R. performs onstage during her "I Used To Know Her" tour at Coca Cola Roxy on Nov. 10, 2018 in Atlanta, Ga. (Paras Griffin/Getty Images/TNS)

H.E.R. was in a bit of a panic when her manager texted with an urgent request.

The rising R&B sensation is on the road and battling a nasty cold that just won’t go away — a pitfall of singing to sold-out crowds in the dead of winter — when her phone buzzed at the crack of dawn. An emergency meeting had been called for the team at their hotel Friday morning.

“He said we might have to cancel this tour because I’ve been a little sick. That’s the last thing I wanted to hear, so I was anticipating this horrible news,” the 21-year-old recalled.

Actually, it was all a ruse to get H.E.R. (real name: Gabi Wilson) and the crew together to announce that the singer-songwriter had scored five Grammy nominations. Among her nods were new artist as well as the night’s biggest prize, album of the year, for her self-titled compilation that fused her debut EPs with new records.

“Everyone was going crazy and crying; it was unreal,” she said over the phone shortly after nominations were unveiled this morning — the sounds of reveling coming in clear over the line.

H.E.R.’s first Grammy nominations are the result of the young star’s meteoric rise over the past year and a half as the brooding, slow-dripping soul she began releasing anonymously in 2016 caught fire on streaming platforms and solidified her status as one of the most exciting R&B voices to arrive in recent years.

Her records have been streamed over 1 billion times, she’s got fans in Janet Jackson and Rihanna, is in the middle of her second headlining tour and is part of a seismic shift that has pushed the genre out of the shadows of hip-hop.

Q: Last year you made the decision not to submit yourself to the Grammys, which your fans didn’t quite understand.

A: It just didn’t feel like the right timing. I hadn’t had an official project out. I didn’t have the BET Awards performance or many performances where people could see my artistry as a whole. They only had a little bit of music. So I wanted to wait. I thought I needed to prove myself more. This year, I didn’t feel super deserving, but I’ve had so much success in the past two years. My sold-out tours. Winning at the Soul Train Awards [for album/mixtape of the year]. I thought, “Let’s submit and see what happens” and we decided to go for it.

Q: You’re up for album of the year and new artist. Both categories are dominated by women, which is amazing, but even more massive is the fact that you’re not the sole R&B artist competing in either race.

A: It really is more empowering than anything. After all of the controversy from last year’s awards and feeling like women didn’t get any recognition, this year it’s like we took it back. We took our power back. People are being recognized for their artistry — and not the hits they have. There was no choice but to pay mind to what’s happening, and that feels really good to be a part of.

Q: Being a Grammy-nominated artist can be career changing on its own. What do you hope your nominations signify for R&B moving forward?

A: Wow, I don’t know. I think R&B is in a good place right now. It’s more honest. People are singing on their records now. I hope this moment R&B is having will pave the way for real singers — especially black singers doing soul music. We are at a time when people are making timeless music again, the way our legends did. We’ve lost our greats like Aretha [Franklin] and Prince, but what they left was music that will always be relevant. That’s what it needs to be about.

R&B is that genre that will never leave. It will never die. It’s rhythm and blues, simply put. I think artists need to have that mentality of longevity. I know I want to make timeless music, that’s what I’m trying to do. It’s not about what’s hot today — it’s about music that will affect my kids and my kids’ kids. For me, that’s the bigger picture and that’s what I’m focused on with what I do. And the nominations this year reflect that it’s about the bigger picture and music that makes people feel something.

Q: How are you going to celebrate?

A: Well, first I’m on my way to the doctor to try to get better before my next shows. Maybe I’ll go out to dinner with my team. Or maybe I’ll just chill today. But first, I’m thanking God.