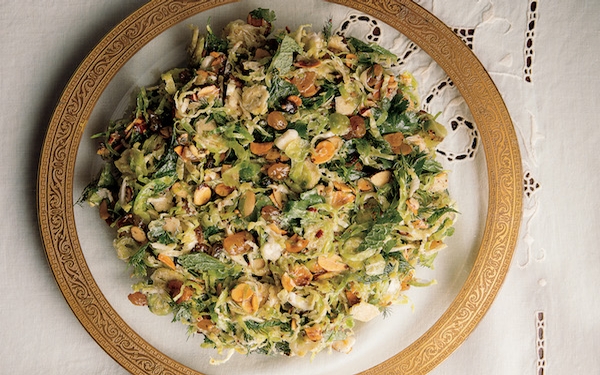 Restaurant folks produce some of the most compelling cookbooks, and this year’s bumper crop is no exception. Let the gift-giving begin, but don’t overlook your own kitchen library.

Richards is a natural writer (“Once you familiarize yourself with the nuances of the wide variety of onions, you realize that their unique flavors and textures tell you how to use them” is a tiny example) and his emphasis on produce — corn, tomatoes, melons, berries and stone fruits — makes this celebration of Southern cooking an ideal summer-in-Minnesota resource.

There can never be too many Italian cookbooks, right? Another to add to the pile is “Bestia” (Ten Speed Press, 328 pages, $35), which showcases the rustic Italian fare at this wildly popular Los Angeles restaurant. Co-author Ori Menashe starts the book with a how-to guide to creating some of his tried-and-true, flavor-boosting add-ons, the ones that so frequently separate restaurant cooking from home cooking (parsley breadcrumbs, ricotta, fish sauce vinaigrette) before moving on to a greatest-hits list of dishes. Co-author Genevieve Gergis, the restaurant’s pastry chef, shares ideas that cry out to be baked: chocolate budino tarts, roasted banana ice cream, maple-ricotta fritters. So good, right?

The cooking-for-one cookbook is often just a few sad-sack steps away from a “Cathy” anthology fortified with recipes. Enter New York City chef Anita Lo. In “Solo: A Modern Cookbook for a Party of One” (Alfred A. Knopf, 240 pages, $28.95), the chef/owner of the former Annisa combines humor (“I put the ‘Lo’ in ‘solo,’?” she writes), a well-stamped passport and an instinctual distaste for waste into a global roster of uncomplicated, chef-driven dishes that are a far cry from microwaved frozen dinners.

It’s a small book packed with big ideas, from linguine with mussels and saffron to make-ahead pork-and-garlic dumplings. “Sure, making your own dumplings is time-consuming,” she writes. “You’ll be rewarded with a well-balanced, home-cooked meal in a plump little package that can be ready in minutes for upcoming nights when you don’t feel like cooking.” That philosophy works for non-singles, too.

What’s fascinating about “Levant: New Middle Eastern Cooking from Tanoreen” (Kyle Books, 224 pages, $34.95) is how a chef celebrates the flavors of her homeland (in this case, Palestine) while allowing the culinary melting pot that is Brooklyn to advance her notions regarding time-honored Middle Eastern fare.

“Cooking is about history and tradition, but to remain vibrant, a cuisine must also evolve,” writes Rawia Bishara, chef/owner of Tanoreen. “And my hope is that with this book we can do that together.” Expect to encounter a long list of vegetarian, vegan and gluten-free recipes.

A favorite new title isn’t a cookbook, but it’s immersed in a near-universally popular food subject: pizza. When in need of an insider’s guide to Chicago, forget about Yelp, TripAdvisor — or, for those going old school, Fodor’s or Lonely Planet — and use “Pizza City, USA” (Northwestern University Press, 166 pages, $24.95).

Author Steve Dolinsky — his pizza baptism was at Shakey’s in St. Cloud, Minn. — dined through a staggering number of Windy City destinations to compile this opinionated survey of what he convincingly argues is the nation’s most compelling pizzeria landscape. Deep-dish? Sure, but the research dives headlong into the deep end, revealing a hunger-inducing kaleidoscope of tavern-style, Neapolitan, stuffed, Sicilian, thin, artisan and Roman formats.

On the subject of pizza, noted Philadelphia chef Marc Vetri has teamed up with writer David Joachim to create “Mastering Pizza” (Ten Speed Press, 262 pages, $29.99), a serious — witness a chapter devoted entirely to flours — and highly useful exploration of the doughs that go into creating pizza, calzone and focaccia. The how-to photos (by Ed Anderson) are helpful visual guides, and Vetri fashions detailed recipes that leave nothing to the imagination, using equipment available to home cooks, including ovens, grills and a stovetop formula for a Neapolitan pizza that closely mimics its wood-burning oven counterpart.

Philadelphians are also behind a second must-have book. In “Israeli Soul: Easy, Essential, Delicious” (Houghton Mifflin Harcourt, 386 pages, $35), Michael Solomonov and Steven Cook — they’re the authors of “Zahav,” which won the James Beard Foundation’s 2016 Book of the Year honors and chronicles the food at their Philly restaurant of the same name — treat readers to a vivid culinary Israeli travelogue. Colorful and highly readable, it introduces the country’s United Nations-like range of flavors — and the people behind them — through well-observed storytelling and concise, uncomplicated recipes.

An Israeli chef, this time by way of London, is continuing his track record of turning out gotta-have cookbooks. In “Ottolenghi Simple” (Ten Speed Press, 308 pages, $35), Yotam Ottolenghi (he of “Plenty,” “Sweet,” “Jerusalem” and more) channels his considerable talents to suit the needs of time-pressed home cooks, creating a volume of easy-to-prepare recipes that will brighten any weeknight dinner or weekend dinner party. Most follow 10-or-fewer-ingredients and 30-minutes-or-less rules, and are imbued with Ottolenghi’s modern Middle Eastern sensibilities. Expect to encounter lamb and feta meatballs, roasted eggplant with curried yogurt, scrambled harissa tofu, spinach- and Gorgonzola-stuffed baked potatoes and other appealing ideas. Another bonus: Jonathan Lovekin’s clear-eyed photography.

“Chasing the Gator” (Little, Brown & Co., 240 pages, $35) is a cookbook in the form of a Cajun Country love letter. “Top Chef” fans will recognize New Orleans chef Isaac Toups, who shares charming tales (with writer Jennifer V. Cole) of his charmed life in Louisiana. A sample: “The first step in putting on a crawfish boil is: Get the beer. The second step is to get the crawfish. Third? Tell someone you’ve got beer and crawfish. The word will spread.” He then helps home cooks re-create the flavors of the region with concise, craveable recipes, including gumbo (three variations), crawfish bisque, dirty rice, boudin and other classics.

Back to Israel, by way of New Orleans. In “Shaya: An Odyssey of Food, My Journey Back to Israel” (Alfred A. Knopf, 414 pages, $35), Alon Shaya — with writer Tina Antolini — beautifully recounts the fascinating, peripatetic journey that led to his development as a chef. This cookbook-meets-memoir moves from his native Israel to Philadelphia, Emilia-Romagna, Tel Aviv and then New Orleans, a polyglot experience that makes for both riveting reading and inspiring cooking, with dozens of highly appealing recipes — date pancakes with rose tahini, curried sweet potato-leek pie, kale-andouille jambalaya — that illuminate Shaya’s singular career path. Buy two copies: one for the kitchen, the other for your nightstand.

Note: To toast almonds, place nuts in a dry skillet over medium heat, and cook, stirring (or shaking the pan frequently) until they just begin to release their fragrance, about

2 to 3 minutes. From “Shaya,” by Alon Shaya and Tina Antolini.

At the bottom of a large salad bowl, whisk together Dijon mustard, whole-grain mustard, vinegar, honey, salt and red pepper flakes. Chop cilantro and dill. Strip the leaves from the rosemary and thyme (discarding stems), and mince them along with the shallot and garlic. Add all of these ingredients to the bowl, then stream in the olive oil, and whisk until combined.

Peel away any tough outer leaves from the Brussels sprouts. Shred the sprouts until they look similar to slaw. Toss with the dressing and the raisins, and sprinkle with the almonds just before serving.

PASTA WITH PECORINO AND PISTACHIOS

Serves 4 as an appetizer.

Note: “For an extra twist of color, stir in some oven-dried tomatoes,” writes Yotam Ottolenghi in “Ottolenghi Simple” (Ten Speed Press, $35). Slice cherry tomatoes in half, toss with olive oil and some salt and pepper and roast at 350 degrees until semi-dried and slightly caramelized, about

In a bowl of a food processor fitted with a metal blade, combine

Reserving 2 tablespoons of water, drain the pasta and snow peas and place in a large bowl. Stir reserved pasta water into basil paste. Add basil paste to pasta and stir well. Add the pecorino, pistachios, lemon zest and remaining 1 cup basil, plus 1/8 teaspoon salt and a generous grind of pepper. Toss gently to combine and serve.