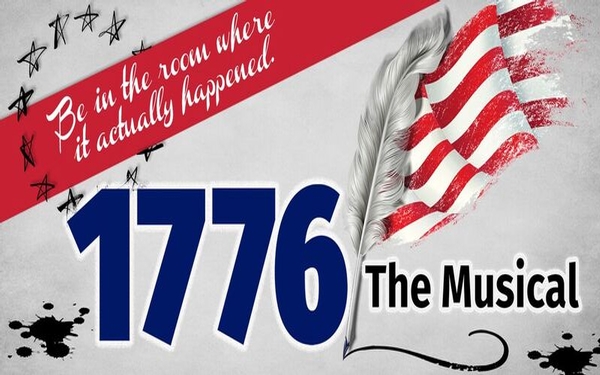 La Mirada Theatre for the Performing Arts & McCoy Rigby Entertainment (celebrating its 25th Silver Anniversary at the theatre) are thrilled to present the award-winning and revolutionary 1776 THE MUSICAL, with musical direction by Jeff Rizzo and directed & staged by Glenn Casale. 1776 THE MUSICAL will preview on Friday, January 11, 2019 (with a press opening on Saturday, January 12 at 8pm) and runs through Sunday, February 3, 2019 at La Mirada Theatre for the Performing Arts, 14900 La Mirada Blvd in La Mirada.

Before Hamilton, there was 1776 THE MUSICAL, the electrifying musical about the founding of America. Featuring a thrilling cast, this Tony Award-winning smash begins with a deadlocked Congress – sound familiar? Its attempts to adopt the Declaration of Independence are boiling over in heated confrontations. Spoiler alert: by the evening of July 2nd, the two sides are still miles apart!  But remarkably, these contentious Founding Fathers harness their shared determination to do the right thing for a fledgling nation. See how they get it done!  Engaging, tuneful, witty and passionate, this Broadway musical shows us the likes of John Adams, Benjamin Franklin and Thomas Jefferson as we’ve never seen them before — with humor and humanity. Irreverent and topical, 1776 THE MUSICAL is the musical that celebrates what truly made America great…in the first place.

ABOUT THE CREATIVE TEAM AND CAST

JEFF RIZZO (Musical Director) has conducted countless musicals in many U.S. cities, Japan, and China. Recently: White Christmas at the Ordway Center in Saint Paul, H2$ and Mary Poppins at TUTS in Houston, and Cabaret at the Sacramento Music Circus. Jeff experienced the 2011 Tokyo earthquake and the nuclear meltdown doing Joseph and the Amazing Technicolor Dreamcoat. He toured China in 2007 with 42nd Street, as well as the two-year run of the 2002 US National Tour, which played Segerstrom Hall and the Ahmanson Theatre. Jeff was the audition accompanist for the film of Dreamgirls. He musically directed Madison Square Garden's The Wizard of Oz starring Roseanne, the subsequent national tour, and the Grammy-nominated cast recording starring Mickey Rooney and Eartha Kitt. He was associate conductor of the US premiere of Sunset Boulevard starring Glenn Close at the Shubert Theatre in LA. Jeff toured three years with Annie, as associate conductor of the 2nd National Tour and conductor of the 4th National Tour. He has served on the faculty of the American Music and Dramatic Academy (LA campus) for thirteen years. As a composer, his work includes the scores for Jailbirds on Broadway, Wanna Play?! (published by Baker’s Plays) and a new musical version of A Christmas Carol. With partner Eric Andrist, he co-founded the Musical Theatre Guild. Born in Utica, NY, raised in Sacramento, CA, and graduated from the University of Southern California,

The Design Team for 1776 THE MUSICAL is as follows: Scenic Design by Stephen Gifford; Lighting Design by Jared A. Sayeg; Co-Sound Design by Leon Rothenberg & Phil Allen; Costume Design by Shon LeBlanc; Hair/Wig/Makeup Design by EB Bohks; Properties Design is by Kevin Williams. The Casting Director is Julia Flores and the Production Stage Manager is John W. Calder III.

ABOUT THE SCHEDULE AND PRICING

Performances are Wednesdays & Thursdays at 7:30pm; Fridays at 8:00pm;

Tickets range from $20 - $84 (prices subject to change) and can be purchased at La Mirada Theatre’s website, www.lamiradatheatre.com or by calling the La Mirada Theatre Box Office at (562) 944-9801 or (714) 994-6310. Student, Senior and group discounts are available. $15 Student Tickets available for the first 15 performances of the production.

La Mirada Theatre for the Performing Arts is located at 14900 La Mirada Boulevard in La Mirada, near the intersection of Rosecrans Avenue where the 91 and 5 freeways meet. Parking is free.