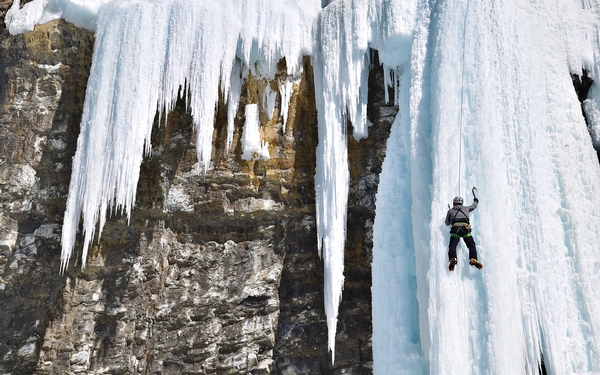 I’m not even halfway up an ephemeral ice wall in Banff National Park before I find myself, quite literally, on a slippery slope.

To my right is a sinewy gorge known as Johnston Canyon and the snow-covered hiking path from which I came. To my left are stunning pillars of frozen river water that blanket a craggy 100-foot cliff. I, of course, am precariously affixed to said cliff, and I’m clinging for dear life.

I’ve come to this unspoiled spot to take a stab at ice climbing, but I’m beginning to feel like some reject from the Marvel Universe with my hands and feet sporting spiky weapons that I’m not quite sure how to use.

“Kick your crampon into the ice like you’re angry,” my teacher, Larry Shiu, screams from down below.

I do as I’m told, and frozen water crystals tumble into the riverbed. My newly firm attachment means I’m now closer to the radiatorlike wall, but I refuse to let the finger-tingling temperature get to me. I need to focus on the task at hand: hook my ice ax into a higher perch and continue my vertical march upward.

Shiu tells me to think of the ax like a fly-fishing rod.

“Flick your wrist,” he shouts as I sink the tool into the blue-gray ice, allowing me the leverage I need to push onward and upward. I quickly gain confidence and race to the top where, harnessing the power of my newly weaponized extremities, I pause to take in the full panorama.

My journey into — and up — this stunning canyon began a few days back with a flight to Calgary, an oil-rich city of 1.2 million in the province of Alberta. As my plane landed, all I could see was a dense cloud of white, as if a marshmallow puff of snow had been smushed up against the once-golden prairie. It took a 75-mile drive west to find the Canada of lore, where toothy Rocky Mountain peaks poke out over evergreen forests and fairy-tale turquoise lakes.

Banff is Canada’s oldest national park and a playground for climbers, boasting dozens of pristine ice routes, most of which are easily accessed from local roads. Add one of the longest seasons (December to early April) and most ideal climates for ice climbing, and you begin to understand why the area is regarded by many as the best place in the world to try this increasingly popular sport.

A 2017 report from the Outdoor Foundation found that outdoor climbing was one of the five fastest-growing adventure sports, with ice climbing forming a sizable chunk of that growth (thanks, in part, to cheaper and more widely available equipment). Its popularity has soared by more than 20 percent over the past three years, and there’s even talk of making it an official sport in the Winter Olympics.

I’ve come to Banff to see what all the fuss is about on a two-day experiential course with Yamnuska Mountain Adventures (prices starting at $150 a day). But things aren’t going as glowingly as planned.

I commiserate with a fellow classmate that evening over dinner at the Chiniki Cultural Centre, a museum-cum-restaurant of the Chiniki First Nation people. As we chow down on some hearty fry bread “tacos” topped with elk meat, my classmate shows me a post she’s just put on Instagram. In it, I’m dangling off the ice wall with the kind of body posture people might assume if they were using a toilet.

It seems my technique really is crap.

I rest my head for the night in a plush bed at the Fairmont Banff Springs Hotel, a castlelike affair built in the 1880s to lure vacationers westward along the Canadian Pacific Railway, before heading out to the ice the following day, determined to right my wrongs.

Johnston Canyon is a sharply hewn river valley lined with quaking aspens and lanky lodgepole pines. To get back to the ice wall, I have to crunch snow for about 45 minutes, walking like a cowboy to avoid daggering my pant leg with the razor-sharp crampons on my boots.

Along the way, I ask Shiu what went wrong yesterday, explaining that I seem to be much more adept at rock climbing.

“Rock climbing is usually easier to pick up because you just use your feet and hands to grab and go,” he explains. “In ice climbing, you have to figure out how to swing your ax and kick your crampons into the ice, so there’s a bigger learning curve.”

Shiu suggests that I work on maintaining a perfect triangle on the ice, with my feet spread wide and my ice tool above my head in the center. “This is the most stable body position,” he says. “When you get the three points fixed, you have one more ice tool that is free to swing higher and build your next triangle.”

With that in mind, I harness up and give it a go. Instead of straining my Popeye muscles to race up the wall, as I did yesterday, I focus on slow, controlled movements. A few climbs in, I’m feeling much less crappy.

I realize after a successful second day that I’m so used to a city life that requires speed for efficiency that it was initially hard for me to slow down. But ice climbing isn’t about speed; it’s about carefully calculated moves. It’s this wonderfully meditative mind game where speed can be your enemy.

Ice climbing is also about trusting the unknown, another thing I’m not terribly great at. You have to trust that a tiny crampon spike will support your weight, and that a piece of frozen water isn’t minutes from melting in the afternoon sun.

If you can suspend your disbelief for a few hours, your reward is not only an intimate connection with nature, but also the chance to be a D-list superhero, at least for a while.

(Mark Johanson is a freelance writer.)